Some influential conservatives are now saying the health care law is too entrenched to repeal. Take the U.S. Chamber of Commerce, the powerful business lobbying group. When the Affordable Care Act Passed in 2010, the Chamber got behind a major business lawsuit to fight it at the U.S. Supreme Court. And in January, 2011 during his annual State of American Business address, Chamber President Tom Donohue said, “It’s time, in my opinion, to go back to the drawing board…and thus we support legislation in the House to repeal it.”

But now, he’s striking a different tone: “We’re not going to get rid of that bill, and so we’re going to have to devise ways to make it work,” he said at a recent press conference.

While some business writers called that “a striking about-face,” and a “Nixon Goes to China moment,” Avik Roy, former health policy advisor to Mitt Romney and Forbes opinion editor says, says: Not so fast. 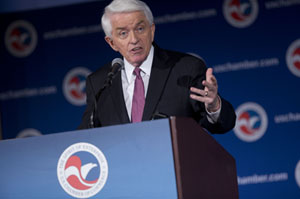 “He didn’t say that he opposes repeal,” Roy says about Donohue’s statement. “He just didn’t think repeal was realistic in the next several years.”

Roy says business groups like the Chamber have to be pragmatic and deal with the world as it is, not as they’d like it to be, which is why the Chamber is now focusing on changing specific parts of the health care law they don’t like, rather than repealing it.

“It’s very difficult once a law that transformative has been in effect for seven years to repeal it,” Roy says. “I think there are more attractive ways to achieve the goals of conservatives than repeal and replace.”

The Chamber of Commerce and Roy say they remain committed to fighting the health law. The Chamber wants specific items thrown out, like the requirement, beginning in 2015, that employers with more than 50 workers provide health insurance or pay a fine.

Roy says conservatives could accomplish more by using Obamacare to push for transformation of all government-funded health care. “The ACA is really an important but smaller portion of the overall reform picture. And I think what’s happened with a lot of the more populist conservatives is that there’s not necessarily that appreciation for how much the government’s already involved in the health care system through programs like Medicare and Medicaid,” he believes.

Conservative activist Erikson says the traditional GOP needs to be taught a lesson in the 2014 primary elections. “The single biggest thing you can do to get the Republicans back on the right and straight path is to support [tea party-supported] Matt Bevin against Mitch McConnell in Kentucky,” he said.

Erickson also urges financial contributions to conservative primary challengers in Georgia, Mississippi, Nebraska and other states. That means some Republican candidates will face heat from the right for not doing more to repeal Obamacare, at the same time they’re fighting Democrats who say they aren’t doing enough to help make the law work better.