Eric Russell, 24, recently joined a health support group for young Latino and black gay men, where he learned about the HIV-prevention pill known as PrEP. He resisted the medication at first, convinced he didn’t need it and fearful that taking it would stigmatize him.

But after Russell learned more about PrEP, short for pre-exposure prophylaxis, he decided it would be a good investment in his health. The Los Angeles man started taking the drug this year and now encourages other young minority men to do the same.

“A lot of people won’t necessarily tell you their [HIV] status,” said Russell, who is on Medicaid, the public health insurance program for low-income people. “You have to look out for yourself.”

Medicaid beneficiaries in California are taking the HIV-prevention pill in greater numbers than ever before. Across the United States, PrEP use is also rising significantly, according to data released this week. Blacks and Latinos, however, have been slow to embrace the medication even though HIV infection rates among them are much higher than among whites.

In California’s Medicaid program, known as Medi-Cal, the number of PrEP users rose from 79 in the first half of 2012 — the year the drug was first approved for preventive purposes — to 3,295 by the end of 2016, according to a report released last month by the California HIV/AIDS Policy Research Centers.

Nationally, the number of PrEP users rose from 8,768 in 2012 to 77,120 in 2016 — an average annual increase of 73 percent in each of those four years, according to new data released by AIDSVu.org, an HIV website run jointly by Emory University’s Rollins School of Public Health and Gilead Sciences Inc., which manufactures the pill. Gilead told financial analysts in July 2017 that 136,000 people in the U.S. were taking PrEP, also known by its brand name, Truvada.

Truvada was first approved by the Food and Drug Administration in 2004 to treat HIV, then eight years later to help prevent it. It can reduce the risk of contracting HIV by more than 90 percent, according to the federal Centers for Disease Control and Prevention. If taken daily, the medicine’s presence in the bloodstream can prevent the HIV virus from taking hold and spreading in the body. It costs about $1,500 a month but is covered by Medicaid and many private insurers.

Wide ethnic and racial disparities persist in its use, however, with far less uptake among non-white Medicaid enrollees than among their white counterparts.

The authors of the California study found the rate of PrEP use among black Medi-Cal enrollees in 2016 was 37 percent lower than the white rate, even though new diagnoses among blacks are four times that of whites. Latinos had the lowest rate of PrEP usage among Medi-Cal recipients — about one-quarter that of whites — while their rate of new infection was 1.5 times higher.

That disparity exists nationwide as well, with disproportionately low use of the HIV-prevention pill among blacks and Latinos.

About 44 percent of people who could potentially have benefited from PrEP in 2015 were African-Americans, but only 1.4 percent of those — 7,000 out of about half a million — had prescriptions for PrEP, according to a new study released Tuesday by the CDC. And in a similar time period, a quarter of people who could have benefited from PrEP — nearly 300,000 — were Latino, but only about 3 percent of them had PrEP prescriptions, according to the study. Among whites who were candidates for the drug, 14 percent had prescriptions. 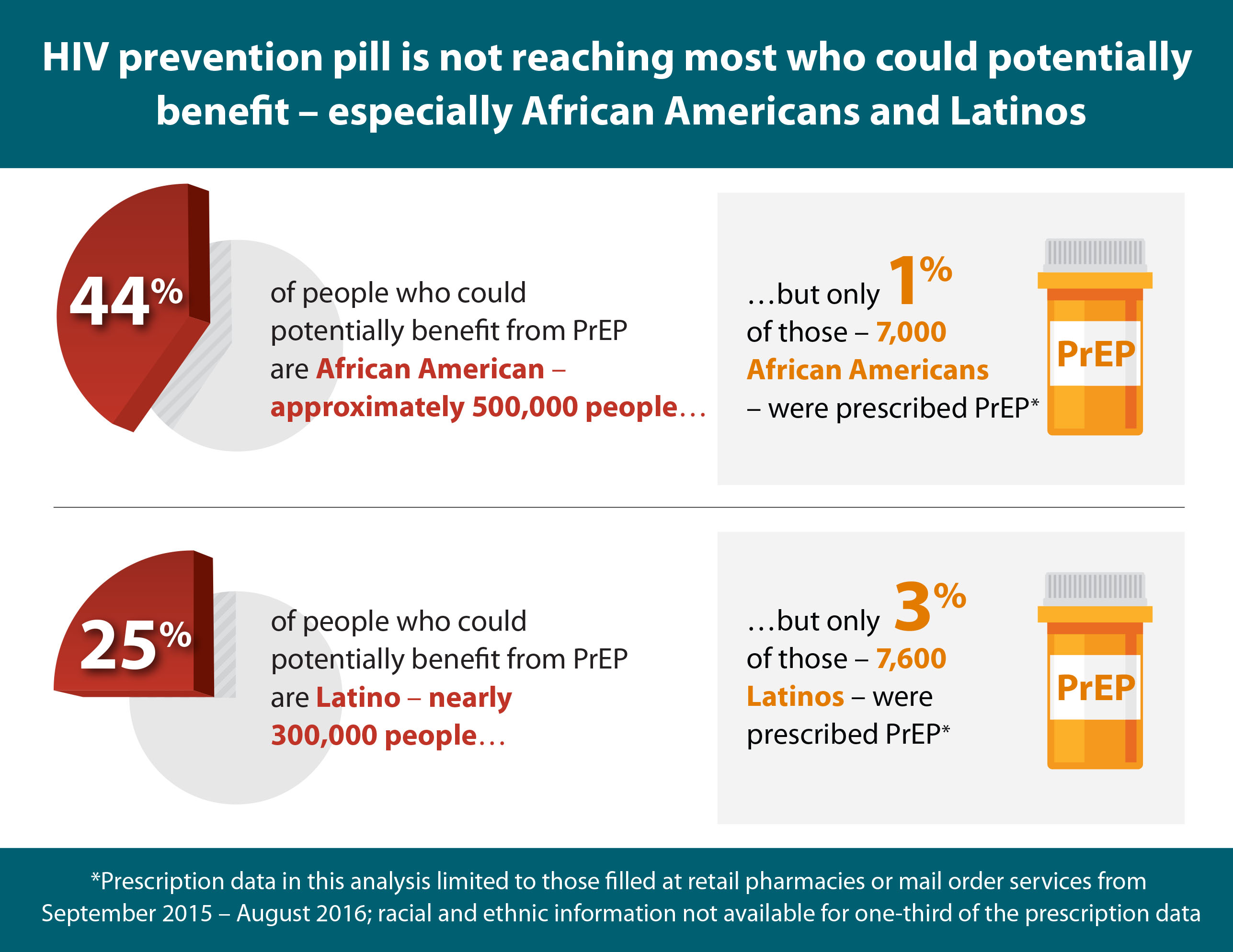 Disparities in use of the HIV-prevention pill are also geographic. Nearly half of all PrEP users reside in five states that account for 37 percent of the U.S. population — California, Florida, New York, Illinois and Texas — according to AIDSVu. The majority of new HIV diagnoses — 52 percent — are in the South.

The California researchers cited several possible reasons for the racial and ethnic disparities, including a lack of knowledge about PrEP, the perceived stigma of taking it, mistrust of doctors and an inadequate understanding — or denial — of the HIV risk. They also found disparities by age, with greater use among people 25 and older.

The report was based on 2012-16 data from the California Department of Health Care Services, which runs Medi-Cal. The report’s authors said studying PrEP use among Medicaid patients is important because they are particularly vulnerable to HIV infection and “might most benefit from public health policy interventions to support uptake” of the prevention drug.

The ethnic and racial disparities shown in the data are an important finding because of the role the pill can play in helping reduce new infections, said Nina Harawa, an associate professor at the David Geffen School of Medicine at UCLA, and the lead author of the California study.

“We are at this point where it’s really possible to turn the tide on new infections,” Harawa said. “PrEP is a huge part of the strategy to eventually get to zero cases of new HIV. We need to make sure resources around PrEP are being used wisely and getting to the right people.”

Hoping to encourage wider use of the drug, California eliminated a rule in 2014 that had required doctors to seek pre-authorization to prescribe it. State health officials say they believe that decision helped increase the number of prescriptions. Two years later, another law required that information about the HIV-prevention pill be provided to people who test negative for HIV.

Tony Cava, spokesman for the Department of Health Care Services, said the rise in PrEP prescriptions can also be attributed to outreach by advocacy groups and dissemination of educational materials in areas with residents at high risk of HIV.

More resources are needed to “redouble efforts to reach the communities that are impacted,” said Craig Pulsipher, another author of the study and a state affairs specialist at APLA Health, which sponsored the group that Eric Russell attended. 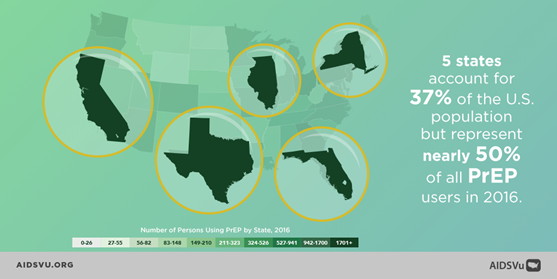 Such efforts paid dividends in New York, where the number of Medicaid enrollees using the HIV-prevention drug rose more than 300 percent in the two years from July 2013 to June 2015, following a statewide initiative to educate doctors and patients about it, according to a study published by the CDC in 2015.

Doctors play an important role in the uptake of PrEP, Pulsipher said.

Last year, the Los Angeles LGBT Center launched a campaign to educate black and Latino gay and bisexual men, as well as transgender women, about the HIV-prevention medication. The campaign began with volunteers distributing information about PrEP in West Hollywood bars, and has continued with art installations and conversations with people at gay pride and other events, said Paul Chavez, the campaign’s manager.

“What we found in our outreach was that a lot of people are not aware that Truvada actually exists,” Chavez said.

He said outreach workers must gain the trust of people who haven’t always felt comfortable seeking medical care, much less cared to prevent HIV. “Accessing health care can be overwhelming, period,” Chavez said. “You add these layers on top of this, and the barriers start piling up.”

Use Of HIV-Prevention Drug Grows, But Lags Among Non-Whites