Vermont Gov. Peter Shumlin, who was elected last November after promising to reform health care in the state, unveiled a bill  Tuesday that would abolish most forms of private health insurance and move state residents into a publicly funded insurance pool.

His much anticipated proposal lays out a strategy that leaves a number of key details-including how to pay for the system-open for debate. 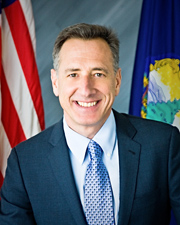 Under Shumlin’s “single-payer” system, Vermont residents would receive health benefits paid for by the state, regardless of their employment status or income. The plan is designed to help stem rising health costs, which state officials say have become unsustainable.

“Health care costs are climbing at a rate of more than 12 times the growth of the Vermont economy, and we’re not getting the best value for our money,” Shumlin said in a prepared statement. “The time for change has come.”

“It makes a lot of sense and it’ll save them a ton of money,” he said in an interview.

Some Democrats advocated for a national single-payer plan when Congress was debating the federal health overhaul that passed in March, but that plan was never considered politically viable because of widespread opposition and concerns about cost. Even efforts to offer a public option insurance plan that would compete against private insurers for consumers’ business failed after conservative Democratic senators refused to support it. Instead, the health law opted for tighter regulation of existing private plans, with a mandate that almost every American purchase health insurance.

Skeptics have questioned whether Shumlin’s reform agenda is feasible.  Lt. Gov. Phil Scott, a Republican, said before Shumlin’s bill was released that he had received letters from a number of state residents who have concerns.

“They’ve heard about the bill and they’ve heard the thoughts, but the devil’s in the details, and they’d like to see what it means to them,” Scott said.

The governor’s plan calls for creation of a health reform board this year to make recommendations for the plan. A full single-payer plan would not be operational before 2014.

Shumlin, a Democrat, has garnered some support for a health overhaul in the legislature, where Democrats overwhelmingly control both houses. The legislature had already commissioned Harvard economist William Hsiao, who helped design Taiwan’s single-payer system, along with MIT economist Jonathan Gruber and Vermont policy consultant Steve Kappel to provide recommendations on how to reform Vermont’s health care system. Shumlin’s plan takes many of those recommendations into account.

But Republicans in the state have raised concerns and business groups have not yet signed on.  The state also will need to clear a series of administrative hurdles at the federal level.

The Need For Waivers

Shumlin’s strategy seeks to take advantage of federal resources that will kick in under the new health law in 2014. By that time, every state is expected to have its own “health exchange,” an online marketplace where consumers can shop for private health plans that meet new federal standards. Shumlin’s proposal involves using federal funding to build an exchange infrastructure that could later be converted to support the single-payer system.

But because a single-payer plan is not sanctioned in the health law, Vermont would also need to secure waivers from the federal government in order to move forward with its plans.

“At each step of the way, we may be dealing with constraints as far as federal law, and march forward,” said Anya Rader Wallack, Shumlin’s special assistant on health care reform.

The federal health law allows states such as Vermont to request waivers to opt out of many of its requirements starting in 2017, so long as they present an alternative that would achieve the same goals-broader health coverage for more people-with equal or greater success.

But Vermont legislators, fearing that support could shift against single-payer during the next election cycle, don’t want to wait another six years to deliver their reforms. They’re hoping they’ll be able to opt out of the health care law sooner.

That puts Vermont in a delicate position: for now, at least, the state will need to work out a plan to comply with the federal health law while simultaneously laying the groundwork for its own plan.  To make matters more complicated, Vermont officials would also have to work with federal officials to make critical payment adjustments within Medicare, the federal health program for seniors and disabled individuals.

Funding Is An Open Question

The governor’s team has not yet devised a way to pay for the new system. They plan to return to the legislature in 2013 with proposals, according to Wallack.

Hsiao and colleagues had earlier recommended that the state levy a payroll tax divided between employers and employees-an idea that raised alarm bells with small business owners.

Among them is Scott, who also owns a construction company. “I understand some of the arguments for this type of system [were] to take the burden off employers and I guess I’m not seeing where that burden is being moved,” Scott said.

Rick Rayfield, who owns a bookstore in Waitsfield, is tentatively in favor of a single-payer system-but wants to see how the legislature hammers out key details.

“It seems to me we’re trying to develop a philosophy about who pays for healthcare without asking ourselves exactly what we’re willing to pay for,” he said.  “We’re being asked if a single-payer system is something we would like without saying what we’re going get for it.”

Still, Rayfield sees some advantages. “I guess I’m so overwhelmed by the stupid complexity of the (current) system as it is that I just adore the simplicity of the single-payer plan,” he said.

Supporters of the change say the need is dire. They point to statistics showing that health spending more than doubled in Vermont between 1992 and 2009. Shumlin’s office has estimated the state would save $500 million in the first year of a single-payer plan.

That would come from reduced insurance marketing and administrative costs. Hospitals and physicians also lose time and money in filling out claims information for every private health plan they bill.

Shumlin’s plan recommends paying physicians and hospitals in a way that encourages them to provide higher quality care without providing unnecessary services.

“There’s a lot of smart things the governor’s doing,” Dean said. “The smartest thing of all is that he’s saying, ‘We’re not going to come up with funding mechanism until we change the payment system.'”