Vermont lawmakers are taking steps to move the state toward a publicly-financed insurance program and craft a state health exchange, which is required by the 2010 federal health law and which state officials hope to use as the groundwork for their eventual move to a unique single-payer system. 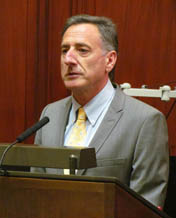 Gov. Peter Shumlin’s administration this week offered a bill to the legislature that lays out a plan for building the exchange, a type of marketplace for individuals and small groups to buy health insurance. The proposal would combine the small group and individual health insurance markets, would bar the sale of health insurance to individuals and small employers outside of the exchange and would define a small employer to be 100 employees or fewer instead of 50, which had been under consideration. The bill also seeks to clarify how the state should integrate Medicaid, the state-federal health program for the poor and disabled, into the exchange.

Under the new system, an independent five-member panel called the Green Mountain Board will also be in charge of reviewing hospital budgets and defining final Certificate of Need as well as making health insurance rate decisions. That board is also working on a transition to a single-payer health system.

Shumlin, a Democrat, put Vermont on a path to single-payer health care last spring by signing a bill, known as Act 48, which seeks to create a new publicly funded and run health program called Green Mountain Care to replace the traditional insurance programs currently offered in the state.

Deb Richter, head of Vermont for Single Payer, stressed that the ultimate goal is to create a single-payer system, saying, “I look at this as we want to strengthen the exchange so that as many people can get broad coverage that’s affordable in the meantime.”

Vermont has several other key decisions to make, including how to pay for a single-payer health system. The state has held four public meetings in recent months, where people offered their financing recommendations, and is looking at how other countries, particularly Switzerland and Germany, finance their health systems, Lunge said.

In recent years, nearly a dozen states have introduced some type of single payer type legislation, according to Physicians for a National Health Program, but Vermont has been the only state to get this far.

For instance, California advocates saw their push to pass single payer legislation delayed Tuesday when the Senate Appropriations Committee postponed a vote after legislative analysis showed the state-funded program could cost the state general fund $200 billion a year, according to the Los Angeles Times.

Vermont Moving Forward With Its Own Flavor Of Health Reform