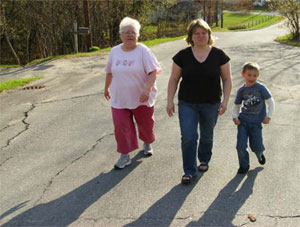 LYNDONVILLE, Vt. — When Rita Pinard learned she had diabetes three years ago, she never imagined she would end up in an ambitious experiment that has become part of the national health care debate.

Initially, she didn’t think her diagnosis was all that bad. Her physician, Dr. Joyce Dobbertin, didn’t seem alarmed. “She gave me a spiel about losing weight and exercising and told me to come back in three months,” says Pinard, 57, who promptly ignored the lifestyle advice.

But in January, when Pinard’s blood sugar shot up, Dobbertin took a different approach. She turned her patient over to a nurse, a dietician and a diabetes educator who alternately encourage and nag Pinard to take steps to control her disease.

Pinard’s case is part of a state effort to improve care and reduce costs for the chronically ill. Under the approach, primary care doctors get extra money to put together teams, which might include nutritionists and behavior specialists, to treat people with illnesses such as diabetes, asthma and heart disease. They get bonuses if their patients show progress.

This coordinated approach, called “medical homes,” is being tried in Pennsylvania, Wisconsin and Maryland and other states, and is a major issue in the health care overhaul being debated in Washington. President Barack Obama, Senate Finance Committee Chairman Max Baucus, D-Mont., and others have stressed the importance of treating chronic illnesses more effectively.

The goal is to begin shifting the health care system from one designed to respond to urgent episodes, such as heart attacks, strokes and broken bones, to one that provides better care for chronic conditions-or, better yet, prevents those problems.

The approach is showing promise. North Carolina and some other states say their efforts are saving money. And early data from the Vermont program-called Blueprint for Health-show that diabetes patients are achieving slightly better control of their blood glucose levels after just one year-an improvement health experts hope will translate into fewer costly complications.

Still, putting the programs in place on a national basis will not be easy. Inevitably, the programs touch on hot-button issues involving how doctors are paid and health care is organized and delivered. And what works for any individual state could very well flop for the nation. For example, Vermont, with only 623,000 people, is far less ethnically and economically diverse than many other states or the U.S. as a whole.

Improving chronic disease care also means changing ingrained patterns. Primary care and specialty physicians must figure out how to work together better and accept payment changes that reward them not for how much they do but for how healthy they manage to keep their patients. Patients need to work to prevent illnesses rather than just relying on doctors and pharmaceuticals for cures, according to experts.

There is ample evidence that better treatment is needed for chronic diseases, which are responsible for seven out of 10 deaths in the U.S., and eat up 75 percent of health care dollars, says the Centers for Disease Control and Prevention. Some 23.6 million Americans, or 8 percent of the population, have diabetes, and nearly two-thirds of those don’t have their disease under control, according to the American Diabetes Association.

Part of the problem: Many primary care physicians are ill-equipped to deal with chronic illnesses, experts say. When a patient is newly diagnosed, the doctor often takes 10 or 15 minutes to explain a complicated condition, talks up the benefits of a healthier lifestyle, maybe writes a prescription, and tells the patient to come back in three months.

Testing The Model In Vermont

In Vermont, the medical home concept is being tested in two Vermont communities–rural St. Johnsbury, where Dobbertin works, and urban Burlington. Physicians get state grants to put together chronic-care teams that focus on nutrition, exercise and behavioral health.

The goal is to allow doctors to provide services that usually aren’t covered, says Elliott Fisher, director of the Center for Health Policy Research at the Dartmouth Institute for Health Policy and Clinical Practice.

Providers also get bonuses from insurers if the patients make progress according to national quality measures. “All providers in a practice have a stake in having a higher score,” says Dr. Craig Jones of the Vermont Department of Health.

Beyond that, providers in four other communities are focusing on diabetes prevention as a first step toward becoming full-fledged medical homes. The goal is to expand the medical-home concept across the state.

In Pinard’s case, her blood glucose numbers stayed in the safe range for more than two years after diagnosis, and she remained mostly sedentary and overweight. But when her blood sugar rose a few months ago, Dobbertin, a doctor in a group practice, sent her to Mitya Schoppe, a nurse who is the chronic care coordinator for the group’s eight health care providers.

Pinard, who works in an office at a local hospital, was shaken by Dobbertin’s increased concern. “I was devastated,” she says.

Pinard’s team drew up a treatment plan, listened to her concerns and gently nudged her with phone calls, e-mails, clinic visits or home visits to eat better and to exercise. She met with Shauna Brittell, a community health educator, who came up with a walking program. She had weekly meetings with Ginny Flanders, a registered dietician who carefully explained the role of carbohydrates in Pinard’s diet, gave her a glucose meter and told her it was best to eat carbohydrates early in the day.

“I had never been told how to lose weight, or what to eat,” Pinard says. “I couldn’t believe they had people like that who could sit and talk to me about what I needed.”

The Vermont program began in 2003 with just $145,000 from the state legislature. In 2006, the program became a part of the state’s comprehensive health overhaul, which is designed to ensure that 96 percent of residents have health insurance by 2010. The state’s three major health insurers, Blue Cross-Blue Shield, MVP Health Care and Cigna, are required to help pay for the program. Last year, the total funding for the program was $4.8 million.

The team approach makes for a more gratifying job, says Dobbertin. “It’s no longer just me seeing patients appointment to appointment,” she adds, saying she acts as a quarterback, calling the shots but leaving the execution to others.

Physicians have always wanted to follow up with their patients, “but they don’t have the time or resources,” says Ken Thorpe, chairman of the department of health policy and management at Emory University and executive director of the Partnership to Prevent Chronic Disease, a coalition that focuses on the economic impact of chronic disease. Thorpe has worked for the state as a consultant on health care overhaul efforts.

But changing payment methods to funnel more money to primary care doctors raises sticky questions. “The long-term question needs to be asked: What is fair pay? What is a reasonable income?” says Fisher.

Some specialty care doctors may resist, says Hoangmai H. Pham, senior health researcher at the Center for Studying Health System Change, a nonpartisan research organization in Washington. “They’re concerned that eventually the money will have to come from somewhere, including their own reimbursement,” she says.

Indeed, both specialists and primary care physicians are adamant about expecting payment to coordinate care, according to an April study by the research organization.

Figuring out exactly how to set up a medical home is a challenge as well. Physician groups can look for guidance to standards set by the National Committee for Quality Assurance, a Washington nonprofit that provides quality measures of health care organizations. But most of the guidelines have yet to show proven results, says Pham. And some aren’t clearly defined.

These days, Pinard is a believer. She has lost 24 pounds since January, when her care was put in the hands of a medical team. Most evenings, she walks three miles, often with her daughter and grandchildren. “I didn’t go into this expecting people to cure me,” she says. “I know diabetes is mean to people. I don’t want to be babied. They’re part of my team, but I’m doing all the work.”

Living In A ‘Medical Home’