If the 2010 health law is upheld by the Supreme Court, it would extend health coverage to thousands of the nation’s veterans, a new study says. 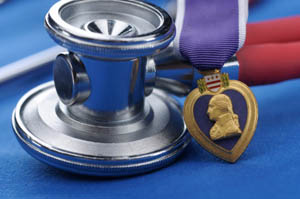 “It is striking how many of the uninsured veterans would qualify for Medicaid under the ACA,” said co-author Genevieve Kenney, senior fellow for the non-partisan Urban Institute.

One in 10 of the nation’s 12.5 million non-elderly veterans report not having health insurance coverage and not using the Veterans Affairs health system, the study reported.

There are about 1.3 million uninsured veterans nationwide. Another 900,000 veterans use VA care, but have no other health insurance coverage. An additional 900,000 adults and children in veterans’ families are uninsured.

The study, funded by the Robert Wood Johnson Foundation, said the uninsurance rate of veterans is lower than among the nonelderly population as a whole (10.5 percent compared with 17.9 percent).  Nonetheless, 41 percent of uninsured veterans report having unmet medical needs, while nearly 34 percent say they have delayed care due to cost.