Devereaux recalled that months earlier, during a routine exam, he found crushed fragments of painkiller pills inside the patient’s nose. Though he refused to prescribe more, Devereaux worries that the man is still getting the drugs and has not recognized his problem or gotten treatment for his addiction.

That story is common here. “There are a lot of patients in denial. … It’s a lot of families that have suffered horribly from this.” And their need for help has not been addressed. “We don’t have enough psychiatrists,” he said, which is also true about addiction specialists. “The mental health issues aren’t going to go away.”

But some health professionals as well as the federal government think they may have a possible solution: using telemedicine to connect patients in need by video chat with faraway physicians who know how to treat addiction.

It’s part of a larger project to fight the opioid epidemic in hard-hit rural areas such as Appalachia. This summer, the federal government directed $1.4 million to five pilot projects located in southwest Virginia as well as Tennessee and Kentucky. One will be run by Carilion Clinic, the health system that operates Devereaux’s practice, along with other local hospitals and medical practices.

“This is an obvious potential direction to move in,” said Colleen Barry, a professor of health policy at Johns Hopkins University and co-director of its Center for Mental Health and Addiction Policy Research. “There are some real opportunities — and some pretty significant challenges.”

The initiative comes as the nation’s addiction to prescription painkillers remains at epidemic levels. In 2014, the most recent year for which data is available, more than 14,838 people died from overdoses of drugs such as oxycodone, according to the Centers for Disease Control and Prevention.

In Virginia, about 4.6 percent of the state population — around 380,000 people — abused the drugs in 2015. Almost 600 people across the state died from prescription opioid overdoses between the start of 2015 and last March, according to the state medical examiner’s office. Two were in Giles County, population 17,000.

A pair of little-known addiction treatment programs are one country over — although more than 24 miles from Pearisburg, where the Giles County mental health clinic offers only basic counseling and child psychiatry. With no closer option for adult psychiatry, some local physicians have turned to telemedicine.

Carilion Clinic, for instance, offers remote psychiatry at Devereaux’s clinic, allowing a Roanoke-based psychiatrist to consult with patients who use a tablet screen in the exam room.

Devereaux said he wasn’t initially sure how patients would respond — he guesses less than a fifth have wireless internet at home. So far, he said, people like the service. Preliminary numbers support that, said Dr. Thomas Milam, Carilion’s interim chair of psychiatry and behavioral health.

But translating this model to painkiller addiction faces significant regulatory and logistical hurdles.

For starters, the meds needed to treat opioid addiction require complex in-person procedures and regular follow-up, limiting what can be done remotely, said Dr. Richard Merkel, an associate professor of psychiatry and neurobehavioral science at the University of Virginia in Charlottesville, another government pilot site.

Both the prescribing and monitoring of those medications have “to be done face to face, by a physician who has been licensed [by the Drug Enforcement Administration]. That’s a barrier,” he said. One idea UVA is considering is to set up “regional centers” where patients can go for medications as they wean themselves from opioids. 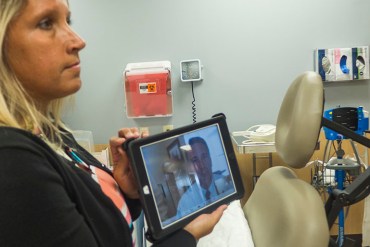 Thomas Milam, the interim director of psychiatry and behavioral health at Carilion Clinic, is based in Roanoke, Va. But if patients in Pearisburg need a consult, he will teleconference in, appearing on a screen like the one held by Michelle Dowdy, the office manager at Giles’ family medicine clinic. (Shefali Luthra/KHN)

Carilion is pushing its doctors in Giles and other rural clinics to become licensed to prescribe suboxone, one of the drugs that can treat opioid addiction. Medical residents at the system’s flagship hospital in Roanoke are required to get DEA certification. The hospital is also sending two specialists to its clinics to train interested providers, Milam said. Currently, Devereaux said, the nearest physician who can prescribe suboxone is 30 miles away. But many patients in need have limited means, so cars and gas are viewed as luxuries.

Meanwhile, in rural areas such as Pearisburg, where specialists generally are harder to find, family doctors often take on all sorts of health care needs. Managing an opioid abuse patient’s suboxone regimen absorbs time for doctors who are already spread thin, said Dr. Wanda Filer, board chair and former president of the American Academy of Family Physicians, and a practicing doctor in York, Pa.

“These patients require a substantial amount of resources,” she said. “We need a lot more hands on deck to do the work, so the onus doesn’t fall on one practice or one provider. Particularly in rural America, where there are so many competing demands.”

Devereaux has about 2,500 patients. He sees between 25 and 30 per day, many of whom have multiple chronic illnesses. Treating patients for drug addiction — and providing that medication regimen — is a task he’s not sure he could add.

Payment is another challenge. The government grant covers technology improvement costs, but not treatment itself. Hospitals and health systems have to negotiate with different insurance plans to make sure they will pay for the telemedicine-based care. This could leave many patients, Malim said, paying out of pocket for the counseling and follow-up sessions as well as the suboxone, which can have a price tag of $200 a month.

Even if insurance plans cover the treatment, many people don’t have coverage. That puts a strain on patients and limits what hospitals can do.

“We’re trying to hire more faculty and advanced nurses, but unless there’s reimbursement at some level, we just can’t do that,” Merkel said. “All of this becomes just a nice idea.”