Since retiring four years ago, Barbara Corprew has visited Paris, traveled to a North Carolina film festival and taken Pilates classes, focusing on — as she puts it — just “doing things for me.” Now the former Justice Department lawyer, who worked on white-collar crime cases, is devoting time to something completely different: She visits nursing homes every week.

Corprew is a volunteer in the District of Columbia’s Long-Term Care Ombudsman’s Office, a government-funded advocacy agency for nursing home and assisted-living residents.

Ombudsman’s offices, which operate under federal law in all 50 states, Washington, D.C., Puerto Rico and Guam, investigated 200,000 complaints in 2015, according to the Administration on Aging, a part of the Department of Health and Human Services.

Of those, almost 117,000 were reported to have been resolved in a way that satisfied the person who made the complaint, and about 30,000 were partially resolved. At the top of the list were problems concerning care, residents’ rights, physical environment, admissions and discharges, and abuse and neglect. 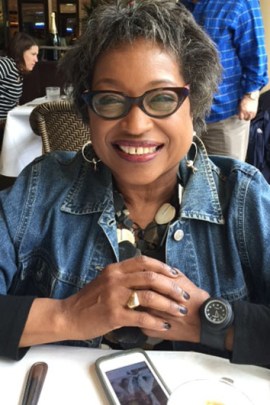 Barbara Corprew, a former Justice Department lawyer, says her service as a volunteer ombudsman was sparked in part by her experience acting as an advocate for her parents when they became ill. (Courtesy of Barbara Corprew)

The volunteers have permission to enter any nursing home, assisted-living or other long-term-care facility anytime, unannounced, talk to any resident and go wherever they want. They respond to issues raised by residents and their families and can bring up problems they discover. All complaints are handled confidentially, even kept from family members, unless residents allow the volunteer ombudsmen to reveal their identities.

“I know how important it is to find people who care and give good quality care,” said Corprew, who was an advocate for her parents when they became ill. Her mother was in and out of the hospital and a nursing home during her last years of life. So when she received a letter about the need for volunteer ombudsmen, the appeal hit home. “This was an opportunity to give back to the community and feel as if I was making a difference by representing people who didn’t have a voice.”

She is assigned to a nursing home in northwest Washington. She wears sturdy lace-up shoes for the trek through the hallways, knocking on doors to speak with residents in their rooms. She has handled problems involving call bells that don’t work or are out of reach, noisy roommates and procedures for bathing a resident.

Corprew distributes brochures about residents’ rights and how to contact the ombudsman, writing her name on the front. And she uses all five senses on her rounds: When coming across a chair that smelled of urine, she recalled, “the nose tells you a lot.”

Most ombudsman programs around the country depend on volunteers. After completing two days of classroom sessions and field training and passing a criminal background check, volunteer ombudsmen in Washington, D.C., spend about three hours a week at their assigned facilities and attend monthly update meetings for at least a year. Some stay in the program much longer. The Northern Virginia Long-Term Care Ombudsman Program includes people who have been volunteering for 17 years, including one woman who is almost 90, said coordinator Lisa Callahan.

Medical or legal experience is not required. Volunteers come from all kinds of backgrounds and careers, but they seem to have one thing in common: an abundance of compassion.

Gwendolyn Devore, another Washington volunteer, remembers a forlorn woman sitting in a hallway at the nursing home where her aunt lived. When she asked a staff member about the woman, the only reply was an angry look that unmistakably said, “It’s none of your business,” Devore recalled as she explained her interest in becoming a volunteer. “Now no one will be able to say it’s none of my business.”

Many nursing home residents have some degree of dementia or other disabilities that make it difficult for them to be their own advocates, while others don’t know whom to approach or how to seek help. Many don’t have relatives or friends nearby. An ombudsman can help fill that gap.

The volunteers are supervised by staff ombudsmen who can take over when a complaint can’t be resolved informally. Although ombudsmen cannot force facility management to follow state and federal laws, “we know the rules inside and out,” said Eileen Bennett, program director of the ombudsman program in Maryland’s Montgomery County. When persuasion fails, ombudsmen can call in reinforcements by reporting problems to state health inspectors, fire departments, police or other agencies that can compel action.

Unlike some programs, the district’s ombudsman’s office has its own staff attorney, Mary Ann Parker, whose tasks include representing residents who are being discharged but want to stay.  Under a new federal law, nursing home administrators must give ombudsmen copies of all involuntary discharge orders.

Ombudsmen also differ in their responsibilities. In addition to investigating and trying to resolve complaints, the district’s ombudsmen can help families choose a nursing home or assisted-living center, although they don’t make recommendations. District staff ombudsmen will also field complaints from people who receive Medicaid-funded health care in their own homes, as do Virginia’s ombudsmen. Maryland’s staff ombudsmen do not.

Some volunteers occasionally drop out after discovering that spending time in a nursing home wasn’t what they expected. But the experience has made Corprew only more committed.

“We all need people to care for us when we can’t care for ourselves,” she said. “I may be in this same situation … and hopefully there will be other people who will care about me and will come see me and will be my advocate.”