Last night’s vice presidential debate provided contentious contrast on the issues of abortion and Medicare between Vice President Joe Biden and the Republican nominee, Rep. Paul Ryan. The candidates sparred over the role their faith plays in their positions on abortion and laid out their tickets’ visions for Medicare reform. 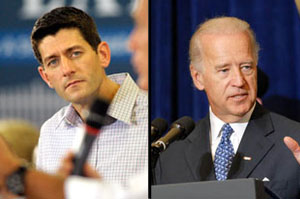 Here’s a sample of how some bloggers around the nation are seeing the debate:

At ThinkProgress, Alyssa Rosenberg provided questions that she was waiting for moderator Martha Raddatz to ask the candidates: “If you believe abortion should be illegal except in cases of rape, incest, or where the life or health of the mother is at risk, how would you enforce a ban on abortions performed for other reasons? What sentences would doctors who performed abortions or women who solicited them have to serve if found guilty of violating the ban? How would you fund enforcement mechanisms?” (10/12).

Irin Carmon at Salon says the way Raddatz framed the abortion question favored Ryan:  “She chose to frame the late-breaking, much-yearned for question about ‘social issues’ in just the way Republicans prefer: in terms of religion. … Everyone at Salon’s debate-watching party groaned, and with good reason. Please, let’s hear more from two religiously observant white men about their personal experiences with women’s reproductive freedom and access! It’s not that religion, or men, have no place in the debate over abortion rights; it’s that her question left women out of the equation from the start” (10/11).

Some others didn’t buy Biden’s defense of his abortion stance. At Hot Air, Ed Morrissey writes: “It’s nonsense to say as a government official that you believe that human life starts at conception but that you can’t act to protect it.   Certainly many people believe that human life does not start at conception, but that’s less science- and reason-based than the Catholic doctrine that opposes it” (10/12).

Both the Cato Institute and The Heritage Foundation had live blogs during the debate. At Cato’s Michael Cannon wrote of the candidates’ contention that Medicare must change: “Wrong. Medicare doesn’t HAVE to change. Congress can prop it up by doubling tax rates. Still appears the most likely scenario.” At The Heritage Foundation’s live blog, Alyene Senger writes: “The allegation that premium support in Medicare would cost seniors over $6,400 more is both wrong and misleading. Heritage expert Rea Hederman explains, ‘[T]his dollar amount is incorrect, and the charge is erroneous. Such false charges are based on an outdated Congressional Budget Office (CBO) model of House Budget Committee chairman Paul Ryan’s (R–WI) 2011 budget proposal.’ In fact, under Ryan’s current proposal, a senior would be guaranteed at least two health plans whose premiums meet 100 percent of the contribution amount” (10/11).

Avik Roy, at his The Apothecary blog at Forbes, also visits the premium support model that Ryan champions: “Ryan patiently explained that, under the competitive bidding model, not a single senior is exposed to rising health costs relative to the level of premium support. Biden kept interrupting Ryan so as to prevent him from completing his sentences, and then falsely claimed that Democratic Sen. Ron Wyden opposed the Romney-Ryan plan. Indeed, Ron Wyden supported a plan to the right of the Romney-Ryan plan” (10/12).

Finally, at HealthFlock, a blog at the Atlanta Journal-Constitution, health care attorney Elizabeth Richards examines if a Medicare voucher program would work. “The truth of the matter is that until one is put in place, we just will not know. However, it seems like a pretty decent idea to me. One thing is for sure, what we are doing currently is not working on multiple levels. It is not sustainable long term for its patients, and its rules and payment rates are not sustainable for the providers. … The best insurance policies are not one size fits all. The voucher plan, or premium assistance as the Republicans like to call it, will likely not cover the entire cost. I understand that this is a concern” (10/12).

VP Candidates’ Answers On Abortion, Medicare Get A Second Look