WORCESTER, Mass. — Dr. Dennis M. Dimitri, a family physician, runs a pretty unusual office. Few appointments are accepted in advance. Instead, patients call in the morning and are assigned a time slot later that day. Some patients even walk in without calling ahead.

The counterintuitive outcome of this lack of advance planning? No one has to spend weeks trying to wrangle an appointment, and once patients arrive, they rarely wait more than a few minutes for the doctor.

The End of the Doctor’s Waiting Room

That might seem mind boggling to those who have cooled their heels for 30 minutes, or an hour, in their doctor’s reception room — after waiting weeks to get the appointment in the first place. It takes an average of 63 days in the Boston area to get an appointment with a family physician, according to a 2009 survey by physician recruiters Merritt Hawkins & Associates, and 20 days on average for the nation as a whole. Once in the door, patients around the country typically wait 20 minutes or more to see the doctor, the American Medical Association found.

Those national waiting times are likely to become even longer when the health care overhaul extends insurance coverage to another 32 million people over the next several years. To help deal with this looming crisis, some health care experts are urging doctors to discard their appointment books and, like Dimitri, move to mostly same-day visits, otherwise known as open-access scheduling.

“Open access isn’t the solution to the inadequate number of physicians” — a major reason for difficulties getting appointments — “but it is a solution to an individual doctor’s overburdened practice,” he says.

Dimitri, 56, made the change four years ago after being named vice chairman of the Department of Family Medicine at the University of Massachusetts Medical School in Worcester. That meant less time for his private practice, and he wanted a way to accommodate patients without squeezing in way too many into fewer hours. Dimitri had learned about open access a year earlier from the Institute of Healthcare Improvement, an influential nonprofit organization in Cambridge. (IHI was headed by Dr.
Donald Berwick until his recent appointment to run the federal Centers for Medicare and Medicaid Services.)

“I was intrigued by the idea but a little afraid to pull the trigger,” Dimitri says. “Doctors like to come in and see a full schedule. Leaving a big piece of your schedule wide open every day seemed scary.”

Still, he took the plunge. Dimitri’s patients start calling at 9 a.m. and are assigned 15-minute time slots on a first-call, first-serve basis. Those who want a traditional scheduled appointment can try for two to three hours a day he reserves for advanced bookings, usually for annual physicals or patients who need regular follow-ups. A few slots are left open for walk-ins or emergencies. In a standard practice, emergencies would be squeezed into an already full schedule. 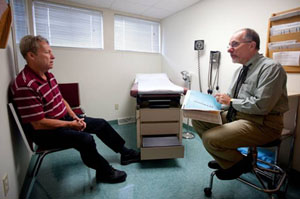 Dr. Dimitri sees patient James McMillan. Dimitri’s patients start calling at 9 a.m. and are assigned 15-minute time slots on a first-call, first-serve basis. The doctor prides himself on seeing his patients on time, and says his days are almost always full. (Erik Jacobs)

Dimitri’s office does no double-booking and has very few no-show patients. The doctor prides himself on seeing his patients on time, and says his days are almost always full.

He says most of his patients were happy with the change, although he admits that many of his elderly patients found same-day appointments daunting.

Stuart Lynn of Worcester, a 66-year-old retired college professor, says he first thought the change to open access a “bad move.” A patient of Dimitri’s for 23 years, Lynn says, “I still would prefer to have an appointment I can schedule around.”

But he acknowledges he has never had a problem getting in to see the doctor on the day he calls. Recently he called at 9 for his annual physical, and was told to come in at 9:30. He spent no time waiting in the reception area once he arrived. “I would have to say I’m pretty satisfied,” says Lynn.

The system works because of several simple factors. It reduces the number of patients who don’t show up for their appointments, or who call in with an emergency and plead to be squeezed in that day. Both numbers can be high in a traditional practice, so doctors regularly overbook and then fall further and further behind.

Also, doctors using open access usually see patients at consistent 15-minute increments, rather than the more common 10-minute intervals. Not all appointments take the full 15 minutes, so the doctor has flexibility if one patient needs more time or there are emergencies.

Advocates say quality of care can also improve, because patients’ problems are addressed immediately rather than weeks later. If a follow-up appointment is required, patients are told when to call in and office staffers place reminder calls or e-mails to make sure the patient follows through.

‘You Do Today’s Work Today’

The open access concept was developed 20 years ago at Kaiser Permanente, a large managed care organization based in California, by Dr. Mark Murray. “We had a huge access problem, with patients waiting forever to get an appointment and then waiting much too long in the office,” says Murray. He started talking to industrial engineers and realized that the same process that keeps factories running in sync with their supplies can work for a medical practice.

“You do today’s work today,” he says. Murray, who started his own consulting firm to promote the concept, says fewer than 20 percent of U.S. doctors’ offices use mostly same-day appointments.

The American Academy of Family Physicians created a subsidiary in 2006, TransforMED, which recruited 36 family practices — none in Massachusetts — to test open access scheduling and other strategies aimed at improving the patient experience. Surveys revealed that practices with open access garnered the highest patient satisfaction ratings.

Such results are beginning to catch the attention of wary doctors, says Boston consultant David E. Williams, co-founder of MedPharma Partners LLC. He said the new health law could start nudging physicians toward open access by providing for pay-for-performance bonuses.

“One of the things patients hate most are waiting times for appointments and waiting times in the office,” says Williams. “When doctors start getting measured on their performance, I think they will become more accepting of open access.”

Tired Of Waiting For the Doctor? Try One That Gives Same-Day Appointments