Mary Chiu was shocked by the bed sores on her 85-year-old mother.

One on her backside was so deep it exposed the bone; others formed on her left leg, heel and big toe. Half a dozen times, Sui Mee Chiu had to receive hospital treatment for the sores and bacterial infections. 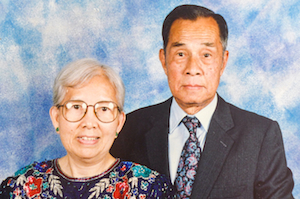 The wounds persisted for months, until the day she died in April 2012 of respiratory failure.

In September 2011, Mary Chiu sent a 7-page complaint to Los Angeles County public health officials requesting a thorough investigation of the nursing home where her mother had lived for nearly two years. That December, she sued the home, Arcadia Health Care Center.

The lawsuit is over: An arbitrator ruled that Sui Mee Chiu had been a victim of elder abuse, negligence and wrongful death and awarded her daughter more than half a million dollars. The public health department, however, still hasn’t finished its investigation.

As a result, when consumers check public records on nursing home quality, they won’t find any report of Chiu’s case at Arcadia.

“The investigation is still in process and Public Health is inquiring into the circumstances behind the delay in the final report and closure of this case,” according to a statement last week from the Los Angeles County Public Health Department. “Public Health regrets the delay and is working to reduce the time from initiation of investigations until closure.”

The case is just one example of hundreds in Los Angeles County and thousands statewide in which investigations by nursing home regulators have remained incomplete for months, sometimes years. There were 3,044 open cases in the county as of mid-March, 945 of which date back two years or more, according to an audit released last week by the Los Angeles County Auditor-Controller.

“It is all about accountability,” he said.

In cases like Chiu’s, there is no information on state or federal websites about the complaint or inspectors’ findings. Consumers can see, however, that in 2011, while Chiu was living at the Arcadia nursing home, inspectors found some residents didn’t receive proper treatment to prevent new pressure sores or heal existing ones, according to federal documents.

But until a reporter called last week, the Arcadia Health Care Center website was highlighting its status as a five-star facility, the maximum possible rating on a U.S. official government database. Its actual rating is three stars. The claim has since been taken down.

In a written statement, he said that the judge’s ruling in the Chiu case was “unwarranted and not supported by the evidence.”

“We were and remain extremely disappointed by the ruling,” he said.

Chu had a number of underlying conditions, and the nursing home successfully managed them,  he  said, adding that the family “always expressed their satisfaction with the care.”

The arbitrator’s ruling cannot be appealed.

Statewide, delays in nursing home inspections have been a persistent problem. At a January hearing, legislators demanded more accountability and efficiency. A state Assembly bill would require investigations of mistreatment or abuse to be completed within 40 days.

The problem is particularly acute in Los Angeles County, which has a third of the state’s nursing homes. The county oversees nursing homes on behalf of the California Department of Public Health and the federal Centers for Medicare & Medicaid Services.

Last month, Kaiser Health News and the Los Angeles News Group reported that L.A. County officials had attempted to clear their backlog in part by instructing inspectors to close cases without fully investigating them.

Jonathan Fielding, who heads the county public health department, says all cases have been investigated but not all have been written up. Under questioning by Los Angeles County supervisors last month, Fielding said that the department does not have adequate funding or staffing to meet all federal and state requirements. The division has an annual budget of $26 million but needs $33.5 million, he said.

Supervisors ordered an audit, which was issued last week. It found a lack of central oversight over inspections, noting that the department did not set or track timelines for investigations. The department also didn’t properly manage its funding, leaving about $4 million in its budget unspent over the last two fiscal years, the audit reported.

These problems concern Molly Davies, coordinator of the WISE & Healthy Aging Long-Term Care Ombudsman Program for L.A. County, whose position is partially funded by the state and federal governments. She said she has recently come across seemingly egregious cases in which the investigations took too long.

Among the cases, as described in records:

*The county received a report in November 2009 alleging that a woman with diabetes and bipolar disorder had been sexually abused by a staff member at a Palos Verdes nursing home. An investigator visited the facility a few weeks later but didn’t issue a fine until October 2013.

*A Culver City nursing home reported in March 2011 that an 87-year-old woman died after being given a narcotic at a dose 10 times higher than prescribed. Three years later, a fine of $20,000 was issued.

*In 2010, the department investigated an allegation that a certified nursing assistant at a Torrance facility was videotaped abusing a partially paralyzed man with brain damage. The case was not completed until this year, when a $20,000 citation was issued.

‘DPH was not doing their job’

Chiu decided her mother would be best taken care of in a nursing home. She said the Arcadia Health Care Center had five stars and was around the corner. Sui Mee Chiu moved there in May 2009.

In late 2010, during a meeting with staff at the home, Chiu heard her mother had an infected bed sore, according to her September 2011 compliant. A few months later, the wound was so severe she had to be transferred to a hospital. Chiu then confronted the staff, who blamed her mother for being “non-compliant” and her father for interfering with the care during his visits, according to the arbitrator’s ruling.

Her father, now deceased, was then 89 and had a history of strokes. But he visited the facility twice daily, staying a total of about four hours.

“My parents have been married for almost 60 years and my father’s only concern is to make sure my mother is comfortable,” Chiu said in her complaint.

Chiu received a letter in October 2011 from the public health department acknowledging the complaint and saying an investigator had been assigned. In July 2012, after her mother had died, Chiu sent another letter and photos of the ulcers. She said she didn’t get any response until this week, after a reporter and she separately called the department.

According to the department’s recent statement, an inspector began the investigation in October 2011, within the 10 days required by law.  An inspector observed residents with similar medical conditions at the Arcadia Health Care Center, conducted interviews and reviewed records, the department said. Officials said they were not able to interview Sui Mee Chiu, who had been transferred by her daughter to a Monrovia facility after a hospital visit in April 2011.

No questions were raised about the care provided in Monrovia by Chiu or the arbitrator.

The  arbitrator, retired Superior Court Judge James Alfano, ruled in October 2013 that the nursing home was reckless in its care of Chiu, leading to the severe ulcer that contributed to her death. Her immune system was weakened by antibiotics for treatment of the pressure sore, he wrote. Among other things, he found that the older woman had not been turned properly, nor had she received proper wound care .

“The documentation presented in this case reflects a complete failure of the nursing staff to comply with their own guidelines,” he wrote.

Chiu said that she was glad the nursing home had to take responsibility for its actions. But she wishes the public health department would, as well.

“At the end of the day, you have a duty to do your job,” she said. “DPH was not doing their job.”

Waiting And Waiting On The Nursing Home Inspector