In-store medical clinics like those at Walmart – having established a beachhead with relatively healthy patients looking for convenient, low-cost care for simple problems – are eyeing a bigger prize, the millions of Americans with costly illnesses such as diabetes and heart disease. 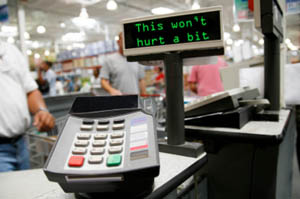 Just as Walmart and other retailers shook up the prescription drug business by offering $4 generic drugs, the industry now aims to apply its negotiating and marketing clout to tackle problems that vex consumers and the health sector: unpredictable costs, a lack of primary care doctors and inefficient management of chronic illnesses, whose costs drive the majority of health care spending.

“It’s sad that the existing health care establishment has not figured out a way to make primary care affordable and accessible,” says Jerry Avorn, a professor of medicine at Harvard.  “We should not be surprised if someone outside of our world comes in and does it for us.”

Last week, Walmart’s ambition to become the nation’s largest provider of primary health care services became known when a confidential document the giant retailer sent to some of its strategic partners leaked out. The request for information sought partners who could help Walmart in a variety of areas, including monitoring patients with diabetes, asthma, high blood pressure, heart disease, obesity and other conditions.

Walmart backed away from parts of its own document, saying it did not intend to build a “nationally integrated, low cost primary care platform.” Indeed, it is hard to imagine what a national platform would look like given the wide variation of state laws governing health care delivery.

But clearly, Walmart and other retailers are looking for ways to expand services at their in-store clinics.

Already, CVS Caremark, the largest operator of in-store clinics with nearly 550, and Walgreens have set up programs aimed at helping diabetics monitor and control their condition, which includes counseling chats with pharmacists. Weight loss programs and counseling are on tap at some retail clinics. Truck drivers can pull their 18-wheelers into the parking lots of more than 600 such in-store centers nationwide to get their mandatory federal health exams.

“There are real savings to containing the cost of the chronically ill in this country,” says Helena Foulkes of CVS/Caremark, which offers in-person and telephone conversations with pharmacists to diabetic patients enrolled in its “Pharmacy Advisor” program. Some employers also send workers to the firm’s MinuteClinics for blood tests and other health screenings. “More and more of clients are actively looking for wellness programs and they see retail clinics as one element.”

In part, the clinics see a pure business opportunity based on consumer convenience and cost savings, which they can market to the public, employers, insurers and hospitals. Costs are roughly 30 percent to 40 percent less than similar care at a doctor’s office and 80 percent cheaper than at an emergency room, according to a study in published this year in the American Journal of Managed Care.

That’s attractive to insurers. Use of retail clinics among patients with insurance rose tenfold from 2007 to 2009, the study found, with clinic visits representing about 7 percent of all medical visits for 11 common acute conditions: “If these trends continue, health plans will see a dramatic increase in retail clinic utilization … particularly among, young, healthy and higher income patients living close to retail clinics,” the study concluded.

Still, while less expensive than going to an emergency room or doctor’s office on a per-visit basis, “if more people seek care, that could increase health care spending,” says one of the co-authors of the study, RAND researcher and medical professor Ateev Mehrotra of the University of Pittsburgh School of Medicine.

The California Healthcare Foundation found the No. 1 thing consumers liked about the in-store clinics was predictability: the cost of the service was clear ahead of time.

“That contrasts with most people’s experience of health care, where if you walk into a doctor’s office or an urgent care clinic, you have no idea what the charge will be,” says Mark Smith, president and CEO of the foundation.

Interest in clinics is also spurred by the federal health law, which, among other things, will create incentives for small businesses to offer wellness programs for workers.

“An employer with 50 to 250 employees can’t afford to bring in a company to do corporate wellness,” but it could partner with a retail clinic and send employees there for blood tests, nutrition counseling or diabetes management, says Stewart Levy, president of Health Promotion Solutions in Newtown, Pa., a consulting firm that is working with the retail clinic industry.

The growth of retail clinics – both in sheer numbers and the scope of services they offer – is one of several avenues being pursued to revamp primary care, which is facing a shortage of physicians. The Association of American Medical Colleges estimates a shortfall of 21,000 primary care doctors by 2015.

Done right, supporters say, expanding services through retail clinics could provide better access for many patients and lower costs, and provide an outlet for an expected jump in demand for care in 2014, when millions more Americans get insurance through the federal health law.

But obstacles remain. Will retail clinics be able to translate their success with simple acute problems to a more long-range and intensive monitoring of complex conditions? Will employers and consumers embrace the idea? Will clinics become components of new, integrated collaborations between doctors, hospitals and insurers?

“Asthma and diabetes are not something you get one time and get fixed,” says health care consultant Ian Morrison, who follows trends in the industry. “How effective will they be in managing that over the long term?”

While studies have shown that retail clinics provide similar – or even better – quality care for simple conditions such as sore throats, researchers haven’t yet looked at their ability to do more complex monitoring of patients, often called disease management.  Data is mixed on the success of such programs and some have been shown not to save money. Recently, a study of eight disease management firms that used nurse-based call centers failed to save Medicare money.

Another challenge is the wide variety of laws governing medical centers. Some states, including New York and California, prevent clinics (or hospitals) from directly employing physicians, nurse practitioners or physician assistants. Other states cap the number of nurses each doctor can oversee. Efforts to expand nurses’ ability to practice autonomously are often fought by state medical associations.

“It’s interesting that I can go from Washington D.C., where I can be certified to take care of patients autonomously, to Georgia, where I can do very little because I have to have a supervisor who is a physician overseeing what I do,” says Ken Miller, an associate dean in the school of nursing at Catholic University and a past president of the American College of Nurse Practitioners.

While a few centers operated by retailers have doctors on site, the vast majority of staff are nurse practitioners or physician assistants. According to the Convenient Care Association, the industry’s trade group,there are more than 5,000 nurse practitioners working in the clinics, making up 95 percent of the clinicians.

If more patients with chronic illnesses can be seen in settings like retail clinics, where they can stop by on the way home from work or on the weekends, Miller and others say they may be more likely to take their medications, monitor their blood sugars and take other actions to prevent a worsening of their disease.

“If you have a stable diabetic, why should that person be going in to see a physician when a nurse practitioner can manage care of that patient?” he asks.

Primary care doctors fear retail clinics will skim off the healthiest patients, leaving them with more complex or older patients, with no corresponding increase in reimbursement from insurers or the government. They also worry that the expansion of retail clinics into caring for patients with chronic illnesses will further fragment the care such patients receive.

In a statement, the American Academy of Family Physicians says a better answer for such patients is “the development of a health care system based on strong, team-based … care.”

For their part, the clinic industry says it can be an ally for overworked doctors. In the future, clinics could use nurse practitioners and physician assistants to do triage, particularly on the least complex patients,  so doctors could “use their training and skill to focus on patients with long term needs,” says Caroline Ridgway, policy and communications director at the retail clinic industry’s trade group.

But unless payment incentives are changed to reward quality over volume – and laws changed so nurse practitioners and physician assistants can provide more direct care in all states, there will be an increasing burden on primary care doctors as more Americans become insured, she says.

The majority of retail clinics are in the South and Midwest, according to a 2010 RAND Study. They’re more likely to be in areas with lower overall poverty and only 12.5 percent were in medically underserved areas, the RAND report said, although 21 percent of the U.S. population lives in such areas.

“The research did not support the claim by some champions.. that these clinics are improving access to care for the medically underserved: retail clinics are more likely to be located in relatively affluent sections of large urban areas,” the report concluded.

Still, about 35 percent of clinic patients are either uninsured or have high deductible insurance plans that put them on the hook for hundreds, if not thousands, in out-of-pocket costs, says Tine Hansen-Turton,  executive director of the Convenient Care Association.

“We are seeing people who are vulnerable,” she says.

For much of their brief history, retail clinics have focused their services on a narrow menu, mainly treatments for acute conditions, such as strep throat or ear infections, vaccinations, and physical exams needed for summer camp or other programs.

But retail clinics are moving beyond just a simple menu of services in part because “it wasn’t a financially sustainable model to be restricted to those things,” says Smith at the California HealthCare Foundation.

Now, the medical community is seeing what other industries have experienced: an interloper gaining a foothold in a market niche, then expanding. “Think about Toyota, they didn’t start off by competing with Cadillac and BMW. They started with cheap little cars but got better and better over time,” Smith says.