“Personhood” has dominated the abortion debate in recent months, highlighted by the failure of a high-profile constitutional amendment in Mississippi. And while abortion rights advocates in several states continue to defend against  other bills that would define an embryo or fetus as a person, advocates in Washington state are taking the offensive. 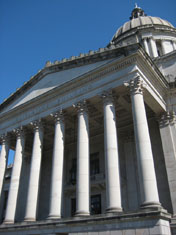 Democratic members of the state legislature introduced a bill earlier this month that would maintain or expand abortion coverage. The “Reproductive Parity Act,” set for its first hearings on Thursday, would require private and public insurers that provide maternity coverage to cover abortion services as well. If passed, the law would be the first of its kind in the nation.

“This is Washington’s way of saying [abortion services] are basic health care coverage,” said Sara Kiesler, a spokeswoman for Planned Parenthood Votes Northwest, which is part of the coalition pushing the bill.

Melanie Smith, a lobbyist with NARAL Pro-Choice Washington, said advocates are concerned less about personhood initiatives than about abortion restrictions stemming from the 2010 federal health law.

In 2014, states will be required under that law to open insurance exchanges — online marketplaces for individuals and small businesses to compare and purchase plans. These exchanges, however, have several restrictions, including a prohibition against using federal funds for abortions. Smith said those purchasing coverage will have to pay two separate premiums: one for abortion services — based on their actual cost, estimated by the insurer — and one for everything else under the plan. Federal subsidies can be applied only to the latter.

According to Smith, this presents a problem: Consumers might select against plans that offer abortion coverage, and if demand is low for the extra coverage, insurers could find it cost-prohibitive to continue offering coverage for abortion services.  All individual and small-group plans in the state currently cover abortion, said Stephanie Marquis, a spokeswoman for Washington’s insurance commissioner; information about larger, employer-based plans is unavailable. Smith added that all insurance carriers in the state offer at least one plan with abortion coverage. The bill, then, “is about maintaining access the way we have it now.”

In contrast, many states have used the health law’s implementation to restrict abortion rights, said Elizabeth Nash, state issues manager with the Guttmacher Institute. As of Jan. 1, 15 states had put in place restrictions on abortion coverage for plans that will be offered on exchanges; five of those states will allow coverage with a separate payment.

Advocates are “pretty confident” the Washington bill could become law and buck the trend, said Lisa Stone, executive director of Legal Voice, a nonprofit focused on women’s rights in the Northwest. Washington state voters have voted for abortion rights several times, Stone added, and she expects the state legislature will follow voter sentiment.

Those who oppose abortion rights, however, will likely put up a fight. Dan Kennedy, CEO of Human Life of Washington – an affiliate of the National Right to Life Committee – told the Seattle Times, “To mandate that we violate our conscience is tyranny. There’s no subtle or soft way to put the truth.”

Whether other states take up similar legislation will depend largely on changes in legislative makeup during the upcoming election, said Tait Sye, a spokesperson for the Planned Parenthood Federation of America. The national organization will be watching the Washington bill closely.

In New York,  state Assemblymember Deborah Glick has introduced a bill several times that would require abortion coverage, but it has made it out of committee only once. Glick reintroduced the bill this month, and while she was unaware of the effort in Washington, she said that the idea may now become more salient as states set up insurance exchanges.