Worried that too few young people are signing up for health insurance, Washington state officials are stepping up their efforts to get buy-in from the crucial demographic.

On Wednesday, they launched a campaign with Live Nation, a global concert promoter, in the hope that young adults will accept a dose of health-care education along with performances by their favorite artists.

The goal of the Live Nation partnership is to tell young adults, “there’s a new way to get insurance, and there are ways to address some of the cost concerns that they’ve had in the past,” Marchand said. 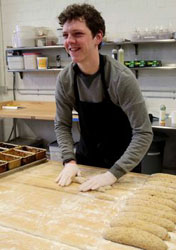 Kevin Wren, 29, a baker at Homegrown Bakery in Seattle, said signing up on the state exchange was “not that difficult” (Photo by Greg Gilbert/Seattle Times).

The campaign will include a contest through the exchange’s Facebook page to win tickets to the popular Sasquatch! Music Festival, educational booths at upcoming shows, including Justin Timberlake’s KeyArena concert, and information shared through email and social-media sites. Those efforts come on top of other outreach strategies taking place on college campuses and through doorbell ringing campaigns.

Nationwide, Affordable Care Act supporters say young adults are critical to the success of the health-care overhaul. Younger people are typically healthier and require less medical care, so their insurance premiums more than cover their medical needs. That leaves the unspent dollars from their premiums to subsidize the costs of treating older, sicker people.

In Washington, 18- to 34-year-olds make up roughly half of the uninsured population. But so far they represent only 20 percent of those enrolled in Washington Healthplanfinder, the state’s new insurance exchange. Nationally, 24 percent of enrollees are young adults, according to data released this week.

Obamacare supporters have until the end of March, when open enrollment ends, to boost the number of “young invincibles” — so called because they perceive themselves as invulnerable to injury and disease.

“The main reason they’re not insured is they’ve thought it’s something they can’t afford,” said Michael Marchand, spokesman for the Washington exchange. Most insurance sold on the exchange is subsidized through federal tax breaks, based on a person’s income level.

Many experts warn that if too few young people sign up — the goal nationally is for 40 percent of enrollees to be 18- to-34-years-old — that health-care costs could climb, leading to higher premiums for everyone and threatening the success of the state marketplace.

But getting 18- to 34-year-olds signed up might be trickier than expected, and some researchers wonder if more attention needs to be paid to enrolling healthy people of all ages to keep down insurance costs.

At 29, Seattle’s Kevin Wren is one of the young adults already on board.

In October, Wren lost his health benefits when he was laid off from a public-relations job. Now he’s a baker at a cafe called Homegrown, but the job didn’t come with insurance. Wren knew about the Affordable Care Act and checked out the state’s website.

“There is a lot of confusion out there, but if people are willing to sign up, it’s not that difficult,” he said. Based on his income, Wren qualified for a subsidy and is now enrolled in a plan with Group Health Cooperative that costs him $86 a month.

While Wren is young, he’s also proof that no one is invincible. About 15 years ago he was diagnosed with Type I diabetes, which his dad also has. Wren needs multiple doses of insulin to stabilize his blood-sugar levels each day, at a cost of $600 a month.

Wren recounts a time after graduating from college when he was unemployed and without benefits. He ran low of insulin and had to tap his dad’s supply, rationing the doses as best he could. After signing up for insurance, Wren persuaded a work colleague to do the same.

“A lot of young people don’t have chronic conditions,” he said. “If they’re well, they’re kind of fair weather that way.”

National surveys have tried to determine young people’s attitudes about insurance. Approximately three-quarters of Americans age 18 to 30 say health insurance is something they need. And about two-thirds worry about paying medical bills, according to a June 2013 survey by Kaiser Family Foundation.

This fall, University of Washington graduate students interviewed a dozen young adults about their health-care opinions. Many recalled going to the doctor or hospital and being hit with large, unexpected bills afterward. They doubted that private insurance companies were offering affordable, desirable plans. Many wished for a single-payer system.

“They have a lot of emotional and very rational reasons for feeling skeptical about insurance and the worth of it,” said Louisa Edgerly, an adjunct professor with the University of Washington’s Department of Communications. “That makes for a more complicated conversation around these decisions about whether to purchase or not purchase a plan.”

From the interviews, the students produced short videos that soon will be posted on university websites and used to lead discussions at coffee shops, libraries and other venues. The videos don’t cheerlead the Affordable Care Act, Edgerly said, but offer an authentic message about health-care concerns while still ultimately encouraging young people to enroll.

Some doubt the focus

Recently, some experts have challenged the focus on young adults and the idea that Obamacare costs will spiral out of control if fewer sign up than hoped for.

That’s in part because insurance premiums vary widely according to age. The same plan that costs a 20-year-old $150 will cost a 50-year-old $425. That means a healthy, middle-aged person could be more economically beneficial to the program than a less-well young person.

In part because of this age-based disparity in premiums, an analysis released last month by researchers with Kaiser concluded: “Enrollment of young adults is important, but not as important as conventional wisdom suggests.”

Marchand, of the state’s insurance exchange, is not giving up on young adults.

“It’s still going to be mission critical that we get this population captured for enrollment targets that we have as a state,” he said. The goal is to sign up 280,000 people in the exchange by the end of the year.

So far, more than 73,000 have enrolled and paid for coverage.

Washington State Goes After The Young And Uninsured