At the headquarters of Public Health — Seattle & King County in downtown Seattle, those leading the county’s effort to get people to sign up for insurance under the new federal health-care law are conspiring around a table. 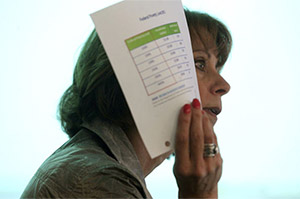 Maybe they could get singer Dave Matthews to urge everyone to get covered, one suggests. Macklemore, sighs a young woman, intoning in a hushed, reverent voice the name of the rising star of Seattle rap and social justice.

For the growing campaign to enroll the uninsured in health insurance as part of the monumental health-care overhaul, signing up healthy young adults — the “young invincibles” — is crucial to success.

But so far, all the brainstorming, like the rest of a flurry of activity around the state, has been largely invisible as the clock ticks toward Oct. 1.

That’s when most uninsured people in Washington will be able to sign up for insurance under the Affordable Care Act (ACA), aka “ObamaCare,” no matter what their health status or pre-existing conditions. And nearly three-quarters of them will qualify for free or subsidized insurance, according to state estimates.

With an influx of federal money — $150 million in grants — and the help of a network of groups and community organizations in every county, a new agency, the Washington Health Benefit Exchange in Olympia, is building the advertising, training and technological infrastructure to support a massive sign-up effort.

Under the law, most individuals, except those specifically exempt, must have health insurance by March 31, 2014, or pay a penalty on their income tax. A similar requirement for businesses to provide employee coverage has been delayed for a year.

About 80 percent of adults in Washington are now insured through private or government programs, including employer-sponsored plans, Medicare and Medicaid, military and veterans’ programs and individual plans, according to the state’s Office of the Insurance Commissioner.

For most people, there will be few new changes. Many elements of the federal law, such as free preventive care and guaranteed coverage for children with pre-existing conditions, have already gone into effect.

But about 20 percent of adult state residents under age 65 — about 1 million people — are uninsured . (If the state’s entire population is considered, the uninsured make up about 16 percent of the total).

In King County, nearly 300,000 adults have no health insurance, according to the insurance office’s calculations.

U.S. citizens with very low incomes will be able to qualify for Medicaid, the state-federal insurance program. Eligibility has been substantially broadened, and state officials estimate an additional 250,000 adults will qualify .

For those with higher incomes, including legal immigrants here for five years or more, there will be sliding-scale subsidies to help pay private insurance premiums.

The penalty for going bare is $95 per adult or 1 percent of family income, whichever is greater.

The other penalty is being uninsured in the face of a serious, costly health problem.

Progress in the state

Washington state is ahead of many states in setting up key provisions of the ACA: an online insurance-change marketplace and instant-enrollment tool known here as the Washington healthplanfinder (motto: “Click. Compare. Covered.”).

Political leaders in the state made leaps of faith early on, even hiring some key people before the U.S. Supreme Court blessed the act last year.

“We are going to lead the nation in getting our exchange up and running,” Gov. Jay Inslee vowed at a recent meeting.

Despite all this effort, questions continue to dog the organizers.

What if we build a system and they don’t come?

Are subsidies enough to get people to sign up — in particular, those healthy young adults, whose participation and premiums are necessary for a financially healthy marketplace?

What if people simply skip the insurance and pay the penalty?

On the other hand, if lots of people sign up, will they be able to find doctors?

And what happens to those who are left out?

For now, organizers in Washington haven’t made much noise about the Oct. 1 enrollment opening.

Other states have jumped out with advertising, including online videos in Oregon that feature folk singers. Other states’ ads use Super Bowl “competition” themes and cartoons.

Everyone agrees the new law needs some fanfare. Only 62 percent of Americans know that individuals can get subsidies to help pay premiums, and two-thirds of those uninsured say they don’t understand how the federal law might affect them, according to a Kaiser Family Foundation poll in March. (KHN is an editorially independent program of the foundation.)

The state’s exchange — which holds the advertising purse strings — is holding off until Sept. 3, when a hotline will go live.

In the meantime, Public Health — Seattle & King County, like other lead agencies in counties across the state, is working with a wider network of community groups and agencies to get the word out.

All around the state, these groups are making plans for “outreach events” at festivals, in libraries, farmers markets, community-college campuses, community centers and more.

They’ll visit with people in food-bank lines, piggyback on state programs for the unemployed and arrange sit-downs with immigrant communities.

And, of course, they will try to reach those key young people at ballgames and rock concerts and through messages from their heroes and confidantes. Oh, and their mothers, who were voted most trusted by that age group in focus-group polls.

On Oct. 1, the shiny new part of this new system will go live: the healthplanfinder, an online tool to help the uninsured “shopper” compare health plans and enroll in either private insurance or Medicaid.

Four “metal levels” of plans from different insurance companies — ranging from the minimum “bronze” level to “platinum” — require individuals to pay from 40 percent to 10 percent of costs. But all plans must cover 10 “essential health benefits.”

Behind the screen, 60 percent of that $150 million grant the state received has gone toward setting up the complex interfaces needed to hook up the state system with federal agencies, including Homeland Security and the Internal Revenue Service.

The goal is that once a person fills out the application to be insured — a process that might take up to an hour — the healthplanfinder will spit out answers within seconds.

Private insurance brokers will continue to help people find insurance, but community agencies may be more likely to reach those who might qualify for assistance.

If past experience is any guide, not everyone who qualifies for subsidies — even for free insurance — will sign up.

Even explaining the concept of insurance can be difficult, especially for people who haven’t had any in the past, or who come from countries where the concept is foreign. What’s this cost-sharing thing? Deductible? Premium?

Then there’s getting those healthy young people to sign up. What happens if they don’t? By law, the program must be financially self-sustaining by Jan. 1, 2015.

A recent analysis in Health Affairs estimated that the federal law will leave about 503,000 Washington residents without insurance. “It will do little to alter racial disparities in coverage,” wrote the authors.

That’s one side of the coin.

The other: What if everyone signs up and wants care right now?

Adding hundreds of thousands of adults to the ranks of the insured, even over years, means the term “doctor shortage” enters the conversation.

“There already are significant shortages of primary-care providers in rural areas in Washington state, and it’s going to be get a lot worse,” says Dr. Roger Rosenblatt, vice chair of the Department of Family Medicine at the University of Washington and associate director of the UW’s Rural/Underserved Opportunities Program.

As part of the federal law, family-practice doctors and pediatricians will now receive Medicare rates for seeing Medicaid patients, which the state hopes will help open some doors.

But Rudy Vasquez, director of managed-care operations at Sea Mar Community Health Centers in Seattle, cautions: “Coverage alone is not going to cut it.”

Access to specialty care, Vasquez and others warn, will continue to be a problem for Medicaid patients.

Even so, the prospect of movement on health insurance has mobilized and encouraged many, advocates say.

“I have never seen communities come together so quickly,” Vasquez says.

Maybe, just maybe, the county public-health organizers hope, it will include Macklemore. “Do you know him?” someone asks.