The chairman of the House Ways and Means Committee made clear Tuesday that finding a solution to the vexing issue of setting Medicare physician payment rates is on his to-do list this year, and he got some tepid support from a key Democrat. 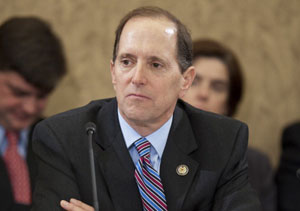 Rep. Dave Camp, R-Mich., said that the effort could be helped by a recent reassessment of how much it would cost. Earlier this month, the Congressional Budget Office lowered its cost estimate for fixing Medicare’s physician payment formula over the next decade to $138 billion due to lower Medicare spending on physician services during the past three years. In January 2012, the CBO estimated the cost of the fix at $316 billion, which it reduced to $245 billion last August.

“Cutting scores in half is certainly helpful,” the committee chairman told reporters Tuesday, adding later, “that’s still a very large number.” It may be even harder to find funding amid the ongoing fight over “sequestration,” a package of automatic spending cuts set to kick in March 1. President Barack Obama and lawmakers are also battling over how to fund the government after the current continuing resolution expires on March 27.

Camp did not say where he would find the money to pay for the SGR overhaul, but he has promised it “will not add a dime to the deficit.” He said he is working on the proposal with a fellow Michigan Republican — House Energy and Commerce Committee Chairman Fred Upton.  It might be part of a larger piece of legislation or it might move on its own.

“It’s hard to know right now,” he said. “I wouldn’t close off any avenue on that.”  Camp said the SGR legislation is part of a broader committee agenda to examine safety net programs. The yearly “doc fix” dilemma stems from a 1997 deficit reduction law that called for setting Medicare physician payment rates through a formula known as the “sustainable growth rate” (SGR), based on economic growth. For the first few years, Medicare expenditures did not exceed the target and doctors received modest pay increases.

But in 2002, doctors reacted with fury when they came in for a 4.8 percent pay cut. Every year since, Congress has staved off scheduled cuts. But each deferral just increased the size – and price tag – of the fix needed the next time.

Camp and Upton, along with their panels’ respective health subcommittee chairs, have unveiled an SGR repeal plan that would freeze physician payment rates at their current levels for the next 10 years, with future increases based on individual physicians’ quality of care and efficiency.

Camp said Tuesday he has not discussed the draft with either the White House or the Centers for Medicare and Medicaid Services.

Rep. Jim McDermott of Washington, the ranking Democrat on the Ways and Means health subcommittee, said the GOP outline “leaves plenty of room for agreement if people want to find it.” But he warned that making beneficiaries finance the fix wouldn’t fly.

“If done smartly, this issue could reshape our entire health economy for the better, but costs just can’t be hoisted onto the backs of beneficiaries,” he said. “There are better options, with strong policy justifications, to pay for the needed SGR policy changes.”

Bipartisan groups of lawmakers have proposed fixing the SGR formula in the past, but have been unable to agree on how to pay for it.