Back home in Bloomfield Hills, Michigan, Richard and Denise Victor would get to see their four grandchildren almost every day. One set of kids lives around the block; the others are half an hour away, all close enough for frequent visits and sleepovers.

“With the younger ones, we have a routine of stories when they spend the night,” Richard Victor said.

But when the coronavirus hit, the couple were at their vacation home in Florida and, suddenly, it wasn’t safe to leave. They’ve been sheltering there for three months, missing the grandkids, struggling with an absence that FaceTime just can’t fill.

“It’s very, very difficult,” said Victor, a 70-year-old lawyer and founder of the nonprofit Grandparents Rights Organization. “You have to try your best because we don’t know when this will be over with.”

Of all the hardships imposed by the coronavirus pandemic, few are as poignant as the reshaping of relationships between children and the grandparents who love them.

Across America, where more than 70 million people are grandparents, efforts to prevent infection in older people, who are most at risk of serious COVID-19 illness, have meant self-imposed exile for many. At the opposite extreme, some grandparents have taken over daily child care duties to help adult children with no choice but to work.

Both situations are the result of the fast-moving pandemic, which forced families to decide quickly whether to isolate with grandparents “inside the bubble or out,” Harrington Meyer said. Three months later, many are still grappling with those decisions — and worrying about an uncertain future.

“I think we all have the exact same set of issues,” said Harrington Meyer, author of the 2014 book “Grandmothers at Work: Juggling Families and Jobs.” “What will August bring? All of us need to be prepared for this to be fluctuating.”

For grandparents separated from their grandchildren, the risks posed by gathering in person haven’t changed, said Dr. Krutika Kuppalli, an affiliated clinical assistant professor of medicine in the infectious diseases division at Stanford University. Rates of serious illness and death caused by COVID-19 remain much higher in older people than the young, and children can easily spread the disease.

“It’s hard to know if a child has been exposed or whether they have asymptomatic infection,” Kuppalli said. “I would definitely recommend staying away or definitely continuing to wear masks and perform good hand hygiene.”

At the same time, maintaining a connection with grandkids is important for the well-being of everyone, said Dr. Preeti Malani, chief health officer and professor of medicine at the University of Michigan in Ann Arbor.

In Highland Beach, Florida, Victor said he and wife Denise, who’s in her 60s, have relied heavily on Zoom, FaceTime and videos to stay connected to their grandchildren. Still, it’s been difficult. Since February, the two older boys, ages 10 and 13, have gotten taller and better at basketball. The baby has gone from crawling to walking. And their precocious 4-year-old grandson has paid close attention to the passing time. 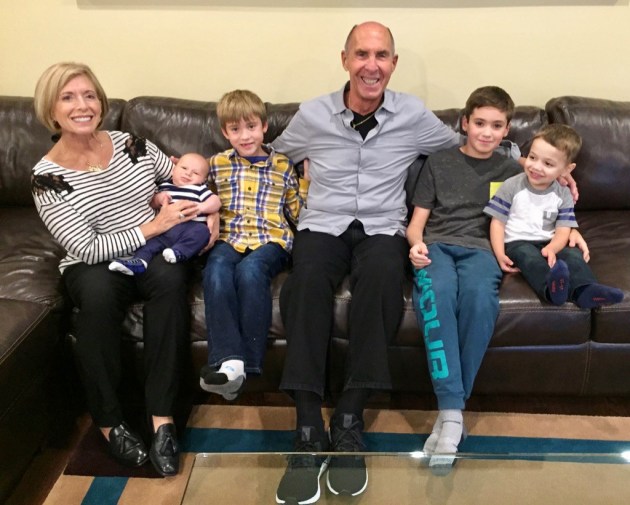 Richard and Denise Victor of Bloomfield Hills, Michigan, haven’t seen their grandkids since February. In happier times — before the coronavirus pandemic — they had regular visits with grandsons (from left) Daren Cosola, Stirling Victor, Davis Victor and Lucas Cosola.(Courtesy of the Victor family)

Some grandparents have calculated that the need to care for their families outweighs the fear of infection. Fran Layton, 73, a lawyer who lives in Berkeley, California, rushed to pick up her 2-year-old grandson in San Francisco in late March when his newborn sister arrived earlier than planned.

“My son called and said, ‘Mom, they’re going to induce. Can you get here?’ I did not hesitate,” Layton recalled.

She kept the toddler for a couple of days at that time. A month later, she started caring for him at her home a few days each week so his parents could juggle work and the new baby.

“He would take his naps in a stroller in the afternoon,” Layton said. “I walked the Berkeley Hills while he napped. It got me my exercise.”

Recently, Layton’s son and daughter-in-law decided to return to using their son’s nanny. Layton agreed with that decision, but also knew that widened the circle of infection risk. For now, she is choosing to stay away and doesn’t know when she’ll be together again with her grandson — or her new granddaughter.

“I was a mess when he left,” she said. “It’s sadness that we all feel forced apart with children and grandchildren.”

Some grandparents continue to see their grandchildren in person, finding ways to stay apart while still being together. “The outdoors is safer than the indoors, in general,” said Malani, the University of Michigan professor. “To me, a walk in a park, without a play structure, without other kids around, is OK.”

About 4% of grandparents live with their grandchildren, so staying away isn’t an option.

As of mid-May, Beth Kashner has joined that group. Her daughter’s family, including an 11-year-old granddaughter and 10-year-old grandson, relocated from Brooklyn to Kashner’s large Seattle home “while normal life is on hold,” or at least for the summer.

“They even brought their two cats,” said Kashner, 73. “I’m really happy that everyone will be part of the same safe community.”

Kashner already lived less than a mile from her four other grandchildren, who range in age from 3 to 10. For weeks, she saw them only from afar. Now, the whole family is gathering. It may be risky, but they’re taking pains to stay as safe as possible, she said.

“We did just go to the park wearing masks and trying to keep our distance,” she said.

For those who must be physically close to their grandchildren, there are ways to reduce the risk. Frequent hand-washing and sanitizing of high-touch surfaces is essential. Avoid contact with those outside the household. Masks and gloves can help.

And it’s not just the little ones. Adult grandchildren must consider carefully how to visit their grandparents, too. Malani recently took her family to visit her 97-year-old grandmother, Haridevi Malani, at home.

Until a treatment or vaccine for the coronavirus is available, every interaction will be fraught with questions, she said. Going forward, families will need to weigh risks and benefits.

“We’re not going to have a situation where we can mitigate the risk to nothing,” Malani said. “It’s about how much risk you’re willing to take.”