Even though his Water’s End Brewery taproom in this Washington, D.C., suburb had been forced to close, he enlisted the help of nearby Beltway Brewing to make a new ale, PPE beer. They’ve donated the more than $18,000 from its sales to the hospital system to help buy masks, gloves and other personal protective equipment.

Inova, which serves some of Washington’s wealthiest suburbs, told bondholders last year that it had $3.1 billion in investments it could liquidate in three days. It has received more than $144 million in advanced Medicare payments and $49 million in other federal coronavirus assistance.

As of early June, Inova has raised $4.3 million from more than 3,300 donors by appealing for donations to its Emergency Preparedness Fund.

“The optics of this aren’t great,” said Niall Brennan, president of the nonprofit Health Care Cost Institute, a research and policy organization, when asked about the fundraising effort at Inova. “This is one of the wealthier hospital systems in the area, and they should not be appealing for charitable donations for PPE.”

Inova is one of several large hospital systems raising money to offset the cost of their vital role in combating the COVID pandemic. Yale New Haven Health, the largest hospital system in Connecticut, and UCLA Health in California are also soliciting donations to pay for PPE and other needs.

The pandemic upended hospitals’ usual financing equations — forcing them to cancel lucrative nonemergency procedures and redirect much of their energy to treating a new disease that can keep patients in the hospital for weeks. But it has also engendered new fundraising efforts as it has raised hospitals’ visibility.

“Some of this is tapping into the large reservoir of goodwill that the hospital has amassed because of their efforts over the course of the pandemic,” Brennan said, “and many people want to help and are not sure how, beyond staying at home.”

The efforts come even though the federal government has rushed out billions of dollars in relief funding to hospitals around the country, which hospitals say is not enough to defray their losses from the coronavirus outbreak.

The relief “will not fully cover our COVID-related losses, estimated at more than $200 million,” UCLA Health, which received nearly $55 million in federal coronavirus grants and $276.5 million in advanced Medicare payments, said in a statement. “On the long road to recovery, we will continue to accept the generosity of those who support our mission.”

Inova’s top fundraising official, Sage Bolte, said the federal funding did not come close to meeting Inova’s needs. The hospital system’s revenue is down more than $100 million from last year, she said, and the system spent tens of millions of dollars helping it gear up to handle COVID-19 patients. Inova laid off 427 employees in nonclinical positions, a spokesperson said.

Inova made a $1 billion profit in 2019, with the gain coming mostly from investments, according to its audited financial statement.

Still, the fundraising does raise concerns among some experts.

“They are taking advantage of their goodwill here,” he added.

Simone Singh, assistant professor of health management and policy at the University of Michigan, also questioned the need for PPE fundraising. “A health system like Inova that is doing so well financially certainly should have the resources to purchase necessary PPE for their employees without having to rely on community fundraisers,” she said.

Water’s End and Beltway Brewing are donating $6 of the $18 cost for six-packs of the PPE beer, a bitter West Coast-style India pale ale. The label shows “PPE” stands for “People Performing under Extreme conditions.”

The first batch of PPE was so successful it sold out on the first weekend in April. When they sell out the second batch of beer, made in late May, Mote said, the total donations to Inova should be about $27,000.

Mote said that, when he reached out to Inova, he did wonder how giving thousands of dollars to a multibillion-dollar company would make a difference. 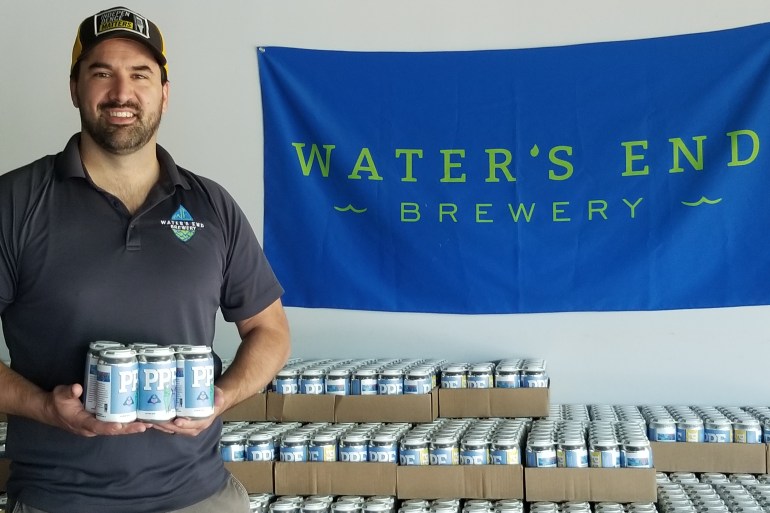 Zach Mote, president of Water's End Brewery in Woodbridge, Virginia, holds a six-pack of PPE. Sales of the pale ale raise money for Inova Health System. Mote, a former police officer, wanted to help those on the front lines of the COVID-19 pandemic. (Phil Galewitz for KHN) 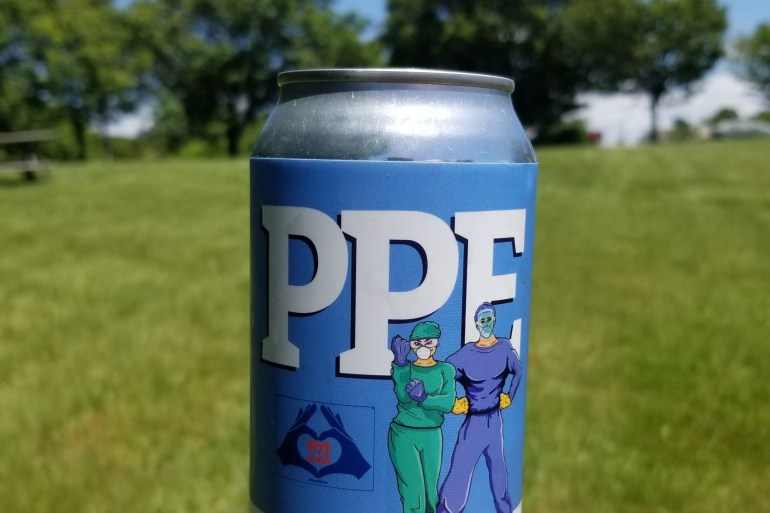 Water’s End Brewery and Beltway Brewing donate $6 of the $18 price of a six-pack of PPE beer, a West Coast-style IPA. “PPE” stands for “People Performing under Extreme conditions.” (Phil Galewitz for KHN)

When Bolte showed up in April to watch the PPE beer being canned, Mote told her: “This is probably just a drop in the bucket for you.”

But Mote said she explained how the price of masks, gloves and other PPE had risen dramatically and how supplies were tough to get in April. Since then, he’s been reassured he made the right move. “I got the impression that these donations have made an impact,” he said.

“A lot of people don’t realize that while the number of COVID cases are improving, a lot of people are going to work and putting themselves at risk,” Sten Sellier, Beltway’s president, said about his reasons for helping to make PPE. “That’s something we wanted to bring attention to.”

“This was a way to recognize and give attention to people who do the hard jobs and handle the risks,” said Mote, who employs 10 people. The brewery has survived by converting its taproom into a packaging line and selling PPE and its other beers in a drive-thru set up in its parking lot.

Inova’s Bolte said the hospital is grateful for all the businesses and individuals who donated to the emergency fund. Local defense contractors General Dynamic and Northrop Grumman have made six-figure donations, she said.

“The donations have truly made a difference in our supply of PPE to help us go on,” Bolte said.

In May, Inova began resuming elective procedures that were put on hold in March, she said. The hospital system, she added, has enough PPE for staffers now but is gearing up for another surge in COVID cases this fall.