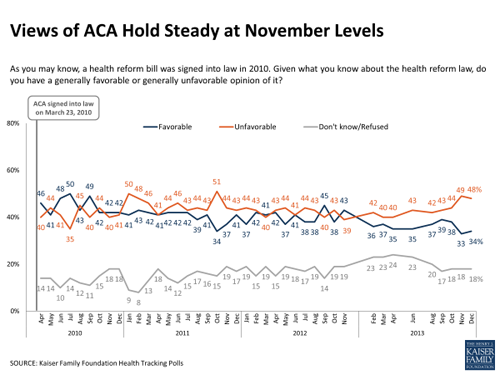 Improvements in the government’s insurance Web portal have not translated into stronger public support for the health law, a new poll shows.

Nearly half of the public views the law unfavorably this month, while only a third likes it. That’s about the same as in November, when public opinion plummeted after the technologically troubled start of the health care marketplaces, according to the poll from the Kaiser Family Foundation. (KHN is an editorially independent program of the foundation.)

Democrats have come around somewhat on the law, with 68 percent now supporting it—a jump from last month when 55 percent favored it. But support among independents dropped by 5 percentage points to 28 percent, with backing fromDemocratic-leaning independents remaining evenly divided. Only 7 percent of Republicans like the law.

The static results come even as half of the public believes the government has made progress in fixing the healthcare.gov website. More than  41 percent believes there’s been little or no improvement.

“Even though the public perceives some progress in fixing the website, they’re still giving the federal government poor ratings for implementation,” said Liz Hamel, one of the pollsters.

Concern about cost was the most common explanation people gave for not liking the law, with about a quarter of respondents who oppose the law citing it. Continued resistance to the law’s requirement that everyone hold insurance was mentioned by nearly one in five people in this group. Thirteen percent of them raised concerns that government had intruded too much into health care. The pollsters noted that two topics that have been the focus of much of news coverage—employers dropping coverage and a sense the government hasn’t delivered on its promises—were only mentioned by 6 percent of people.

The public continues to blame the law more for bad things than credit it for good ones. Six out of 10 people say the law has caused “many people” to lose their health insurance, and 57 percent have said it increased the budget deficit. (The official estimates from the Congressional Budget Office predict the law actually reduces the deficit.) On the positive side, 48 percent credit the law for allowing young adults under 26 to secure insurance coverage, and 45 percent say it has reduced the number of people without insurance. Nearly half of those polled said they don’t expect the law to affect them one way or the other, an increase from last month’s poll.

Website Repairs Have Not Bolstered Support For The Health Law, Poll Finds