When Michelle Kuecker was looking to shed some weight two years ago, she turned to a website her friend had suggested: MyFitnessPal.

The 26-year-old counselor started logging in her diet and exercise on a personal online account. She also shared the daily ups-and-downs with her sister and roommate, who were using the site. Six months later Kuecker reached her goal of losing 25 pounds. 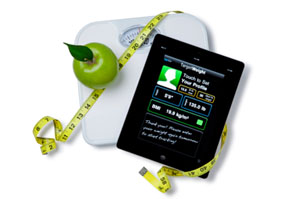 Consumers like Kuecker aren’t the only ones noticing the benefits of programs like MyFitnessPal, which also functions as a smartphone app. Last month, the insurance company Cigna announced it will offer services from MyFitnessPal,which has reported more than 40 million users, to the insurer’s customers.

“The goal here is to break down artificial barriers between most people and their insurance companies,” said Joe Mondy, director of public relations at Cigna, about the partnership.

And while they tout the overall benefits of a healthy body and mind, both insurers and employers could also benefit financially: Healthier consumers can mean lower health costs and more productivity at work.

Companies and insurers have taken different approaches to building their wellness programs. But most contain some common elements: a social networking component, health trackers and some sort of incentive. Incentives can be virtual, such as points and prizes that give users little more than bragging rights; or very concrete, like discounts on insurance premiums.

Cigna’s use of MyFitnessPal is part of a trend. A Blue Cross Blue Shield of Florida subsidiary is working out a deal to offer its beneficiaries Zensey, an online system that uses competition to engage people. Aetna, another large insurer, tapped Get Active!, an online program created by wellness company Shape Up that includes exercise and diet trackers, and competition with other users. Employers that offer Aetna can choose to add these wellness components to their workers’ plans, along with products like iTriage, a mobile app that lets users research symptoms and find doctors.

United Healthcare approached has worked with health technology company Novu to provide an interactive platform just for its Medicare beneficiaries. The online portal offers health evaluations and “LifeScores” to engage its consumers.

For the wellness companies, partnerships can help market their product and add new features.

Marybeth Thomson, head of business development at MyFitnessPal, said she could not disclose the business relationship with Cigna, but that it was equally beneficial to both sides of the arrangement.

“We share the same goal of helping people live healthier lifestyle,” she said.

For consumers like Kuecker, the websites and apps, regardless of how they are introduced, often open the door to a new level of awareness.

Kuecker said she had never counted calories until she started using MyFitnessPal. That successful effort, made her willing to try new wellness incentives offered by her employer’s health insurance plan.

“This is something doctors should recommend – it’s something that shows people how to achieve their goal, not just make a goal,” she said. “I think it’s great.”