The Ebola epidemic in Africa and fears of it spreading in the U.S. have turned the nation’s attention to the federal government’s front-line public health agency: The Centers for Disease Control and Prevention (CDC). But as with Ebola itself, there is much confusion about the role of the CDC and what it can and cannot do to prevent and contain the spread of disease.  The agency has broad authority under federal law, but defers to or partners with state and local health agencies in most cases.

Formally renamed the Centers for Disease Control and Prevention in 1992 to reflect its broader scope (previously it was just the Centers for Disease Control), the Atlanta-based CDC is an agency of the U.S. Department of Health and Human Services. Its mission is to promote health and prevent disease, injury and premature death. CDC’s most recent budget is just under $7 billion.

Q: What is CDC’S role in combating Ebola?

CDC personnel have been working on the ground in West Africa to try to stop the spread of Ebola since the spring, when cases began to mount. CDC Director Thomas Frieden told a congressional hearing Thursday that the agency currently has 139 staffers in West Africa, and that more than 1,000 workers have “provided logistics, staffing, communication, analytics, management and other support functions.”

In the U.S., the CDC is responsible for the procedures toscreen travelers from affected countries. CDC has also developed information for hospitals to help them prepare to treat Ebola patients, guidelines for health care workers to protect themselves while caring for those infected, as well as for those handling the bodies of patientswho have succumbed.

Mostly, however, CDC works with state and local agencies, as well as other federal agencies to ensure that the disease does not spread. CDC personnel, for example, work with agents from the U.S. Customs and Border Protection at ports of entry like airports. And the agency provides on-the-ground assistance, as well as funding in some cases, to state and local public health personnel. 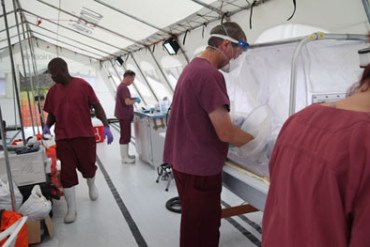 CDC recently announced it would send “rapid response teams” to any hospital with a confirmed Ebola case within hours. That policy change came after a nurse who cared for Ebola patient Thomas Eric Duncan at Texas Health Presbyterian Hospital was diagnosed with Ebola. The CDC has since become more assertive about sending personnel to hospitals, rather than waiting to be asked for help.

“This is a whole-of-government response, with agencies across the United States government committing human and financial resources,” Frieden testified. “We know Ebola can be stopped with rapid diagnosis, appropriate triage, and meticulous infection-control practices in American hospitals. And the United States is leading the international effort to stop it at the source in Africa.”

Q: What kind of quarantine authority does the CDC have?

Most quarantine laws are state and local. However, the CDC does have the authority and responsibility to isolate/and or quarantine individuals to prevent diseases from entering the United States, or from being spread between states. Ebola is one of the diseases specifically mentioned in an Executive Order allowing federal isolation and quarantine.

As a practical matter, however, federal quarantine is rare. The CDC says it was last used widely in the 1919 Spanish Flu epidemic, which predates the agency.

Most of the time, the CDC is invited in by state or local public health agencies for advice, guidance and expertise. State and/or local police are responsible for enforcing quarantine orders.

Q: Some history: What was CDC’s original mission?

It was originally created in 1946, as the Communicable Disease Center in the Office of Malaria Control in War Areas. Malaria was still common in the American South after World War II and much of CDC’s original work was aimed at its prevention and eradication, along with typhus and other communicable diseases.

In 1951, the CDC established the Epidemic Intelligence Service, which is the most famous part of the agency. It draws young physicians and other health professionals from around the world to investigate, track and work to contain disease outbreaks.

Q: What else does CDC do now?

In addition to tracking and working to prevent disease outbreaks, the CDC operates the national immunization program, Vaccines for Children, administers the $75 millionPreventive Health and Health Services Block Grant, which provides funding for health promotion programs, and oversees much of the federal government’s biodefense efforts. It also manages the Strategic National Stockpile, a supply of emergency medicine and medical supplies to be used in cases of natural or man-made disasters. And CDC operates a broad array of programs aimed at controlling non-communicable diseases, including birth defects, injuries, and environmental health risks.

What CDC Can Do To Fight Ebola