IBM’s Watson frequently had the right answer when the supercomputer competed on Jeopardy last year. Now, the nation’s second largest health insurer is hoping it will have the right diagnosis and treatment for patients. 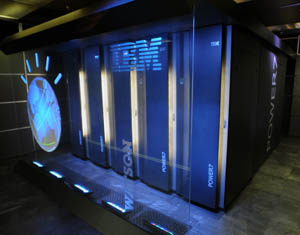 Representatives from IBM and Wellpoint discussed their developing partnership at a Friday Capitol Hill event. The tech company aims to make Watson useful to the health care industry, and Wellpoint believes it can help doctors practice evidence-based medicine.

The actual how-to part is still being worked out, but Watson could, for example, provide a list of likely diagnoses, or a list of potential treatments, when given a list of symptoms. Physicians and patients would remain in charge of any decisions, but Watson does have “the potential to transform health care delivery,” said Elizabeth Bingham, WellPoint’s vice president of health IT strategy.

Medical evidence doubles every five years, and “it’s not humanly possible for doctors to keep up with all of that” information, she added. Watson can quickly scan the latest medical literature and keep physicians current. In theory, the supercomputer would funnel data from its various sources and, among other services, provide physicians with a list of treatments ranked by effectiveness. It could also access individual patient health records to personalize recommendations, Bingham said. And, it could “help steer physicians toward tests that are worth doing, and toward treatments that are likely to be successful,” said David Kerr, an IBM corporate strategist. While Watson would not consider or rank treatments by cost, it could give doctors and patients the relevant price information.

Meanwhile, on a population basis, Watson could integrate this information into public health databases to help identify pockets of illness. Down the road, Watson could even become a tool for comparative effectiveness research, said Kerr.

WellPoint hopes that Watson will improve the quality and efficiency of care, as well as reduce the variability seen across providers. But don’t expect to see Watson in the physician’s office very soon. The insurer currently hopes to incorporate the system into oncology practices at the end of this year, while other physician specialties could be involved in a separate, small pilot by the end of next year.

Watson already has a place, however, in WellPoint’s administration. Staff members are using the system to consider authorization requests made by doctors, and as Bingham described, that usually “requires a lot of manpower, a lot of work” – but it has been made much easier by Watson.

What Is The Future Of Health Care? Watson Has An Answer