Wylie Lopez said he often has to prove himself.

If classmates suggest that he got an internship placement because he’s Hispanic, the to-be second year medical school student said he has no problem showing them his grades, or MCAT scores.

“It’s a fair argument,” said Lopez, who grew up in a rough, working-class neighborhood. “If you want people to respect you in the field, you do well regardless of how you got there.” 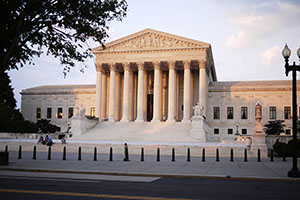 In the competitive world of medical school admissions, the intention of creating a diverse student body can  include attention to racial background. But that doesn’t sit well with everyone – and the Fisher v. University of Texas at Austin case that the U.S. Supreme Court offered an opinion on Monday is proof.

In 2008, Abigail Fisher, a white student, brought a lawsuit against the university on the grounds that racial preferences toward minorities kept her out of the freshman class, which she said violated the Fourteenth Amendment. Her case was at odds with previous affirmative action rulings like Grutter v. Bollinger, which upheld the University of Michigan law school’s ability to consider race in the admissions process.

In Monday’s opinion, the Supreme Court sent the Fisher case back to a lower court for reconsideration, giving hope to both sides of the affirmative action debate.

“I think there is a shared sense of relief, but also caution,” said Heather Alarcon, a senior corporate council member at the Association of American Medical Colleges.

She said medical schools have used policies like Grutter as guidelines for supporting diversity through the admissions process, based on the belief that it helps both students and patients. Alarcon said medical schools viewed race as one of many individual factors that could foretell how a future physician would make decisions and overcome obstacles.

The AAMC was one of several health care organizations that signed an amicus brief on the Fisher case, stating: “Medical schools have learned over many decades of experience that [their goals] cannot be accomplished unless physicians are educated in environments that reflect the ever-increasing diversity of the society they serve.”

Lopez said such diversity is important. He said his culture helps him relate to certain patients, some of whom are part of the growing number of Latinos in the U.S. — whether it means understanding their diet or building trust about sensitive subjects. Just this week he came across a troubled patient in the operating room during his summer fellowship at Massachusetts General.

“I walked over, was speaking to him in Spanish, and you could just tell how much better he felt about the surgery,” he said.

But Russ Nieli, a lecturer at Princeton University who writes on the topic, said affirmative action would only hurt black and Latino applicants and their reputations in the end.

Recalling a story that his mother, who worked at a Florida hospital, told him about a black patient who asked to be assigned to a white doctor, Nieli said that medical schools were only reinforcing negative stereotypes for certain minorities. He said a completely merit-based system, with attention to specific qualifications to meet patient needs, would benefit everybody.

Until that happens, “the huge credentials gap between black entrants to medical and professional schools and whites and Asians will remain — and along with it, the understandable suspicion of the competence of the black graduates,” he said.

From his roots in a rough New Jersey neighborhood, to finding a college program that helps Latino students develop a career path in the sciences, he said the opportunities geared toward minorities are necessary without role models in the community.

And as the first college graduate in his family, and a student at the Robert Wood Johnson Medical School, he is confident that good work will speak for itself in the long run.

“If someone gives me a chance to do something, I go all out,” Lopez said. “And the people who don’t do that are going to be discovered sooner or later.”