Later this month, the Supreme Court is expected to rule on King v. Burwell, a case challenging the validity of federal tax subsidies helping millions of Americans buy health insurance if they don’t get it through an employer. If the court rules against the Obama administration, those subsidies could be cut off for people in the approximately three dozen states using healthcare.gov, the federal exchange website.

Here are answers to some frequently asked questions about the case. 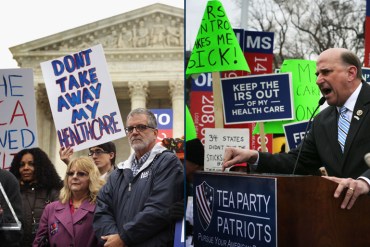 Q: What is this case about?

A: The case challenges the federal government’s ability to provide subsidies to individuals who buy health insurance on the federal marketplace, sometimes called an exchange. Those subsidies are provided to lower- and middle-income customers since the health law mandates that most people have insurance. At issue is a line in the law stipulating that subsidies are available to those who sign up for coverage “through an exchange established by the state.” In the heated politics following the health law’s passage, a majority of states opted not to set up their own exchanges and instead rely on the federal government.

In regulations issued in 2012, the Internal Revenue Service said the subsidies would be available to those enrolling through both the state and the federal health insurance exchanges. Those challenging the law insist that Congress intended to limit the subsidies to state exchanges, but the Obama administration says the legislative history and other references in the law show that all exchanges are covered. Many lawmakers and staff members involved in the debate agree.

Q: What happens if the court rules against the Obama administration?

A: According to the Department of Health and Human Services, more than 6 million people would lose their subsidies in the states where the federal government operates the health insurance exchanges.

An analysis from the Kaiser Family Foundation found that subsidized enrollees would face an average effective premium increase of 287 percent if the court rules against the administration. (KHN is an editorially independent program of the foundation).

Florida would have the most people lose subsidies (1.3 million), worth nearly $400 million, with Texas ranked second in both categories (832,000 residents losing $206 million per month), according to the KFF report.

Even people who were not getting subsidies could be indirectly affected by a Supreme Court ruling against the administration. That’s because the elimination of subsidies would likely roil the insurance risk pool. Without the subsidies, many healthy people are likely to give up their coverage and that would drive up costs for those continuing to buy insurance.

Individuals in state-run exchanges and the District of Columbia would keep their federal subsidies.

Q: If the Supreme Court rules against the Obama administration, when would subsidies disappear? Would those who lose subsidies still be required to buy health insurance under the law’s “individual mandate?”

A: Supreme Court decisions generally take effect 25 days after they are issued. That could mean that the subsidies would stop flowing as soon as August, assuming the decision is issued later this month, as expected.

Although the law’s requirement that individuals have health insurance would remain in effect, individuals are not required to purchase coverage if the lowest-priced plan in their area costs more than 8 percent of their income. So without the subsidies, many, if not most, people who had been receiving help would become exempt.

Q: Will Congress fix this?

A: Congress could restore the subsidies by passing a bill striking the line about subsidies being available through exchanges “established by the state.”  But given how many Republicans oppose the law, that sort of bipartisan cooperation is considered unlikely.

GOP lawmakers generally want to scrap the health law, but some back legislation that would keep the subsidies flowing temporarily. They would attach strings that Democrats and President Barack Obama will surely object to. For example, a proposal from Sen. Ron Johnson, R-Wis., would maintain the subsidies for current beneficiaries through August 2017 but repeal the health law’s individual and employer mandates and requirements for specific types of coverage.  However, a report from the American Academy of Actuaries said some changes favored by Johnson and other Republicans, such as eliminating the individual mandate “could threaten the viability” of the health insurance market. Republicans have not coalesced around a specific strategy.

States could consider setting up their own exchanges, but that is a lengthy and complicated process and in most cases requires the consent of state legislatures.  Many of those legislatures will likely not be in session when the court rules and would have to be called back to take action.

Sylvia Burwell, the secretary of Health and Human Services, told Congress earlier this year that the administration has no authority to undo “massive damage” that would come if the court strikes down subsidies in federal exchanges. But she also has said the administration will work with states to help mitigate the effects.

Q: Is this the last legal hurdle the health law will face?

A:  No, but it’s probably the most significant one left. In other suits, House Republicans are challenging the money used for the law’s subsidies, saying it was not properly approved by Congress and that the administration did not have the power to delay the law’srequirements that larger employers provide coverage or face a penalty. Additional legal challenges include several dozen cases still pending over birth control coverage.