Among the many struggles for starving artists is a lack of health insurance — something Amanda Palmer, a musician, artist and formerly with punk band The Dresden Dolls — knows all too well. 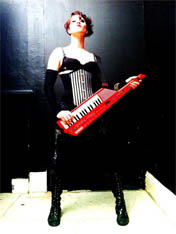 Yesterday Palmer tweeted about her struggles with insurance coverage after reading a New York Times column by Nicholas Kristof. Kristof wrote about his college roommate who is now uninsured and struggling with Stage 4 prostate cancer, and the issue hit close to home for the rock star. When she was 21, her older stepbrother died from Lou Gehrig’s disease. Because he lacked health insurance, his medical bills put a big strain on the family’s budget.

“It was really difficult for my whole family. He got really sick, really fast and everyone scrambled around trying to make ends meet,” Palmer said in a phone interview on Monday. “It was only a few years later that I graduated from college and found myself in the position of being uninsured.” She wrote a blog post on her website describing how after a long fight with her parents, she agreed to pay half the cost for her insurance, while her parents paid the rest.

“I remember really, really reluctantly writing my mother those checks for $115 when my rent was $350, so my insurance was almost half my … rent. I would have so much rather spent that money on concerts, buying music and books,” Palmer said. “But I had really seen the cautionary tale up close and I knew it was smart to be insured.”

On Twitter, Palmer wanted to know if there were others out there who struggled with insurance coverage. So on Sunday night she asked her more than 690,000 Twitter followers to reply with:

She labeled the tweet with the hashtag #insurancepoll and within a few hours she had a massive response. “I think I probably got more than 2,000 responses to the question,” she writes on her blog. A few notable tweets came from Dr. Atul Gawande, a contributor to the New Yorker and a surgeon at Brigham and Women’s Hospital in Boston, Wil Wheaton, an actor from Star Trek: The Next Generation and Palmer’s husband, British author Neil Gaiman.

@amandapalmer Actor. Insured through my union, eligibility determined by earnings. I worry I won’t make it every single year.

@amandapalmer: 1) USA 2) writer 3) Yes 4) Writers Guild of America. Free but I have to write a certain amount of films/TV a year to qualify.

But what surprised Palmer the most was the reactions Americans had to those who tweeted from outside the U.S. and vice versa.

“What was really interesting about what has happened in the past 24 hours is that people from overseas are shocked by the stories from Americans. And the teens and perhaps less educated people here in America are shocked that this [lack of insurance coverage] isn’t happening overseas,” said Palmer. So far she’s received tweets from the United Kingdom, Australia, Germany and a handful of other countries.

With the surge of tweets — already the hashtag has ‘trended’ on Twitter — Palmer asked for help tabulating the data on the incoming tweets. A woman from Michigan took on the task of collecting all the data Twitter users were providing. So far, 24.5% of the U.S. respondents do not have health insurance because of costs. 31.4% were from outside of the U.S. and all but one had some form of required health insurance. Palmer said she is looking forward to getting more data as the tweets slow down.

But why poll Twitter to learn about the uninsured and insured around the world? Palmer said she was just curious, but surprised to see that she could get people to open up about their coverage and bring insight in the health care debate — something she says politicians have been struggling to do. “I feel like I’m in such a cool position,” she said. “There are these two giant things that are disconnected, and I just bridged the gap and stand by and watch everyone talk to one another. I was thinking this just this morning politicians, health care reformers and people who are really full time invested in this issue, they spend their lives trying to figure out how to get this exact conversation going.”

In the meantime, Palmer is preparing to go on tour tomorrow. She’ll be traveling to 11 cities throughout Europe, but she said she’ll keep an eye on Twitter to see where the conversation goes. She’s been constantly tweeting her reactions and retweeting responses, all the while keeping her stepbrother in mind.

“People can relate.  He was classically uninsured, in the same way I’m seeing people on my Twitter feed,” said Palmer. “He was a painter, a writer and a musician and so I worshiped the ground he walked on. His death really hit me hard. And in all of these people I see a little glimmer of him.”

When A Rock Star Tweets About The Uninsured