Christine White pays $300 a year more for her health care because she refused to join her former employer’s wellness program, which would have required that she fill out a health questionnaire and join activities like Weight Watchers.

“If I didn’t have the money … I’d have to” participate, says White, 63, a retired groundskeeper from a Portland, Ore., community college. 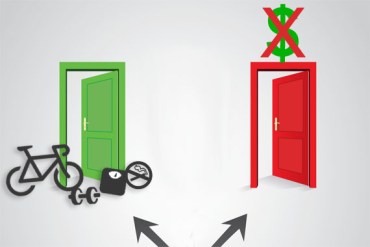 Like many Americans, White gets her health coverage through an employer that uses financial rewards and penalties to get workers to sign up for wellness programs.  Participation used to be a simple matter — taking optional classes in nutrition or how to stop smoking. But today, a small but growing number of employers tie those financial rewards to losing weight, exercising or dropping cholesterol or blood-sugar levels — often requiring workers to provide personal health information to private contractors who administer the programs.  The incentives, meanwhile, can add up to hundreds, or even thousands, of dollars a year.

So what is a voluntary wellness program and when do employer incentives cross the line to become coercive?

A proposed rule published this spring by the Equal Employment Opportunity Commission – the agency charged with protecting workers against discrimination – attempts to strike a balance between employers who want to use incentives to drive worker participation and consumer advocates who see penalties as de facto coercion. The plan drew about 300 comments from employers and consumer groups by a June 19 deadline, with plenty of criticism.

The equation tilts too far against workers “when … employers can charge you a couple thousand dollars more for refusing to give private medical information, [that] doesn’t sound very voluntary to me,” said Samuel Bagenstos, a University of Michigan Law School professor.

But many employers say the proposal doesn’t clear up conflicts between the health law and the ADA. In addition, it restricts their ability to offer rewards, which are needed to “engage employees and their families to be aware of their … lifestyle risks,” said Steve Wojcik, vice president of public policy for the National Business Group on Health. The EEOC has not set a timetable for issuing a final rule.

Under the proposal, wellness programs would be considered voluntary so long as the employer rewards or penalizes an employee no more than 30 percent of the cost of health insurance for a single worker. Since the average cost for such coverage is $6,025 a year, the 30 percent limit would be about $1,800.

Employers cannot fire workers for declining to participate nor can they deny them coverage, the proposal says.  They also must give workers a notice explaining what medical information will be obtained by the wellness administrator — often a private contractor — and how that might be used.

Some employers say the rule could force them to cut the size of wellness programs’ financial incentives or penalties, particularly for families and smokers.  Such limits could mean “advancements in workplace health improvement may come to an end,” wrote the Northeast Business Group on Health, a coalition of large employers, insurers and benefit consultants.

“It walks back people’s rights,” said Jennifer Mathis, director of programs for the nonprofit Bazelon Center for Mental Health Law, a legal advocacy organization for people with mental disabilities. In its comments, the group said the proposal would allow “employers to use steep financial penalties in wellness programs to force workers to disclose sensitive medical information.”

Interest in workplace wellness programs began two decades ago, prompted by employers’ rising health care spending. Today, a growing percentage of companies ask workers to answer lengthy questionnaires about their health, including their exercise and drinking habits and whether they are depressed. Some employers also require testing of cholesterol levels and blood sugar to assess who might be at risk for heart trouble, diabetes or other problems.

While aimed at preventing illness and encouraging a healthy lifestyle as a way to reduce health care costs, there is wide debate over whether the programs achieve those goals.

The health law permits employers to offer incentives or penalties of up to 30 percent of the cost of a health insurance plan – up from 20 percent under a previous regulation – if they set specific health goals for workers, such as quitting smoking or achieving certain results on medical tests. Most employers’ incentives are still well below those levels.

How does that square with the ADA’s restrictions on employers asking for personal medical information? That’s where it gets complicated. The EEOC long defined voluntary wellness programs under the ADA as those where “an employer neither requires participation, nor penalizes employees who do not participate.”

But what constitutes a penalty? Prior to the proposed rule, it was clear that employers who tried to charge workers the full cost of their insurance, or who barred them from coverage for refusing to participate, could run into trouble, said Sarah Millar, a partner at law firm Drinker Biddle in Chicago.

“What was not clear was at what point between zero and 100 percent [of the cost of employee health coverage] does a program not become voluntary?” she said. “Now, as long as it’s below 30 percent and meets certain disclosure requirements, then a program is still considered voluntary.”

Some consumer advocates say that level is punitive.

“Medical questions that an employee may only decline to answer if he or she agrees to pay thousands of dollars more for health insurance can hardly be called ‘voluntary,’” the Bazelon center  wrote. The group wants the government to prohibit penalties for those who decline to answer such questions.

Consumer groups also want increased privacy protections for those who share their health information with a wellness plan.

The proposed rule says employers whose wellness programs are tied to their health insurance benefits must tell workers specifically what information will be gathered and with whom it might be shared.

Still, Anna Slomovic, a researcher at the George Washington University Cyber Security Policy and Research Institute, says that provision should be broadened to encompass wellness programs that are unrelated to a health plan.

“This leaves unregulated a number of wellness programs … even though these programs collect personal health data,” she said in her comments. The protections should include all data, “including that collected via fitness trackers and mobile apps.”

Many employers also asked the administration to allow them to impose penalties of up to 50 percent of insurance costs for tobacco users, which the federal health law allows.

“This is potentially putting a wrench in the system for some employers,” said Seth Perretta, a principal at the Groom Law Group in Washington D.C. “If it’s finalized, it would force them to reduce incentives back to 30 percent.”

Additionally, employers want to be able to charge workers 30 percent of the cost of more expensive family coverage, if the family is also eligible to participate in the wellness program — something the federal health law allows but the proposed rule does not. That could dramatically increase the dollar amount of the financial incentive or penalty.

When Does Workplace Wellness Become Coercive?