As dense smoke from wildfires spread through communities across western Montana last summer, public health agencies faced an indoor problem, too: Residents suddenly needed filters to clean the air inside homes and public spaces, but there was no obvious funding source to pay for it.

Ellen Leahy, the health officer in charge of the Missoula City-County Health Department, said that in the past, when wildfire smoke polluted the air outside, nobody really talked about air filters.

“We’d always told people to go indoors, thinking the air might be a little better,” Leahy said. “Well, that was not necessarily true anymore.” The size and proximity of fires, coupled with weather trends and local topography, led to an inversion layer of dirty air that hung around communities for weeks on end. Without air filtration systems, it invaded indoor spaces, too.

Wildfire smoke is bad for everybody, but especially older people and those with chronic heart and lung diseases. Joy and Don Dunagan, who live in Seeley Lake, Mont., check both those boxes.

“We put towels around the doors, the windows — everything,” Joy said. “Grime from the smoke came in through the whole house.”

The Dunagans are both 69 years old and on oxygen much of the time. Joy is a stroke survivor. Don recently developed asbestosis after almost 40 years working at an aluminum factory.

“I’ve got less than 50 percent breathing capacity right now,” he said. “Anything that I could have done a year ago, I can’t do now. And then that smoke on top of it — it was killing me.”

But with no family in the state and limited mobility, the couple had to stay inside their house all summer. Amy Cilimburg, who directs a small nonprofit called Climate Smart Missoula, helped the Dunagans get two HEPA air filters and make a safe air space inside their home.

The unit resembles a space heater, but can actually scrub out the fine particulates in wood smoke that are so hazardous to health.

“There’s a prefilter that takes out the large stuff, and then — that’s the HEPA filter,” Cilimburg explained, as she helped install the second filter in the Dunagans’ living room.

In early 2017, Missoula County’s Health Department launched a pilot program with Climate Smart to get HEPA air filters to homebound seniors in Missoula ahead of the fire season. But when wildfire smoke swamped Seeley Lake last summer, they also started to distribute filters to residents who have a high risk of developing breathing problems and other health issues related to smoke pollution. Local health providers helped identify those people, including the Dunagans.

Don said he slept in his recliner, near the air filter, every single night while the smoke was bad.

“I believe that machine saved my life,” he said. “I really do.”

Then the wildfires dragged on into the school year. And children, who are also extra susceptible to the pollutants because their lungs are still developing, sat in smoke-filled classrooms across the county.

Missoula County’s health department and Climate Smart scrambled to get air filters to the schools most deeply enveloped in smoke. Other nonprofits pitched in to raise money and buy filters. Almost overnight, the smoky haze inside classrooms disappeared. 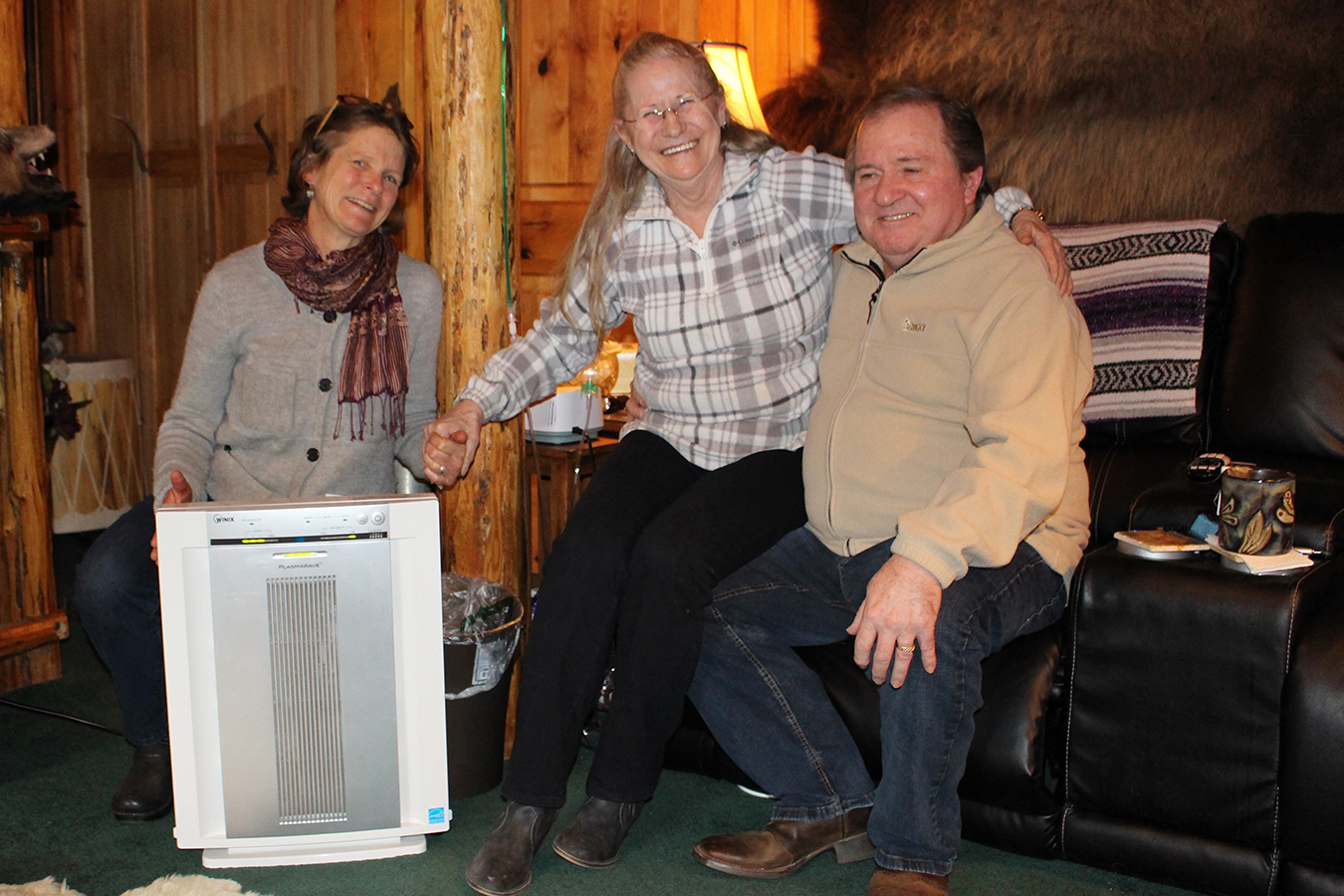 The county health department’s Leahy said that strategy of finding a solution and taking action was a big shift away from the agency’s usual approach of issuing advisories to people to hunker down and stay indoors. And they need to keep acting, she said.

“There has to be a more concerted effort — which we are a part of — to provide clean, indoor air. Filtered indoor air. Messaging that the air isn’t good — isn’t enough,” Leahy said. “And that we have to plan to be able to do that, and deploy those systems much more quickly, as you would in an emergency.”

The challenge is figuring out who pays for it.

Portable HEPA air filters that can clean a big room cost just under $200 each. Even with a bulk discount, it cost about $30,000 to put those kinds of filters in just three of the 50 schools in the county last fire season. That didn’t even cover every classroom or grade, Leahy said.

Nor are individual filters necessarily the most efficient solution for schools and other big buildings — like day care centers, nursing homes or health clinics — said Missoula County air-quality specialist Sarah Coefield. It’s virtually impossible, Coefield said, to put a price tag on what it would cost to filter the air in every public space in the county.

“It would be a very high number, and I haven’t even wrapped my head around it,” she said.

Missoula County has one of the biggest and most experienced air-quality programs in the state, but the health department was not equipped to launch response on a large scale, Leahy said.

The health department is set up to regulate easily controlled, man-made sources of air pollution — such as factories or wood stoves — and to issue health advisories. The money the county contributed at the last minute to buy filters came from emergency funds, which quickly dried up.

Health officer Leahy said they all tried their best to respond to the need.

“But it was very, I would say, makeshift,” she said.

Scientists predict wildfires are going to get worse, so public health departments are starting to see a need for a more proactive approach.

“There’s not a new source of funding that we’re aware of,” Leahy said.

The state health department is in a similar bind. Currently, it has no resources specifically dedicated to protecting the public from wildfire smoke.

“I don’t anticipate that there’s going to be a lot of new monies coming,” said Jim Murphy, the chief of the communicable disease bureau at Montana’s Department of Public Health and Human Services. “Given the state’s budget crisis, I think it’s maybe making the best of what we already have.”

Cilimburg of Climate Smart said she’s proud of Missoula’s leadership and of the community’s efforts to step up. But she stresses that wildfire seasons are getting longer and more intense — the smoke will come back.

“Providing some money upfront can save you money down the road,” Cilimburg said. “And we’re just not very good sometimes at thinking about it. We’re good at responding to disasters, and not as good as being prepared for them upfront. That’s kind of the conversations we’d like to spark.”

For now, the county health department will continue to partner with Climate Smart. This winter, they’re busy building on the foundation they established over the summer — spreading the word about the usefulness of air filters and the message that clean air is a collective responsibility.

The program has a cache of about 100 filters to help those in need. And they’re working with larger public institutions, like school districts, to help them improve their air filtration systems — and encouraging them to add such systems to their own budgets.

Don Dunagan said the responsibility is also on everyone who lives in the area to acknowledge the risks of living with wildfire, and to create their own clean-air space.

“A lot of people don’t realize what that smoke will do to you,” he said. “You might tough it out now, but if you go long enough, you’re going to have breathing problems.”

KHN’s coverage of these topics is supported by Heising-Simons Foundation, John A. Hartford Foundation and The SCAN Foundation

When Wildfire Smoke Invades, Who Should Pay To Clean Indoor Air?