California’s Jerry Brown, the governor of the most populous state in the union, a state that has aggressively pushed ahead with the Affordable Care Act even when it wasn’t the “in-thing,” is sitting out this year’s Democratic National Convention. Like millions of American kids who returned to school this week, Brown has too much work to do, his office told the Sacramento Bee. He has some 800 bills that he must sign or veto by September 30, and Brown has warned state lawmakers that he plans to call a special legislative session on health care to ensure the approval of bills needed to keep up the state’s break-neck pace implementing the health law. 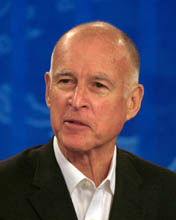 And while national conventions can be ego trips for politicians seeking affirmation from their devoted fans, Jerry Brown is plenty confident. “[Brown is] a guy who doesn’t have anything left to prove and who seems entirely focused on being governor,” said John Myers, political editor at the ABC affiliate in Sacramento, Calif. “Jerry Brown has never really fit in with the national Democratic crowd – he challenged a sitting president, repudiated party politics after the 1992 primary fight with Bill Clinton – and so I’m guessing the comfy confines of his California home were more to his liking.”

Brown, an irascible and learned 74-year-old who is serving his third term as the Golden State’s governor, is known for his un-conventional ways: As mayor of Oakland, Calif., he slept on a futon in a loft in the city’s hard-scrabble downtown district, and, many election-cycles ago, he dated the singer Linda Ronstadt. (He married Anne Gust, the former chief administrative officer for the Gap, in 2005. Gust’s father, Rockwell Gust, died recently, and the state Democratic Party spokesman said this was another reason Brown would be staying put in California.)

But even without Brown, California — with 55 electoral votes and hundreds of delegates — is well-represented in Charlotte this week. California Attorney General Kamala Harris, a fast-rising star in the Democratic party and President Obama’s go-to gal for West Coast fundraising, delivered a well-received speech on Wednesday night, and Antonio Villaraigosa, Mayor of the City of Angels and chairman of the Charlotte shin-dig, will speak this evening just before Obama accepts his party’s nomination.

Where In The World Is Jerry Brown?