The student comes in for a pregnancy test — the second time she has asked for one in a matter of weeks.

She’s 15. She lives with her boyfriend. He wants kids — he won’t use protection. She loves him, she says. But she doesn’t want to get pregnant. She knows how much harder it would be for her to finish high school.

At many schools, she would have gotten little more than some advice from a school nurse. But here at Anacostia High School in Washington, D.C., she gets a dose of midwife Loral Patchen.

Patchen asks her bluntly what she’s going to do about it. Because one of these days, the test is going to show a positive.

Patchen talks her through a range of birth control methods. There’s a shot you take every few months, an IUD, or a small implant that goes into your arm, which can prevent pregnancy for years. And, of course there are birth control pills. The student opts for pills, and leaves Patchen’s office with a one-month supply with a standing order for refills through the school clinic.

The hope is that this interaction will mean one fewer teen pregnancy in the city. In the Washington, D.C., neighborhood where this student lives, her chance of getting pregnant is nearly three times the national average.

While U.S. teen pregnancy rates overall have trended steadily downward in the past decade, they remain high in some communities. The rates for black and Latina teens is around twice that of whites, and kids from low-income families tend to have higher rates. 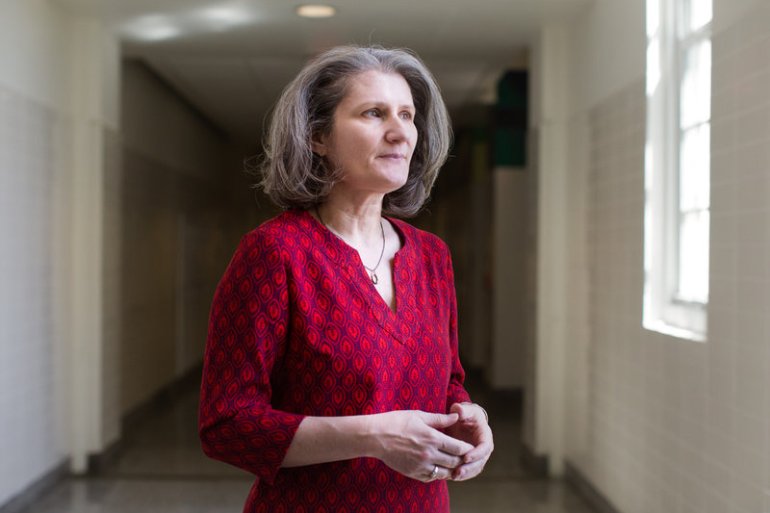 Patchen has been a midwife for 20 years and is the founder of the Teen Alliance for Prepared Parenting, or TAPP, at MedStar Washington Hospital Center. (Meredith Rizzo/NPR)

Patchen had been trying to combat the city’s teen pregnancy rates for 20 years as the founder of the Teen Alliance for Prepared Parenting, or TAPP, at MedStar Washington Hospital Center. She was happy with what they accomplished, but she wanted more access to the young people who needed her. Her organization received a 2015 grant from the CareFirst BlueCross BlueShield health insurer to start working in two schools. Now she’s one of a handful of school midwives in the country, she said.

“It’s much better to go where the need is rather than to sit back and wait for the need to come to you,” she said.

And her role goes beyond providing prenatal care for the five to eight pregnant students who get care in the school clinic each year. Being at the school gives her a chance to help prevent pregnancies in the first place. “I wouldn’t have seen these youth in any other setting — not easily, anyway,” she said.

As the school midwife, Patchen can be an informal — and reliable — resource for students’ questions about sex and contraception and relationships.

“I love it when I’m walking in or in the hall during lunch because I see people and they recognize me,” Patchen said. “And they come in to ask me a question and they’ve got their two girlfriends with them. And we’ll talk about condom use or a side effect of a particular method or they’ll say ‘I heard …'”

If she were in a hospital, seeing young people only after they’re pregnant, she would never get this kind of interaction, Patchen said. Plus, the information she gives them spreads through their circle of friends.

At the school, Patchen keeps her schedule flexible to leave room for informal interactions and walk-in appointments, alongside her regular appointments with students.

When a student comes in, Patchen can offer counseling and immediate options. If a student decides she wants an IUD, Patchen can insert it on the spot. She can prescribe birth control pills and then hand the student a packet. 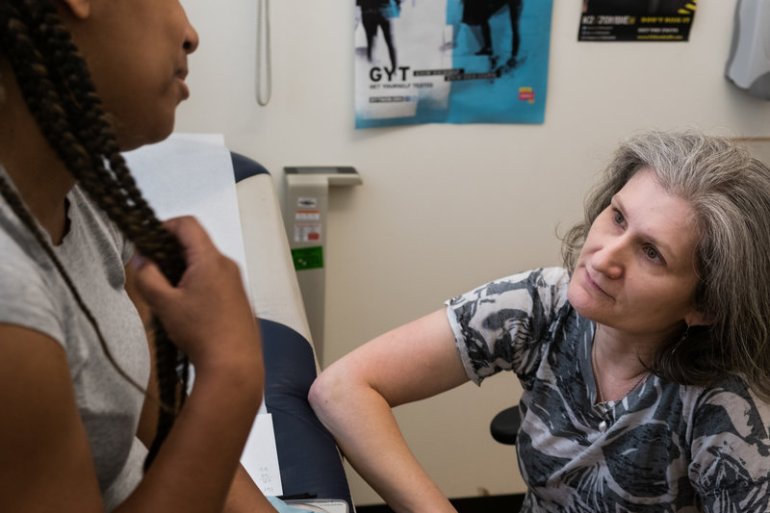 The CareFirst grant pays for the services and any contraception the students request, so students don’t have to rely on insurance to cover them.

“I feel really good about the fact that we offer the full range of options and we have very, very low removal rates,” Patchen said. She said that she talks students through the different methods and their adverse effects, and leaves the decision about which — if any — method they want to use. “And if the decision is ‘yes,’ it’s a very informed and well-grounded decision,” she said.

In the three years that she’s been working out of Anacostia High School, Patchen said, no students participating in the program have had a subsequent pregnancy. And after choosing a long-term birth control method like an IUD, 85 percent of Anacostia students are still using it one year later. 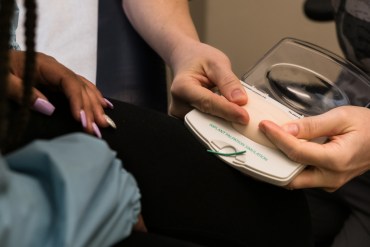 Patchen discusses a long-term implant as a birth control option. A grant pays for the cost of contraceptives that students ask for. (Meredith Rizzo/NPR)

Patchen can also test for sexually transmitted diseases, or STDs, including doing rapid HIV tests in the school clinic’s lab.

Just as critical, she said, is the ability to spend time talking with students about their lives — from deciding not to have sex, to navigating relationships.

For instance, she asks: “‘Who makes a good girlfriend or a boyfriend? What is that kind of person? How do you make decisions together? What do you do when you have conflict?'”

The other part of Patchen’s job is on-site prenatal care for students who do get pregnant.

Last year, one of those students was Kiera — we’re using students’ first names only, to protect their privacy. When Kiera got pregnant, she was 15 — and scared. 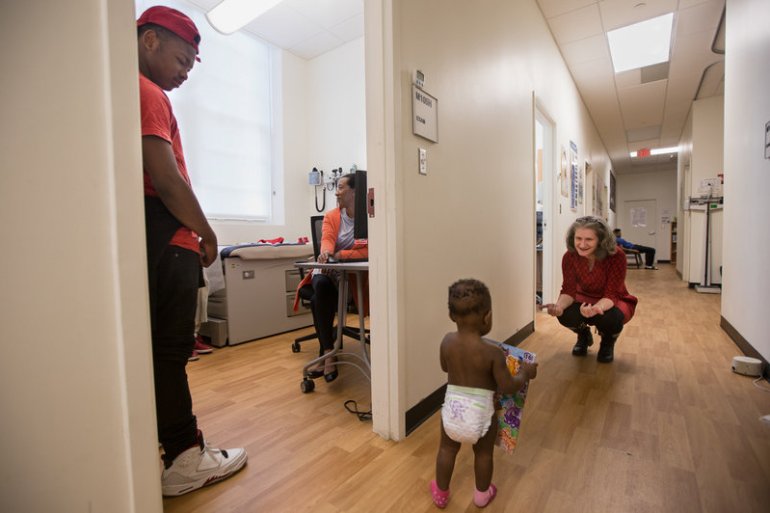 D’Monte and Kiera stop by the clinic because their daughter is running a fever. (Meredith Rizzo/NPR)

“When I met Loral and she started taking care of me in my pregnancy, she made me feel happier about being a parent,” Kiera said. “She helped me out a lot.”

Patchen said being in the school made it easy for Kiera to come in many times throughout her pregnancy, and talk about things like getting a required blood glucose test, or the benefits of breastfeeding — and also about her relationship with the baby’s father, D’Monte.

Since D’Monte is also a student at the school, Patchen could talk to them about parenting together. And even since Kiera and D’Monte broke up, Patchen still helps them figure out how to maintain a relationship so their daughter will have two parents.

Patchen was there, along with D’Monte and Kiera’s mother, when Kiera gave birth to her daughter last January.

“All I saw was excitement on [Patchen’s] face,” D’Monte recalled. “She was just so excited and she was so proud. So I couldn’t let her down.”

The baby is now a toddling 1-year-old who goes to the day care on-site at the high school. Kiera can bring her by the school clinic whenever she needs a visit with the pediatrician, or just to say hi.

“I love it when they come to the office because her daughter is laughing and she’s responsive to things and they’re responsive to her. And it’s a beautiful thing,” Patchen said. 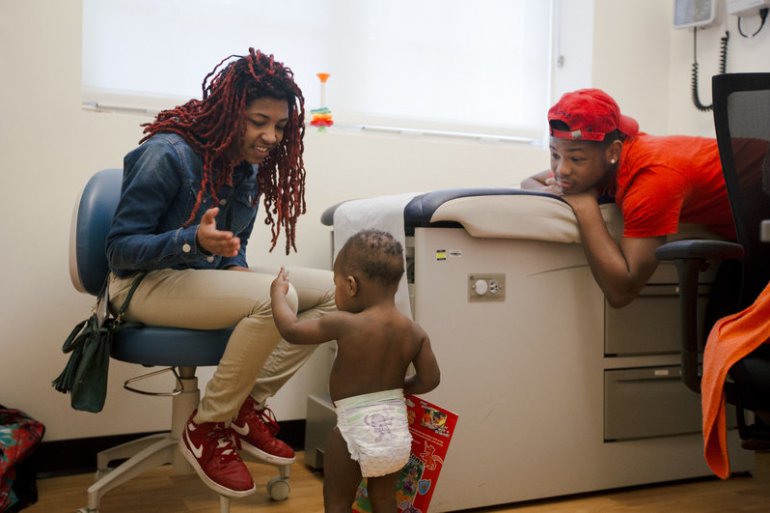 New parents Kiera and D’Monte attend the same school and Patchen uses every chance to talk to them together about issues they’re facing. (Meredith Rizzo/NPR)

The fact that this is a happy, communicative family is not an accident, Patchen said. There were times of frustration, times of disagreement — it could have gone badly. But everyone — the TAPP team, the school clinic staff and the student parents — put in a lot of hard work to do the best they could by this child.

Midwife Loral Patchen wants to be clear: She is by no means saying that teen pregnancy is a great thing. But Patchen feels strongly that once pregnant, a student needs real, steady support.

“Youth that are pregnant, they are very aware of all the judgment, the assumption they will fail: ‘You won’t be able to. Now you can’t.'” Patchen said. “It’s our mandate to make sure they still see themselves as having a future and an opportunity. And that means not buying in to the fact that they will fail with the next 60 years of their lives.”

She said a lot of people tell her her job sounds “dire” — working with young people facing the challenge of dealing with parenthood and high school at the same time. She said that’s not her experience. 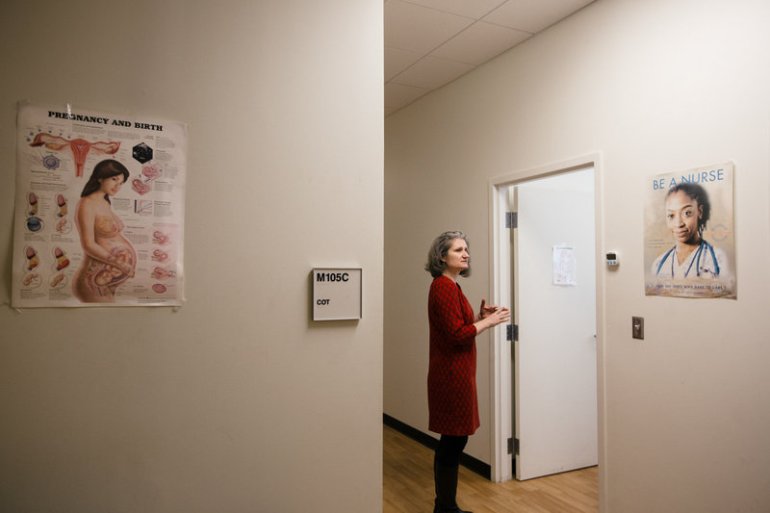 Patchen works in two D.C.-area schools. She says she believes she’s one of a very few school midwives in the nation. (Meredith Rizzo/NPR)

“My day at the school health center is the highlight of my week,” Patchen said. “I see young people be brave every single day that I show up there. And I see people willing to figure out how to do really hard things. What’s better than that?”

She wants more — more days in the school clinic, more schools in the program, more staff — to meet the need she sees every day she’s there. She thinks this is one of the few interventions that could have a direct impact on bringing down the high rate of teen pregnancy for these young women in the district.

‘Where The Need Is:’ Tackling Teen Pregnancy With A Midwife At School