Americans who want to ensure they have a say in how they die should examine the lessons of Oregon, a new analysis suggests.

Seriously ill people in that state are more likely to have their end-of-life wishes honored — including fewer intensive-care hospitalizations and more home hospice enrollments — than those living in neighboring Washington state or the rest of the country.

In 2013, nearly two-thirds of Oregonians who died did so at home, compared with fewer than 40 percent of people elsewhere in the U.S., according to the report published Wednesday in the New England Journal of Medicine. Previous research had shown that more than 85 percent of Americans say they’d prefer to die at home.

“Obviously, if you’ve spent decades trying to improve your end-of-life care, it’s pretty rewarding to see that something changes,” said Dr. Susan Tolle, director of the Center for Ethics in Health Care at the Oregon Health & Science University in Portland, who co-led the study.

The review analyzed Medicare fee-for-service claims data from 2000, 2005 and 2013, and it compared end-of-life care in Oregon and Washington — a nearby state with similar demographics and attitudes toward end-of-life care — with the rest of the U.S., excluding those two states.

More than 40 percent of patients in Oregon were enrolled in home hospice in 2013, compared with about 30 percent in Washington and fewer than 20 percent in the rest of the U.S, the analysis found.

Oregon, which enacted the nation’s first death-with-dignity law and led the way on implementing portable medical orders for treatment at the end of life, may be reaping the results of those and other efforts, said Tolle’s co-author, Dr. Joan Teno, a professor of medicine, gerontology and geriatrics at the University of Washington in Seattle.

Pat Duty, 64, who ran a Portland floor-covering business with her husband, Jimmy, for years, said Oregon’s palliative care culture helped guide treatment decisions after his 2013 diagnosis of lung cancer and dementia. Jimmy Duty wanted limited medical interventions; he had a do-not-resuscitate order, plus a request to avoid the ICU.

“He was very clear that quality of life was his first choice,” Pat Duty recalled. “We knew we needed to discuss these things while he could make decisions for himself. We wanted to give him the dignity and grace he deserved for his final couple of years.” He died in October 2015 at age 74. 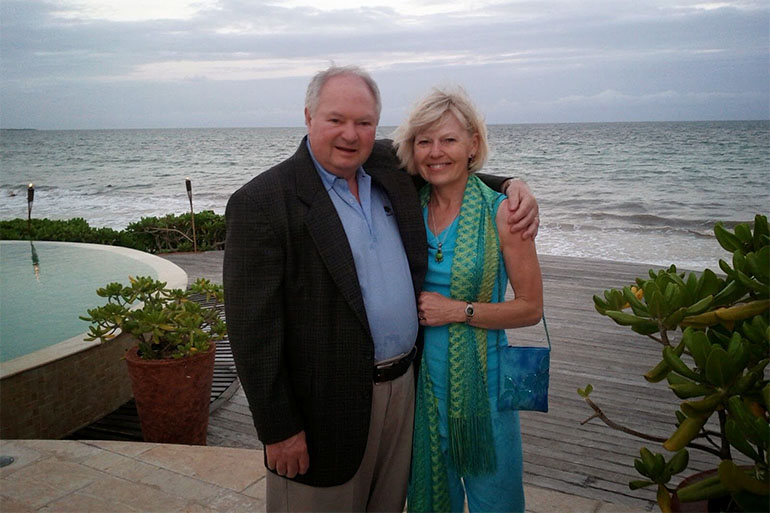 Pat Duty of Portland, Ore., cared for her husband, Jimmy, after a diagnosis of lung cancer and complications that led to his death at age 74 in 2015. The couple discussed end-of-life treatment options and palliative care, part of Oregon’s integrated system that sets it apart from other states. (Photo courtesy of Pat Duty)

Creating such a culture is much harder than it looks, Tolle and Teno argued. Oregon has successfully integrated awareness of end-of-life care at all levels, from state government and emergency care to individual decisions made by patients and their doctors.

“If patients’ goals are not linked to actionable care plans that are supported by local health care systems and state regulations, many patients who wish to remain at home will die intubated for all the reasons the current system fails them,” they wrote.

Across the U.S., there’s been a push to promote ways to indicate end-of-life treatment preferences, including advance directives, which provide guidance for future care, and Physician Orders for Life-Sustaining Treatment, or POLST, portable medical orders authorizing current care. Twenty-two states now have POLST programs and others are working on or considering them, said Tolle, who co-led the creation of POLST in the early 1990s.

But the researchers warned that, while POLST efforts are important, simply filling out the forms is not enough.

“We were highlighting that there’s no simple answer,” Tolle said. “You can’t just do one thing and think that you will change the culture of end-of-life care. It is a whole lot of work.”

Dr. Scott Halpern, a medical ethics and health policy expert at the Perelman School of Medicine at the University of Pennsylvania, has been a chief critic of POLST efforts, contending that there’s little evidence that the medical orders improve quality of life near death.

The new analysis by Tolle and Teno doesn’t fill the gap, he said. But he agreed with the authors’ contention that a focus on single interventions ignores the complexity of end-of-life decisions.

The new analysis, which was funded by a grant from the Robert Wood Johnson Foundation, underscores that families and patients outside of Oregon must be vigilant to ensure they receive the care they want, Tolle said.

“The level of care you receive near the end of life depends more on the state you live in and the systems they have in place than your actual wishes,” she said.

Where You Live May Determine How You Die. Oregon Leads The Way.