President Donald Trump has collided with a wave of public disagreement by moving to strip the Affordable Care Act of provisions intended to keep insurance prices stable.

In a poll conducted before Trump’s Thursday announcement of unilateral changes to the law, 71 percent of the public said they preferred the administration try to make the law work rather than to hasten replacement by encouraging its failure. Even Republicans, by a small margin, favored a more conciliatory approach to the law, according to the poll from the Kaiser Family Foundation. (Kaiser Health News is an editorially independent program of the foundation.) 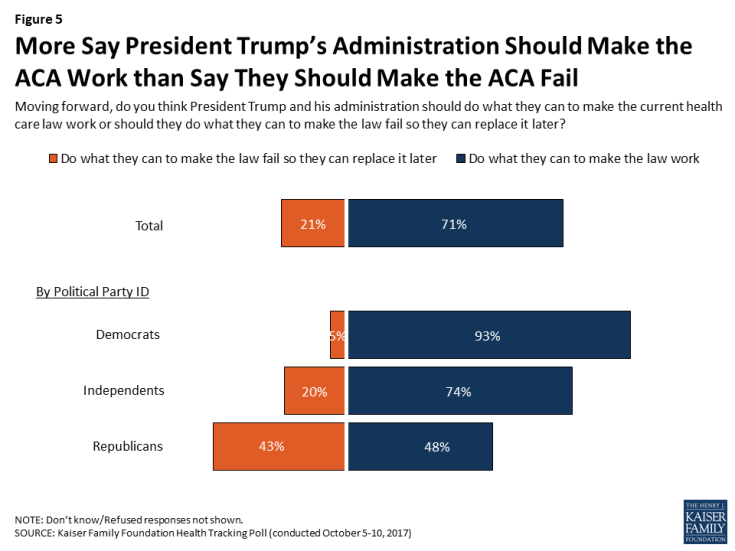 Trump took the opposite tact Thursday, in the wake of Congress’ failure to replace the 2010 law. He announced two actions that are likely to disrupt the insurance markets for people who buy their policies on their own rather than through their employers.

First, he ordered the government to allow associations of small employers or other membership groups to band together and offer their own insurance that would not have to provide all the types of coverage required under the health law. That same executive order also directs officials to loosen rules for low-cost, short-term health insurance.

Trump argues these changes would give consumers cheaper coverage options, while many health care experts fear it could shift insurance markets back toward their pre-ACA configuration, when healthy people paid less but people with medical conditions often found coverage unaffordable.

Second, Trump ordered the government to stop paying insurers subsidies that allowed low-income people to avoid out-of-pocket medical costs that otherwise this year can be as high as $7,150 for individuals and $14,300 for families. Those insurance subsidies, technically known as cost-sharing reductions, or CSRs, had been embroiled in a legal and political battle between former President Barack Obama and Republicans over whether Congress had authorized the president to pay them.

The foundation’s poll, conducted Oct. 5-10, found that 60 percent of the public thought Congress should guarantee that these payments continue. A majority of Republicans, however, considered them bailouts of insurance companies and thought they should cease.

The poll found that 69 percent of the public favored broader bipartisan congressional compromise to continue the payments — as most Democrats desire — in exchange for allowing states to have greater (but unspecified) flexibility in what kind of plans could be sold on their marketplaces, as Republicans generally favor. Sens. Lamar Alexander (R-Tenn.) and Patty Murray (D-Wash.) have been trying to forge a deal to stabilize insurance markets that could draw support from both parties. The poll found that support for a compromise was equally strong among independents and members of both political parties.

The poll found no such comity in the views of most other issues relating to the health law. Democrats overwhelmingly want Trump and Congress to work together to stabilize the marketplaces, while Republicans by a narrow margin prefer lawmakers resuscitate efforts to replace the law. A majority of Republicans (56 percent) are confident Trump and Congress can work together on improving health care, while only 1 in 7 Democrats (14 percent) think so. Independents leaned toward the Democrats’ skepticism.

Even before Trump’s actions Thursday, 66 percent of Democrats thought his approach was undermining the insurance markets, but only 12 percent of Republicans thought so. Among independents, 41 percent thought Trump was hurting the markets.

The federal enrollment period for 2018 coverage begins Nov. 1 and runs through Dec. 15.

The telephone poll included 1,215 adults. Its margin of error is plus or minus 3 percentage points for the full sample.