The scene at Leon Medical Centers’ Healthy Living Facility in Miami on a recent Thursday resembled a cross between a luxury hotel and a theme park. 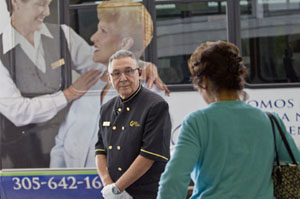 White-gloved doormen wearing porter uniforms ushered elderly patients from white vans into a gleaming lobby with colored terrazzo floors and a bubbling fountain. Greeters in green vests and ear bud radios welcomed the Medicare members and made sure their doctors knew that they’d arrived. Refreshments were proffered: Would they like a cafecito and pastelito for the wait?

And that was just the entranceway. Three more floors of the sprawling center bustled with Leon members meeting with physicians or dentists, taking healthy cooking classes, exercising in the fitness center or learning to use Facebook in a lecture hall.

It’s a one-stop shopping approach for healthcare based on a level of customer service and attention that, members tell the federal government, sets Leon Medical Centers apart in the highly-lucrative and super-competitive world of South Florida’s privately managed Medicare plans, or Medicare Advantage.

As the country grapples with far-reaching challenges in healthcare, companies like Leon are carving out a niche that is increasingly popular with Medicare beneficiaries — and demonstrating improvements in customer satisfaction and medical outcomes that translate into bigger profits.

“It’s always impressed me how Leon treats its patients,” said Nancy Fernandez, 72, of Miami, a Leon member since she began receiving Medicare benefits for a disability in 2003. “I come here because I see how much attention is given to members wherever they are, even in the cafeteria, from the moment you walk in until you leave.”

South Florida seniors like Fernandez are choosing Medicare Advantage for 2014 more than at any other time in the past 20 years, with more than half of all eligible seniors in Miami-Dade and Broward counties enrolling in a managed care plan instead of traditional Medicare.

With open enrollment running through Dec. 7 for plans that begin in January, advertising is in full swing, with TV commercials featuring South Florida celebrities: Salsa singer Willy Chirino pitching for Humana, and local chef Michelle Bernstein and her mother in a spot for AvMed.

For private insurers, the stakes are high: One Medicare Advantage member can deliver two to three times the premium earnings that a younger consumer in the individual market will generate, experts and economists say.

But the rules are changing, too, largely because of the Affordable Care Act, which has cut payments to the program. That’s driven some insurers out of markets and reduced the overall number of plans nationwide — except for South Florida, where seniors can choose from nearly 40 plans in Miami-Dade and 50 in Broward that are all rated average or better by the Center for Medicare and Medicaid Services, which oversees the public health program for seniors and the disabled.

In South Florida, Medicare Advantage plans are particularly popular among Hispanics, who are drawn to culturally sensitive programs that offer Spanish-speaking physicians and provide benefits such as free transportation, health lectures from dieticians, doctors or nurses, and even a game of dominoes in an “”enrichment room.” Other benefits can include optometry services and dental care, which traditional Medicare does not provide.

With so many plans for seniors to choose from, the U.S. Department of Health and Human Services created an annual star rating system that allows consumers to compare plan performance. The star ratings measure 36 areas, including health screenings, chronic condition management and overall satisfaction.

Leon Medical Centers Health Plans, administered by health insurance giant Cigna, will be the first Medicare Advantage plan in South Florida to earn a five-star rating next year. The plan, with about 41,000 members, will also be allowed to sign up members all year.

“It probably takes two or three [federal health care insurance] exchange enrollees to equal one Medicare beneficiary,” said Matt Eyles, vice president of Avalere Health, a healthcare consulting company in Washington, D.C. “When you look at where the opportunity is from the health plan perspective, that’s one of the things that’s very attractive and why there’s so much competition.”

Benjamin Leon Jr., founder of Leon Medical Centers, said one of the secrets to the company’s popularity is its ability to offer so many services under one roof. Leon sells only one plan, a Medicare HMO, and operates only in Miami-Dade, with seven medical centers and four Healthy Living Centers, with plans for three more lifestyle centers by 2016.

Medical centers have urgent care facilities, pharmacies and clinical offices staffed with primary care physicians and specialists, everything from podiatrists who clip toenails for diabetic patients to dentists, pulmonologists and dieticians.

With so many providers in one place — most of them salaried employees of the center — Leon says members can shorten the time between primary care physician referral to specialist to diagnosis.

But Leon also holds down costs by managing patients within the center’s network of providers. Fewer referrals to outside specialists means bigger savings for Leon, particularly important as Medicare Advantage cuts are phased in. He said the plan has not eliminated any benefits for 2014.

“The combination of having these big centers and doing most of the work ourselves instead of contracting it out,” Leon said, “and the combination of that and being a five-star plan … as the cuts come in, we should be able to sustain the benefits we have by simply being the top organization in town.”

Leon will be the only five-star plan in South Florida next year, but it is not the largest player in the region’s Medicare Advantage industry. That distinction belongs to the Kentucky-based health insurance giant, Humana Inc., which sells plans under the Humana Gold and CarePlus brands, and owns and operates 19 CAC-Florida Medical Centers, with the majority in Miami-Dade. CarePlus and Humana plans, both rated at 4½ stars, have the highest enrollment rates in South Florida, according to CMS. Care Plus plans have 13,000 members in Broward and 27,000 in Miami-Dade; Humana plans have 52,000 members in Broward and 39,000 in Miami-Dade.

Humana bought CAC in 2005, but the centers have a tradition of managed care in South Florida, dating to 1964, when the first clinic opened in Little Havana under the name Clinica Asociacion Cubana (Cuban Clinical Association) and the monthly charge was $5 for a family.

Kent said CAC, which received the state’s first HMO license in the 1970s, has not forgotten its roots.

“Our core competency,” he said, “is one in which we do very well in an underserved community, lower-income, senior population.”

Bert Valdes, chief operating officer, attributes CAC’s success to the strong relationships its physicians and staff have built with patients. Valdes said when Cubans migrated to South Florida in the 1960s and ’70s, many elderly immigrants found themselves at home with little social interaction and declining health as their children went to school or worked long days.

“Relationships drive a Hispanic’s decision making,” Valdes said at the August opening of a new CAC medical center in Margate. “This is a place where they can come every day and interact with people just like them.”

Managed care is a traditional model of healthcare in Latin America, particularly the Caribbean, said Steven Ullmann, a health policy expert at the University of Miami business school.

“These systems, these methodologies of HMOs, or managed care, are very common in Latin America,” Ullmann said. “So actually, the methodology was imported from Cuba.”

Of the top counties for Medicare Advantage enrollment in Florida, Miami-Dade is number one and Broward is second.

Ullmann said providers like CAC and Leon have taken the waiting room experience and transformed it into an opportunity for seniors to socialize and stay active.

“If you’re ever waiting to see doctor, you’re very stressed sitting there, staring at a wall, maybe a TV,” he said. “It’s a place to wait and stress more. Leon and CAC say, ‘No. This is a gathering place. There’s a café Cubano. There’s a pastelito. Let’s socialize while we’re waiting to see the doctor.'”

“It’s an environment that’s a very significant draw to people,” Ullmann said of the lifestyle centers. “If you can draw healthy individuals, you get paid $1,000 per person per month to care for them, and they can socially interact and enjoy services without needing much medical attention, you also can profit handsomely.”