There are 48.4 million uninsured Americans — about 18 percent of the population — according to the last Census. But who are they? And what is the best way to get them signed up for new health insurance coverage options that roll out this fall?

The U.S. Centers for Medicare and Medicaid Services has just released a brief for those with a stake in getting people signed up, including insurers, consumer advocates and state officials. The analysis breaks the uninsured down by age, race, geography and “lifestyle and psychographic segments” (that’s marketing-speak for people who share some of the same demographic profile).

Nearly half of the uninsured are young and healthy—that includes the so-called young invincibles, as well as older people who also “take health for granted.” They aren’t terribly motivated to enroll in coverage offered in the new online insurance marketplaces opening in October, but they’re exactly the sort of people the government needs to enter the risk pools if premiums are to be kept low. A little over half say that cost is the main reason they are uninsured. 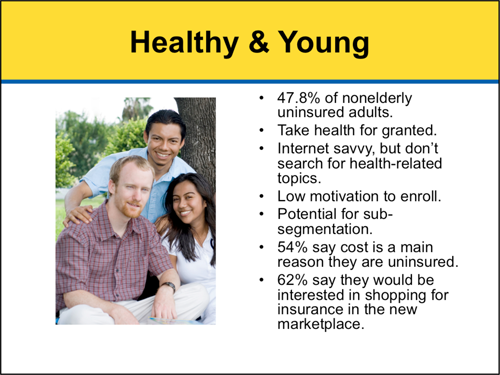 Then there are the nearly one-third of uninsured Americans who are in poor health, and concerned about not having coverage.  These are the folks who likely need health insurance most, and are likely to sign up for it. In the current individual marketplace, they’re likely to face high insurance costs because of pre-existing conditions. Nearly 80 percent cite cost as the main reason they are uninsured. 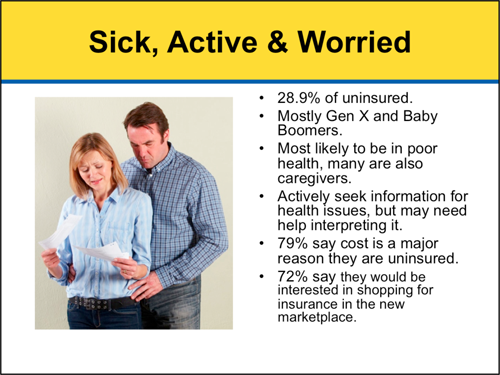 Lastly, there are the 15 percent of the uninsured who are a bit older and in generally good health, but who don’t know a  lot about insurance. Most say they are uninsured because coverage is too expensive. Like the “young and healthy,” only about half of them say they would be interested in shopping for insurance on the exchanges.  Almost three quarters cite cost as a problem. 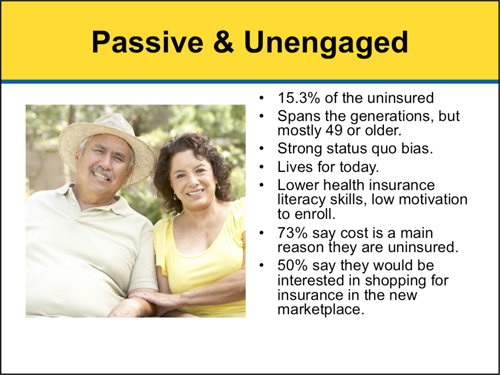 Other interesting facts from the report:

Who Are The Uninsured? The Feds Parse The Numbers