Every few minutes, Abril begins to choke. Diagnosed as a baby with severe cerebral palsy and epilepsy, the Santa Cruz, Calif., 8-year-old has never spoken, or walked or cleared her own throat.

Dozens of times a day, her parents, Rafael and Sonia, use a special machine to suction out saliva and phlegm from their oldest daughter’s mouth. Because choking and seizures can strike Abril anytime, a parent is always by her side.

Rafael and Sonia, both from Mexico, have lived in this country without permission for more than a decade. But only since the recent presidential election has a question haunted them: If they are deported, what will happen to Abril?

As the Trump administration promises to deport a broader range of people, parents like Rafael and Sonia increasingly are seeking help to stay in the country so they can tend to very sick children, according to interviews with doctors, lawyers and others who work with immigrants. And these professionals say they are struggling to come up with sound advice.

Rafael and Sonia know that many neighbors in their crowded mobile home park — along with millions of other immigrants living in the country without permission — are keeping to the shadows to avoid detection by federal authorities.

But Abril depends on her parents to stay alive. 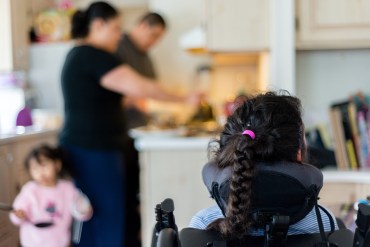 Abril sits in the living room while her parents make breakfast. Sonia and Rafael say the family always eats breakfast together and that dealing with Abril’s medical issues has made their family stronger. (Heidi de Marco/KHN)

The couple, along with other families in this story, spoke to California Healthline on the condition that their surnames be withheld, because they fear deportation. Abril and her younger sister are U.S. citizens.

Dr. Salem Magarian, pediatric director of the Santa Cruz Community Health Centers, said immigrant parents of his sickest patients are asking for letters documenting their children’s health care requirements. Some parents say they hope such letters will help them stay in the country if they are picked up by authorities.

“Some people are freaked out,” Magarian said. “Most people are concerned. Almost no one says ‘it’s not a big deal.’”

One of Magarian’s patients, a toddler named Leonardo, has had multiple surgeries for serious heart defects. The boy’s mother, Karla, has been in the country without papers for 23 years, having been brought to the United States at age 5. Karla is terrified by the prospect of leaving her children and being sent back to Mexico, a country she doesn’t remember.

Another child suffers from a life-threatening genetic condition that leaves him unable to speak or eat, Magarian said. Richey, 8, lost his father to cancer four years ago. His mother, Sugay, has been in the country illegally for 16 years.

Such fears are reinforced by news accounts. The Salt Lake Tribune recently reported that the single mother and sole caretaker of an 18-year-old with cerebral palsy and epilepsy was deported to Colombia.

In another case, an Ohio mother of four children — including one with a history of seizures — was deported to Mexico. A spokesman for Immigration and Customs Enforcement (ICE) told The Guardian that the woman’s case had been reviewed several times by the courts.

“For parents who are ordered removed, it is their decision whether or not to relocate their children with them,” the spokesman said.

Immigration officials say they continue, as under the previous administration, to target for deportation people who have committed crimes — but they also say the new administration has changed policies to no longer support the practice of selective enforcement.

But she also says she “absolutely” believes exceptions should — and will — be made in cases where deporting parents would cause “undue hardship” for a young U.S. citizen.

“That’s why Congress created these forms of relief,” she said. “I think most Americans would support that.”

Abril’s father, Rafael, arrived in Santa Cruz from Mexico as a teenager 19 years ago. His brothers are U.S. citizens and his mother is a legal permanent resident. In March 2001, before his 21st birthday, Rafael’s mother applied for a green card for him. He said he’s still waiting for the application to be processed.

After he’d been in California for nearly a decade, he fell in love with Sonia, who had arrived in the U.S. in 2006. She became pregnant. Everything seemed normal until she was 35 weeks along and stopped feeling the baby move. After an emergency cesarean section, Abril was rushed to Lucile Packard Children’s Hospital Stanford.

Magarian began caring for Abril when she came home at 6 weeks old. Given Abril’s serious brain damage and severe cerebral palsy, Magarian didn’t expect her to make it past six months.

Abril was in the hospital constantly at first. Her parents found great solace in their faith as they struggled to accept their new reality.

Over time, they learned the intricacies of caring for their daughter: how to suction her mouth, what to do if her gastrointestinal feeding tube gets blocked or she has a seizure, which of her grunts are normal and which require a call to 911.

Mostly because of her parents’ unwavering attention, Abril’s condition has stabilized over the years, Magarian said. Still, her health remains precarious, and she remains vulnerable to seizures and pneumonia. Many children in Abril’s situation end up hospitalized repeatedly, he said. 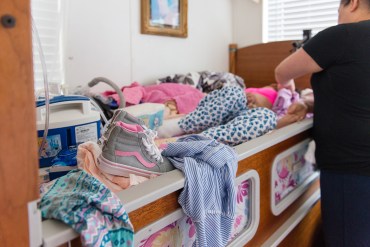 Sonia puts Abril down for a nap. (Heidi de Marco/KHN)

Even so, until recently, Rafael and Sonia had begun to feel they were living something of a normal life. Sonia watched their daughters. Rafael rode the bus each day to his job as a cook. A special-education teacher from the local school district came to the trailer twice a week to work with Abril.

Rafael and Sonia worried less about deportation during the Obama administration, which prioritized the removal of immigrants with criminal records. Donald Trump’s promises of a border wall and mass deportations made them nervous.

Soon after, Rafael and Sonia hired an attorney to help them become legal residents.

Some advocates say they worry that desperate families with chronically ill or developmentally disabled children are unwittingly putting themselves at greater risk of deportation by seeking legal help.

Often the applicants get turned down, triggering deportation proceedings.

In the best-case scenario, a judge will cancel the parent’s removal because of the hardship it would cause for a medically dependent child. But judges don’t always do this. Barbara Pinto, a senior staff attorney at El Centro Legal de la Raza in Oakland, said more families have been asking her organization about this legal channel. She recommends against it.

“It’s seen as very irresponsible and unethical” for attorneys to suggest such a risky process, she said.

Rafael and Sonia know they’re taking a risk. But they don’t know what else to do.

These days, they rarely venture out of their trailer. No more trips to the park. No more weekend strolls at the shopping mall. 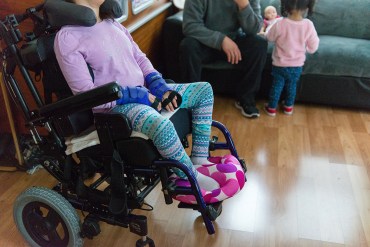 Rafael spends time with his daughters. The fear of deportation has limited the family’s time outdoors. (Heidi de Marco/KHN)

In case they get picked up by immigration authorities, they have been writing down the details of Abril’s care. But those details could fill a book, they say, and they don’t even know who’d be willing to take her.

Her uncles feel so uncomfortable with her serious health problems they don’t visit anymore. Rafael’s mother is too frail to lift her 53-pound granddaughter. Certainly someone could care for Abril’s healthy younger sister. But Abril?

“Nobody wants that big a responsibility,” Sonia said.

They think their best option might be a couple whom they barely know, whose own disabled child passed away. If that doesn’t work out, Abril could end up in foster care.

Rafael and Sonia say they wouldn’t be able to get the same financial support for Abril’s care in Mexico. Medi-Cal and California Children’s Services pay for the expensive equipment and medication that keep Abril alive — but only here in the U.S. Together, Abril’s three seizure medications cost about $5,000 a month, an amount they say they cannot possibly afford on their own.

“If we go to Mexico and we have to bring her,” Sonia said, “it is certain she will not live much time.”

Priscila Rodríguez, associate director of Disability Rights International, said Sonia’s concerns are valid. Her organization has documented the condition of people with disabilities in Mexico, finding they often are segregated from society and abused.

Rafael and Sonia aren’t certain how much their daughter understands; her developmental delays are profound.

But, over time, they have learned to love things about her that other people don’t see: the peaceful expression that crosses her face when they hold her. The smile that started appearing much more often after her little sister was born. Her apparent affinity — shared with little girls the world over — for Anna and Elsa in the Disney movie “Frozen.”

Sonia smooths Abril’s hair and places her daughter gently on a bed made up with “Frozen” sheets.

“She gives us love how she can,” she says.

Who Will Care For Abril? Parents Fear For Their Disabled Child If They Are Deported