Americans have always loved the next big thing: the newest iPhone, the freshest hi-def television, and the latest and greatest … medical technology. But that quick embrace of new innovations has come at a cost: It’s driving up the prices hospitals charge insurance companies who in turn raise premiums for the rest of us.

One of the best examples can be found in the operating room at the University of California San Francisco Mt. Zion Medical Center, which looks like a video arcade plunked down in a NASA Control Center.

The console where the surgeon controls the robot is some 10 feet away from the operating table. “I know this looks like old, 1980s video game console but it’s actually fairly high tech,” she says.

During surgery, black goggles give Greene a 3-D view inside her patient. She controls the robot’s camera and four arms using little joysticks and foot pedals.

Unlike manufacturing plants that often replace humans with robots, in the operating room, robots have become an extra set of hands – really expensive hands. Surgical robots can cost up to two million dollars plus pricey maintenance fees. 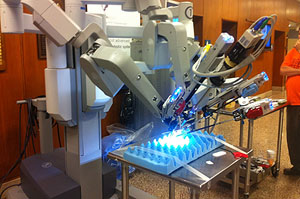 But after researchers studied thousands of robotic surgeries, it turns out that, but for a few exceptions, surgery outcomes aren’t any better and patient’s recovery time actually aren’t any shorter.

Still, that hasn’t been enough to stop hospitals from engaging in a really expensive game of keeping up with the Joneses. In the San Francisco Bay Area alone there are at least 20 of these robots. At about $2 million a pop, that’s $40 million.

But insurers typically won’t  pay more for a robotic surgery, or for the newest kind of MRI or CAT scan. So instead hospitals recoup their costs by charging insurance companies more for everything. And that contributes to $20 aspirin pills and the world’s highest health insurance costs.

But Greene says there’s no choice: “I think everyone just assumes you have it, because why wouldn’t you? It’s like having blood or beds or light in your OR now. You have to have a robot.”

Why Are Health Costs So High? The Robot Knows