When it comes to health care, even the seemingly easy things become hard.

Take coverage for young adults under the Affordable Care Act.

It’s one of the most successful — and popular — provisions of the law that have taken effect so far. Earlier this week the Obama administration announced that between September 2010 and the end of 2011, more than 3 million young adults under age 26 who would otherwise have gone without insurance gained coverage by remaining on their parents’ health plans. 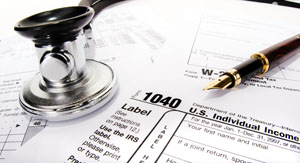 Last week, major health insurance companies, including United Healthcare, Aetna and Humana, announced they would continue to offer the benefit even if the Supreme Court strikes down the law when it issues its ruling, which is expected next week. Even some Republicans say they support the idea of letting young people remain on their parents’ health plans.

But it turns out that might not be so easy.

“This could have adverse tax consequences, both to the employee whose child is on the plan and to the employer, for purposes of payroll taxes,” said James Klein, president of the American Benefits Council, which represents large-employer health plans and companies that provide services to those plans.

How’s that? Well, says Klein, the problem is that lots of those young adults are no longer dependents of their parents for tax purposes. So if the employer continues to provide coverage to that adult child, the value of that insurance could be considered taxable income to the parent. Under the health law, such coverage is not treated as taxable income.

And while that could be a lot of money for some people, he says, the money is only part of the problem.

Then there’s the question of whether workers and employers might owe back taxes for coverage that’s been provided already. Klein says the Obama administration could theoretically take care of the problem by having the IRS issue some sort of clarification. But he worries that like everything else to do with the health law, even that could get caught up in partisan politics.

“I’m just afraid that rather than a quick resolution that provides clarity, both sides could arguably use this for their political benefit,” he said.

Why Many Young Adults Might Lose Coverage If Health Law Falls