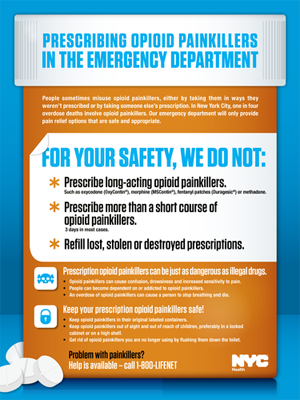 Posters like this one tell patients in New York City emergency rooms what to expect when it comes to painkiller prescriptions (N.Y. City Health Department).

The drugs have become a public health problem. Narcotic painkillers, such as Vicodin and Oxycontin, are involved in more than 16,000 overdose deaths a year nationwide. A third of unintentional drug overdoses in New York City in 2010 involved prescription painkillers.

So New York came up with nine recommendations for emergency room doctors to try to lower the risks.

Doctors who follow the advice will consider alternatives to opioids and prescribe only a few days’ worth of the drugs, if they decide that’s the best course for short-term pain relief. They’ll also avoid starting patients on long-acting opioids, like Oxycontin, and will refrain from replacing lost, or allegedly lost, opioid prescriptions without lots of due diligence first.

The steps strike some doctors as a common-sense way to rein in overuse of the drugs, though ERs are just one place, and not even the most important one, where patients get these prescriptions.

Will New York City’s latest public health push be copied elsewhere? Three doctors writing in the latest issue of JAMA, the Journal of the American Medical Association, say it should be.

“Abolishing pain is a great idea,” says Dr. David Juurlink, head of clinical pharmacology and toxicology at the University of Toronto. But the options really are quite limited, says Juurlink, a co-author of the editorial, and the unintended consequences of aggressive pain treatment are real.

“The expectation that pain should be abolished is leading to prescribing of opioids often at doses that would have been unthinkable” only a few years ago he tells Shots. “While we can hope to eliminate pain, often what we can best do is lessen it.”

As the editorial put it:

“Many physicians and patients have had unreasonable expectations of opioids and have seriously underestimated their risks. It is time to collectively lower expectations and prescribe these drugs less readily, to fewer patients, at lower doses, and for shorter periods.”

Juurlink says the New York City move, and a similar push in Washington state, bear watching and repeating. “I think front-line family medicine and internal medicine physicians should get on this bandwagon and re-examine how readily we prescribe these drugs,” he says. “How we’re doing things right now is generally unsafe.”