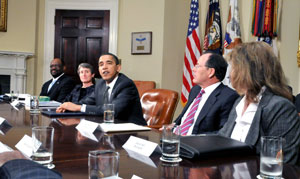 When President Obama met with health industry groups on May 12, 2009, hopes were high that reform could cut costs. Now, as legislation falters, some groups worry that proposed spending cutbacks might be used to narrow the budget gap, not expand coverage. (Ron Sach-Pool/Getty Images)

In their effort to overhaul the health system, President Barack Obama and congressional Democrats pressed hospitals, drug makers and other providers to accept billions of dollars in government payment cuts and new fees to help finance the legislation.

The groups made the financial concessions because the legislation promised a rich pay-off: millions of newly insured customers. But now, if the legislation fails, those savings, primarily cutbacks in Medicare and Medicaid, might end up being used for something far different: reducing the federal deficit.

The result would be lost revenue for influential industry players — as well as a sharp setback for AARP. The seniors’ group went along with the proposed Medicare cuts, even in the face of sharp criticism from some members, in part because other provisions would provide new help in paying for prescription drugs and long-term care.

The health care legislation isn’t dead yet, of course; supporters are hoping Obama’s Feb. 25 summit will give the effort new life. And they argue that the bill itself would help reduce the deficit over the long haul by lowering the growth of health care costs – an argument roundly rejected by many Republican critics.

Even if the legislation is doomed, it’s far from certain the savings would be used to narrow the budget gap. Indeed, health care interests and many Democrats would likely fight any effort to use the money for an anti-deficit effort.

But health care lobbysts privately acknowledge feeling uneasy that billions of dollars in health care savings have been put on the table and now could be used for other purposes.

The deficit is getting increased attention following last year’s record-breaking $1.4 trillion budget gap, which partly reflects the sagging economy and efforts by the Obama administration to spur growth. If current laws and policies are unchanged, the deficit will total an estimated $1.3 trillion this year and $980 billion for next year, according to the Congressional Budget Office.

Still any major action to tackle the deficit isn’t likely to occur until next year, at the earliest.

On the pending health care bill, hospitals agreed to $155 billion in reduced Medicare and Medicaid payments over the next decade in return for a promise that 97 percent of Americans would have health insurance.  Some officials said the deal is off if the $155 billion isn’t used for an expansion of coverage.

Drug makers, for their part, agreed to $80 billion in cost savings, including covering half of the costs of brand name drugs once seniors hit a gap in coverage in the Medicare drug benefit known as the “doughnut hole.”

If the health bill fails this year, some backers said, it could be years before industry groups join lawmakers to give it another try.

Besides hospitals and drug companies, insurers also pledged to help the overhaul effort. In exchange for a requirement that most Americans be required to purchase health coverage, insurers offered to drop practices such as denying health coverage to individuals with pre-existing medical conditions or cancelling policies when enrollees get sick.

AARP supported the House Democrats’ health care  bill for several reasons, including its planned  elimination of the “doughnut hole” in the prescription-drug benefit – as well as creation of a long-term care insurance program and better coverage of preventive services in Medicare. AARP also supported other provisions, including the bill’s subsidies, to help people under 65 buy insurance.

Now some of those groups fear that if health-care overhaul falters, their members might end up on the losing end.

“Our hope is that reform would get us to a less costly health care system,” that would also be more efficient, said Richard J. Umbdenstock, president and chief executive officer of the American Hospital Association. But if a health care overhaul does not pass, “the prospect of raw cuts comes back.”

Will Health Care Savings Be Used To Reduce The Deficit?