Louisiana and Georgia have many political similarities. Both states face significant health challenges affecting their populations. And until recently, both states had identical approaches to Medicaid expansion.

Georgia Gov. Nathan Deal, a Republican, has rejected expansion since he took office in 2011, and GOP lawmakers have repeatedly backed him up. They point to concerns about the future cost of expansion, saying it would eventually put too much strain on the state budget.

But on Friday, Louisiana will become the 31st state — and only the third Southern state — to expand the government program, which is jointly financed by state and federal governments. Gov. John Bel Edwards, a Democrat elected last fall, on his second day in office reversed the course set by his predecessor, Republican Bobby Jindal, by signing an executive order that began the process. Already, more than 200,000 state residents have been signed up.

“This isn’t just about expanding health care coverage and saving money,’’ Edwards said earlier this month when addressing reporters at a seminar sponsored by the Kaiser Family Foundation. “We want healthier people in Louisiana.” (KHN is an editorially independent program of the foundation.)

And there are small signs of a crack in the opposition to expansion in Georgia.

Georgia state Sen. Renee Unterman (R-Buford), who chairs the Senate Health and Human Services Committee, recently made headlines calling for Georgia to “re-examine’’ the possibility of Medicaid expansion, perhaps looking at a “waiver’’ plan similar to the Arkansas expansion program.

“We have to open that box and look just a little bit and see what’s available,” Unterman told WABE, the NPR affiliate in Atlanta. “Hopefully, if you draw down federal dollars, you can free up some of those state dollars. Right now, we’re just pumping out state dollars to stay in the midst of the crisis.”

A task force created by the Georgia Chamber of Commerce is formulating proposals that would extend coverage to more of the state’s uninsured but not along the lines of a conventional Medicaid expansion.

Yet Georgia state Rep. Sharon Cooper of Marietta, the Republican chairwoman of the Georgia House’s Health and Human Services Committee, told Modern Healthcare that she and her colleagues will entertain the proposals, but added that she doesn’t believe an expansion plan will solve the problem of access to care.

“The problem with expansion is, ‘Who is going to treat these people?’ ” Cooper said. “We don’t have the physicians, nurse practitioners or physician assistants to care for them in rural areas of the state.”

Since the beginning of 2013, five rural hospitals have closed in Georgia.

A Tale Of Two Southern States

America’s Health Rankings puts Louisiana 50th among states — 10 spots behind Georgia. The state has high rates of obesity, hypertension and diabetes, and a high mortality rate from cancer. For Georgia, the rankings note its large number of low-birthweight babies.

Louisiana also has a very high share of people living in poverty, but Georgia has a larger percentage without health insurance (16 percent).

One key difference between Georgia and Louisiana is the Peach State’s much stronger fiscal situation. Louisiana, where the energy industry is very important, has been hit hard by a decline in oil prices. Edwards inherited what he calls a record state deficit.

But ironically, that deficit eased the road for expansion, officials say. “The budget crisis was a catalyst for the Legislature to come aboard,” said Dr. Rebekah Gee, secretary of the Louisiana Department of Health. 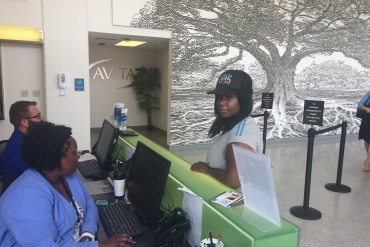 A study found that the expansion would produce net savings of $184 million for Louisiana, including in-state money paid to hospitals and moving some current Medicaid patients into a better federal matching rate of 95 percent.

Part of Louisiana’s push to enroll new people in Medicaid has come through a unique mailing to 105,000 food stamp recipients, like Aretha Frison, of the New Orleans area, who works at an animal hospital part time and battles depression.

She said she “had been hitting a lot of brick walls” when trying to get psychiatric care but now “it seems like Medicaid is the golden ticket.”

About 180,000 other people were ‘’auto-enrolled’’ from a previous “waiver’’ program that did not provide coverage for hospital services or prescription drugs.

Advocates for Medicaid expansion in Georgia often tout the expected benefits for the state’s hospitals, many of which are financially stressed. Though hospitals in other states have reported substantial revenue gains as a result of expansion, Louisiana’s complicated system of funding for hospitals may not yield many clear winners.

Louisiana has had an unusually heavy reliance on ‘’disproportionate share’’ funding, which the state pays out to those hospitals serving a large number of indigent or uninsured patients.

While the giant Ochsner Health System said Medicaid expansion would be slight improvement for the system financially, Baton Rouge-based Our Lady of the Lake Hospital said expansion may bring a payment cut overall with the loss of disproportionate share funds.

But low-income residents should benefit greatly.

More than half of the 4,000 medical patients at the New Orleans CrescentCare health center are expected to qualify for Medicaid under expansion, which may lead to better care options.

For example, Alicia Honomichl, a registered nurse there, said expansion will help more people obtain PrEP, a medication that can prevent a person from getting HIV from an infected individual, whether through sexual contact or sharing of drug-injection equipment.

Patient access to regular medications will be “low-hanging fruit’’ that will come from expansion, and “I expect [cancer] screenings to skyrocket,” he said.

This story was done in partnership with Georgia Health News.

Will Louisiana’s Medicaid Expansion Be A Harbinger For Georgia?