SAN FRANCISCO — As Catholic health care systems across the country expand, the University of California’s flagship San Francisco hospital has become the latest arena for an emotional debate: Should the famously progressive medical center increase its treatment space by joining forces with a Catholic-run system that restricts care according to religious doctrine?

At issue is a proposal that UCSF Medical Center affiliate with Dignity Health, a massive Catholic health care system that, like other Catholic chains, is bound by ethical and religious directives from the United States Conference of Catholic Bishops. Among other prohibitions on services, Dignity hospitals ban abortions unless the mother’s life is at risk, in vitro fertilization and physician-assisted death. Twenty-four of Dignity’s 39 hospitals prohibit contraception services and gender-confirming care for transgender people, such as hormone therapy and surgical procedures.

The affiliation would not keep UCSF from performing such procedures at its own medical center and outpatient clinics, and both entities would remain independent. UC doctors with practicing privileges at Dignity would be free to discuss all treatment options and could refer patients to other facilities when necessary.

But they would have to abide by Dignity’s care restrictions while practicing at Dignity hospitals.

For opponents of the plan, the issue boils down to a clear-cut principle: How can a public hospital that has been a leader in women’s health care and medical services for the gay and transgender community partner with a private system that not only denies such services but also casts them as immoral?

“It feels really concerning to me that our university that has been a fierce advocate for women’s health and LGBTQ health would be affiliating with a corporation that doesn’t support those values and restricts care,” said Dr. Jody Steinauer, who directs UCSF’s Bixby Center for Global Reproductive Health.

The two systems already have a relationship among several departments, including neurology, cardiology and adolescent psychology. This new affiliation would formalize the collaboration at Dignity’s four Bay Area hospitals and could expand services to departments including cancer care and cardiology, which would be staffed by UCSF physicians.

The proposal has sharply split faculty and medical staff at UCSF, who are airing their differences in impassioned letters and heated public forums. Participants on both sides include national figures renowned in their specialty fields.

Supporters of a closer alliance with Dignity say it’s an easy way to add capacity to a public health care system that is strapped for bed space and turning away more than 800 patients a year. They also note that Dignity is California’s largest private provider for patients with Medi-Cal, the state-federal insurance program for the poor.

“So much health care is being delivered in this country by faith-based organizations. For us to not participate with them seems like a missed opportunity,” Mark Laret, president and CEO of UCSF Health, told a December meeting of the UC Board of Regents, which must decide the issue.

The agreement could include a new labor and delivery unit based at Dignity’s St. Francis Memorial Hospital, which would be staffed by non-UCSF obstetricians. That would let Dignity absorb more patients with low-risk pregnancies, leaving UCSF time and space to deal with more complex cases, said Dr. Dana Gossett, a UCSF obstetrician-gynecologist who has been part of the negotiations with Dignity.

“I feel a little like women’s health has been portrayed as a casualty of this negotiating,” said Gossett. “But as someone who works in labor and delivery and is in the trenches every day, I see it differently. I see the damages our capacity problems have on women right now because we haven’t expanded our capacity enough to meet the need.”

Of particular concern to opponents of the affiliation are two recent lawsuits against Dignity filed by the American Civil Liberties Union. In one case, a woman was denied a tubal ligation following a cesarean section delivery at a Dignity facility in Redding, Calif. In another, a transgender man was denied a hysterectomy after a Dignity facility in Sacramento learned the procedure was part of his plan to align his gender identity and body.

In March, Steinauer, the head of the Bixby Center, joined more than 1,500 UCSF faculty members, residents, students and alumni in signing a letter opposing the affiliation. “Our affiliation with [Dignity] not only compromises the safety and quality of our patient care, but also threatens the integrity of our reputation as a provider of evidence-based care in an inclusive environment free of bias and discrimination,” they wrote.

UCSF is hardly the first public hospital to wrestle with the question of Catholic health care.

Catholic hospital systems now oversee 1 in 6 acute care hospital beds in the U.S., according to MergerWatch, a nonprofit group that tracks hospital consolidation. And the number of hospitals that are Catholic-owned or -affiliated increased by 22% from 2001 to 2016.

Earlier this year, Dignity Health joined forces with another system called Catholic Health Initiatives in a merger approved by both the California Department of Justice and the Vatican. The resulting $29 billion system, CommonSpirit Health, has 119 acute care hospitals and is now the largest nonprofit hospital system in the country, according to MergerWatch. 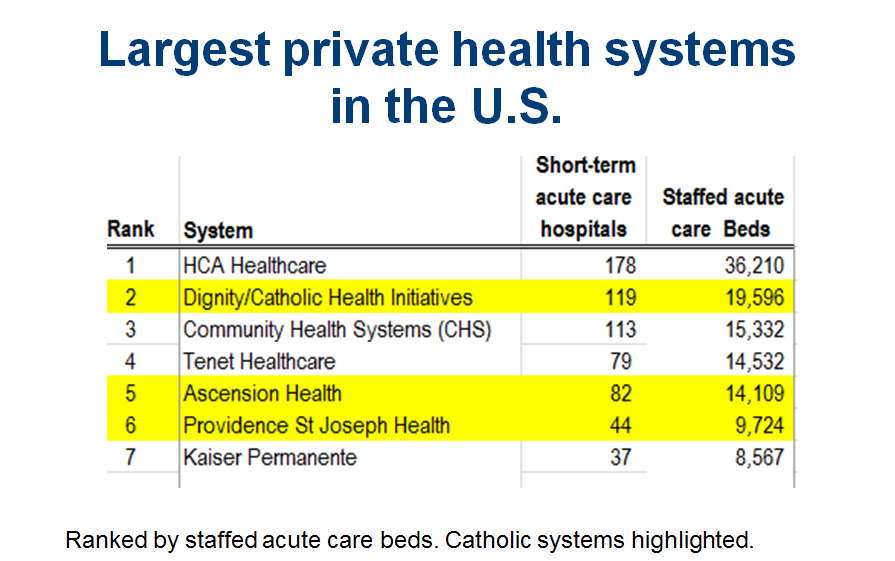 As health systems across the country scramble to merge and affiliate to gain market share, Catholic health systems have become an appealing partner for some secular hospitals, even when values diverge. In a highly consolidated region like Northern California, partnership options are limited.

Entanglements between secular and Catholic hospitals have presented problems, said Lois Uttley, who runs MergerWatch. During a trial affiliation between secular Sierra Vista Regional Health Center and the Catholic Carondelet Health Network, both in Arizona, obstetricians initially were told they could perform tubal ligations, only to be told later they needed to stop. The partnership was dissolved.

The UCSF administration said a formal affiliation is necessary to expand services and increase revenue. Dignity is already an important part of UCSF’s Canopy Health, a network of doctors and hospitals that can earn bonuses for delivering medical care more efficiently under a program created by the Affordable Care Act. Canopy Health aims to provide care for upwards of 200,000 patients within a few years.

The details of the arrangement are being worked out, but under discussion is the possibility that UCSF will get a financial stake in the affiliated Dignity hospitals, according to UCSF administrators.

The arrangement would provide “a revenue flow to support some of our money-losing programs,” UCSF’s Laret told the UC Regents this month. “There really is not a good alternative from our standpoint,” he added. “If we have to disengage from our partnership with Dignity, forget UCSF, I think that it’s catastrophic for the health care delivery system in San Francisco.”

Dignity, meanwhile, would benefit from the inflow of patients at hospitals that often operate under capacity.

UCSF has promised workarounds to avoid potential conflicts where Dignity’s hospitals prohibit services. Patients would be informed upfront about which services are not provided at Dignity facilities, for example, so they could choose to go to their preferred hospital. No UCSF staff would be asked to provide obstetric or reproductive services at Catholic facilities. And if patients at a Dignity hospital needed a prohibited service, they could be transferred to UCSF.

In an emailed statement, Dr. Todd Strumwasser, a Dignity Health senior vice president, wrote that “physicians practicing at Dignity Health hospitals may discuss all treatment options with patients” and “facilitate access” to another site when a Dignity hospital does not provide a certain service. “In a situation in which a pregnant woman’s life is in danger, life-saving procedures that may result in termination of the pregnancy will be performed.”

“We don’t know what the future really looks like,” Freedman said. “Sometimes workarounds don’t stick around.”

Will Ties To A Catholic Hospital System Tie Doctors’ Hands?