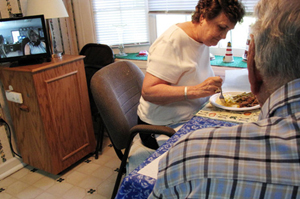 Edward and Lavinia Fitzgerald in Savannah, Ga., have dinner while telecaregiver Denise Cady of ResCare, a camera monitoring service, looks on. (Jennifer Ludden/NPR)

Part three in a four-part series

The boomer generation that has grown up with e-mail, cell phones and video cameras is now using all of these things to help care for their aging parents. That’s leading to some odd dinnertime scenes, like the one that plays out every evening in the ranch house of Edward and Lavinia Fitzgerald in Savannah, Ga.

They settle at their small kitchen table as their daughter Colleen Henry dishes out the homemade meat loaf, mashed potatoes and green beans that she has brought over. Edward’s health is failing now that he’s 83, and his wife suffered brain damage from a stroke.

“Here’s your ketchup,” Colleen says, as she puts the bottle on the table along with the salt shaker.

It could be dinnertime anywhere, but for one thing: There’s an extra guest at this meal.

“How’s the weather down there?”

That voice comes from a woman who appears on a computer monitor next to the kitchen table.

Actually, Denise Cady is what’s called a “telecaregiver,” and for two years she has been checking on the Fitzgeralds every evening from Lafayette, Ind. She joins in the mealtime chatter just like a friend who dropped by. Cady asks about the Fitzgeralds’ family and neighbors, swaps jokes about the hot weather and chats with Colleen about the meal.

More From The NPR Series

The scene may not seem so strange in the era of Skype, when many people use the computer to keep in touch with far-flung relatives. But Cady can see almost every move the Fitzgeralds make. Their house is wired with video cameras, like something out of a sci-fi movie, though, at first, you don’t notice it.

Edward points out a camera in the kitchen ceiling. It’s enclosed in a dark-tinted bubble, but you can hear it swivel when it turns to scan the adjoining living room and dining room.

Another camera monitors who enters the front door. It can pan down a hall to show who goes into the bedroom and bathroom, though it can’t see into those rooms. Colleen admits that the idea of video monitoring made her wary at first.

In addition to camera monitoring, companies offer other kinds of services to help keep track of an elderly person’s daily activities.

Some use motion sensors to monitor someone’s movement around the house, and daily tasks like preparing coffee. If a sensor detects that, say, Grandpa has been in the bathroom too long, a relative can be notified by cell phone or text. Companies that specialize in this kind of monitoring — such as SimplyHome, QuietCare and BeClose — provide detailed activity information for loved ones to see on a private website.

Medical alert services like LifeStation and ActiveCare offer emergency help at the push of a button. A similar service offered by Philips Lifeline can also detect falls, instead of relying on the user to push the button.

Still other services like MedMinder and Philips Lifeline’s ManageMyPills offer reminders to take medication or, in the case of FineThanx, provide automated daily check-in calls and will alert others when there’s no answer.

“I was thinking all sorts of things,” she says with a laugh. “My dad sitting around in his underwear. My mother – I just thought these people are going to see everything, you know. And it bothered me.”

But after her mom broke her ankle two years ago, Colleen became overwhelmed with the duties of caring for her aging parents. And she worried constantly when she wasn’t with them. What if her dad had a heart attack? What if her mom had another stroke?

“The burden’s on me if something happened,” she says.

Desperate for help, Colleen discovered a new video monitoring service and signed them up. It has turned out to be a huge relief for her dad, as well.

As with many elderly spouses, his wife’s condition had thrown Edward into the exhausting role of full-time caregiver. Now, with the cameras on, he gets out of the house for daily mass and a gab session with his buddies at McDonald’s.

“We go down there and sit around and talk,” he says. “That telephone will ring, and I’m home in five minutes.”

Cady or another telecaregiver calls Edward’s cell phone if they worry that Lavinia is staying in the bathroom a bit too long. They’ve called a couple of times when she had fallen and couldn’t get back up. They also alert Colleen and even call in the middle of the night if something seems wrong.

“They’re diligent,” Edward says. “They’re on the ball. And I like it.”

But what about this hi-tech invasion of Edward’s privacy? He says he has no problem with it. He worries more about strangers coming into the house. A home health aide does come to get his wife bathed and dressed every day, and Colleen is grateful the cameras can monitor the quality of that care.

The company that’s monitoring the Fitzgerald house is called ResCare. At its offices in Lafayette, Ind., telecaregiver Cady sits before two large computer screens. On one, you can see the Fitzgeralds in Savannah, eating their dinner as Cady chats with them.

There are also thumbnail video images of two-dozen other homes, which Cady will check in with over the course of her shift. If one client signals for help, that image pops up larger. Children of her clients can log into the same video Cady watches and monitor their parents themselves.

This long-distance care isn’t cheap. ResCare’s services start at $600 a month and can run well over $1,000 depending on how much active monitoring is needed. But that’s still a lot less than the average nursing home.

“Primarily the people using this at this time are in the beginning stages of Alzheimer’s or dementia,” says Nel Taylor of ResCare.

She says a telecaregiver can remind people to take their medication at a certain time. They can alert a relative if someone appears confused or in distress. They can help with the simple tasks of daily life, like the time a client was about to sit down to breakfast.

“The telecaregiver zoomed in on the frying pan and said, ‘Maybe you ought to cook the sausage and the eggs a little longer. The eggs look kind of runny and the sausage is pink,’ ” Taylor says.

No doubt, starring in your own daily reality show won’t appeal to everyone. But there are all kinds of remote monitoring systems popping up to keep tabs on a fast-aging population. Most use sensors placed around the house and alert children to every mundane detail of their parents’ day: when they get in and out of bed, sit on the sofa, open the refrigerator door or turn on the air conditioning. ResCare’s Taylor says all of the research and startup companies are driven by this simple equation.

“At the same time that we have this huge population of aging folks, we have a shrinking population of caregivers, of younger people able to provide the care that these older people are going to need,” she says. “If we don’t find other ways [to do that], then we are really going to be in big trouble in the future.”

Back in Savannah, Colleen scoops out some extra banana pudding for her parents as she chats with Cady on the monitor.

“I was going to leave the whole dish, but I thought better of it,” Colleen says.

Cady laughs. “It would be gone by tomorrow morning, I’m telling ya!”

Colleen says she assumed video monitoring would help keep her parents healthy and at home. But she had no idea it would also provide her parents with a new friend.

“You see how old people are just lonely,” she says. “This makes Momma and Daddy happy.”

And Colleen admits that it relieves her own guilt at not being around even more.

As her parents keep talking with Cady, Colleen packs up the dishes, shouts out a goodbye and heads for the door. She leaves her parents for the night, reassured that they’re not really alone.