The hard-fought campaign for an open Senate seat in Wisconsin—a centrist state that recently has become politically torn—has delved deeply into the politics of health policy and Medicare.

The two Senate nominees bring to the contest an unusual level of health-care expertise, helping focus the issue in the Badger State more than has been the case in other states. Voters’ responses ultimately may help to point the way to middle ground on policy changes, say pollsters and others who have studied the race. 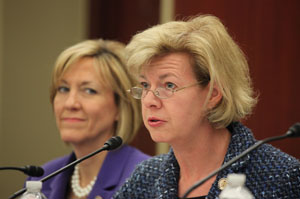 Democratic Rep. Tammy Baldwin has been an outspoken liberal during her 14 years in the House and is a veteran member of the Energy and Commerce Committee, where she promoted a Canadian-style, single-payer health care financing system.

She wrote during the 2009 congressional health care debate that including a public insurance option “will make health care affordable by increasing competition, providing more choices and keeping the insurance companies honest.”

Republican Tommy Thompson was an innovative governor for 14 years before he became President George W. Bush’s Secretary of Health and Human Services. He was instrumental in the 2003 enactment of Medicare prescription-drug coverage. During the 2009 congressional health care debate he urged a bipartisan effort to “address the health care crises” in an article he wrote with former House Democratic Leader Richard Gephardt of Missouri.

Neither Baldwin nor Thompson got their way when President Barack Obama in 2010 signed the Affordable Care Act. And in some ways, their current contest to replace retiring Democratic Sen. Herb Kohl has revived that harsh partisan conflict over health care and the 2010 congressional campaign—which resulted in major Democratic setbacks, including the defeat of Wisconsin’s long-time progressive senator Russ Feingold. Thompson blasts Baldwin for supporting a “government takeover of Medicare” and she and her allies have blistered him for his support for changes to Medicare.

Those conventional partisan dynamics are highlighted in broadcast ads by the candidates’ allies this month. 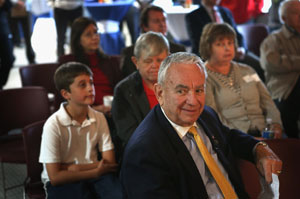 “Tommy [Thompson] says he’s the best person to do away with Medicare and turn it into a costly voucher program,” according to a spot aired by the American Federation of State, County and Municipal Employees.

Crossroads GPS, which was organized by Republican strategist Karl Rove, has run an ad that attacked Baldwin for having “pushed an extreme takeover of your health care. It would go beyond Obamacare to create a government controlled health system.”

The campaign — in a state with historically deep pockets of  progressive and conservative legacies — has taken shape in the shadows of two other key political developments: A costly recall election earlier this year in which liberals and national labor groups sought unsuccessfully to remove Republican Gov. Scott Walker and local GOP Rep. Paul Ryan’s rise as the leading advocate of conservative views on health and retirement issues and his selection as presidential nominee Mitt Romney’s running mate.

Ryan, 42, has described himself and the often confrontational Walker, 44, as “protégés of the Tommy Thompson farm team,” but the 70-year-old Thompson has sought to distance himself from their policy embrace on broad social issues. Although he has called for overturning the health law and has endorsed the concept promoted by Ryan to give seniors premium supports to buy health coverage in order to keep the system from running out of money, Thompson also has said he would want significant revisions in that plan, such as increased federal payments and an expanded pool for high-risk patients.

“I am here to save Medicare, Medicaid and Social Security, but you have to make some adjustments,” he told the Milwaukee Press Club this month.

Baldwin has been a fierce advocate for keeping the health law and for preserving Medicare’s current structure.

A Marquette University Law School poll released Wednesday found that the race was dead even.

Yet despite the divisive campaign, a poll early this month by the school shows movement among voters in two ways that suggests the public may be beginning to break away from the health care polarization of the two parties and may be more accepting of change:

–Respondents split 46 percent to 45 percent on whether they approve or disapprove of the Affordable Care Act. When the survey in May asked how the Supreme Court should rule on the law’s constitutionality, 33 percent said that they wanted to keep the law, and 57 percent said that it should be overturned—in whole, or in part.

–65 percent of respondents said that they want Medicare to “continue as it is today, with the government guaranteeing seniors health insurance and making sure that everyone gets the same defined set of benefits.”But the next question in that poll revealed that 51 percent said that “major changes will be required because the current system is too expensive to continue as it is,” and only 45 percent said that Washington can “find ways to continue to support the current Medicare system.”

“The negative stereotype is that people want to have their cake and eat it too,” said Charles Franklin, the poll director. “But they are aware of the difficulties of paying for the system. This results in a tension for people who support the current system, but see it as hard to finance…. 20 to 25 percent want current Medicare, but say major change is required.”

Similar trends have been evident in recent national polling on health-policy issues, including a September survey by The Kaiser Family Foundation, which found “malleable” public support for sweeping Medicare change. More than a quarter of the respondents wanted to keep Medicare the same and 37 percent favored change. But another 25 percent switched from wanting to keep the current system after being told that change in the system “is needed to sustain Medicare for future generations.” (KHN is an editorially independent part of the foundation.)

Those tensions are reflected in Wisconsin’s Senate contest, according to Ted Marmor, a Yale University political science professor emeritus and scholar on the modern welfare state.

“With Baldwin versus Thompson, you have a moderation of those choices” compared to the national debates on health and Medicare, Marmor said in an interview. “Thompson won’t say that he’s for vouchers to pay for Medicare because he knows that Baldwin would attack him for that. Nor will Baldwin be as bold as Vice President Joe Biden [in the Oct 11 vice-presidential debate] in rejecting solutions to Medicare….This means that the broader public debate is becoming less idiotic.”

Candidates in other high-profile Senate contests, by contrast, have handled these issues with the equivalent of sound bites.

Marmor added that he was heartened by the muted attacks in the presidential campaign. “The clarity of the differences between Democrats and Republicans has been blurred in the past weeks,” he said.