It was July 30th when Atlanta’s Emory University Hospital got the first call. An American doctor who’d been treating Ebola in Liberia was now, himself, terribly sick with the virus. In just 72 hours, Dr. Kent Brantly came through Emory’s doors. Then, almost immediately, the staff learned a second Ebola patient was on the way. Dr. Jay Varkey’s first thought was, “What do we need today, in order to care for these patients tomorrow?”

In the three months since, Emory has treated four Ebola patients. All survived. Dallas nurse Amber Vinson spent more than a week at a special treatment unit at Emory before being discharged in good health and good spirits Tuesday. 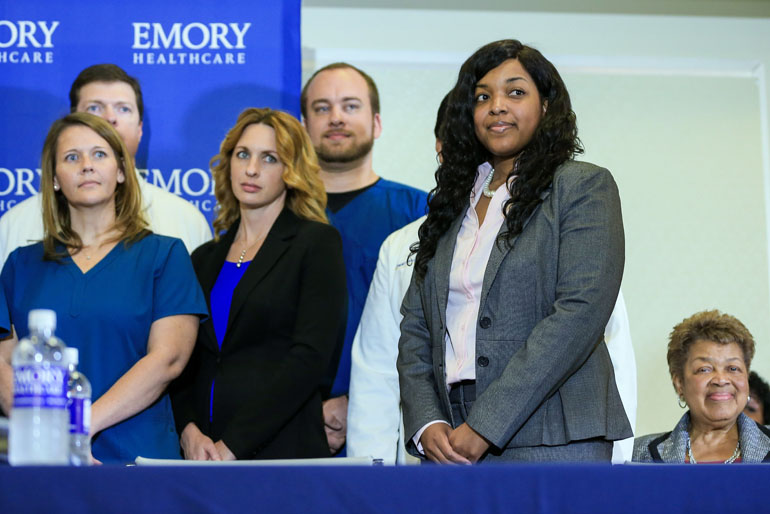 Amber Vinson (2nd R), a Texas nurse who contracted Ebola after treating an infected patient, stands with her nursing team during a press conference after being released from care at Emory University Hospital on August 1, 2014 in Atlanta, Georgia. (Photo by Daniel Shirey/Getty Images)

“The general dogma in our industry in July was that if patients got so ill they required dialysis or ventilator support, there was no purpose in doing those interventions because they would invariably die,” Dr. Bruce Ribner, who heads Emory’s Ebola team, told reporters at a hospital press conference Tuesday.

But in this case, Emory proved otherwise, he said — aggressively treating the illness can be effective.

Emory’s plan to treat patients who have diseases like Ebola actually began 12 years ago. That’s when the Atlanta-based Centers for Disease Control and Prevention started working with the hospital to create a special isolation unit.

Since then, Varkey says, a core team of health workers has trained yearly. They’ve held practice drills every six months to stay sharp, ready for whatever infectious disease comes their way. Once, in 2005, the unit was used for a suspected SARS case that turned out to be negative.

But in July, with two patients on the way, it quickly became clear that Emory’s specially-trained team was too small, says Nancy Feistritzer, the hospital’s chief of nursing.

Critical care nurses volunteered to help fill in the gaps, but weren’t part of the core group that had long practiced for this day. The expanded team had to quickly train — and not everybody made the cut.

Once the team was in place, they focused on supportive care of these patients — administering IV fluids and preventing infections.

“The true cure for Ebola virus is keeping the patient alive long enough to develop the antibodies that will cause them to get over the infection,” Varkey says.

Emory learned lessons, big and small, from each patient, he says.

For example, just increasing the amount of working space around a patient sick with Ebola helped a lot, he says. So does “having a hand sanitizer dispenser available, [one] that wouldn’t require us to actually touch it with a gloved hand.”

In Emory’s experience, nurses on the Ebola unit who started out on 8-hour shifts preferred 12-hour rotations instead. And caring for the emotional health of patients in isolation is as important as promoting physical well-being, the staff learned.

“Every morning the team meets to discuss what worked well, what might be refined,” Feistritzer says, looking for lessons that might be put into practice the next shift, or the next day.

The Emory team doesn’t claim to have all the right answers, Varkey says. But what they do know, they’re sharing.

“Our entire 84-page document, in terms of our protocols,” he says, “is now available to any person who wants to access that on the web.”

Those protocols went live a week ago. So far, more than 11,300 people have registered to get access to them.