California’s Medi-Cal program has grown to cover nearly half of the state’s children, causing policymakers and child advocates to question the ability of the taxpayer-funded program to adequately serve so many poor kids.

In the past two years alone, the program has added nearly 1 million young people up to age 20,  including those newly eligible for Medi-Cal coverage under the Affordable Care Act. The increase brings the total number of young people on Medi-Cal to 5.2 million, more than ever before.

Medi-Cal is California’s version of Medicaid and the largest program of its kind in the nation. 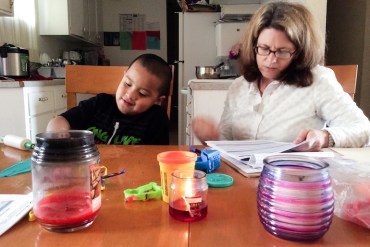 Many pediatricians and specialists already refuse to accept new Medi-Cal patients, at least in part because the program offers among the lowest payment rates in the country. New rate cuts took effect this January. Health care advocates say adding more children to the mix will only worsen the likelihood of timely treatment.

Evidence is emerging that the public insurance program is falling short in some key respects. According to an ongoing study led by Ninez Ponce at UCLA and funded by the California Healthcare Foundation, children on Medi-Cal were five times more likely than kids on private plans to have visited the emergency department for asthma care because they couldn’t see their own doctor.

And according to a state report based on 2013 data, more than two-thirds of California’s Medicaid managed care plans performed below the national average for Medicaid plans in ensuring that children had required immunizations by age 2.

Advocates and some policymakers say the state has downplayed problems with children’s care and not provided adequate data to help evaluate and improve services. They say officials have traditionally paid more attention to Medi-Cal’s more costly adult population.

“When you have half of all of California’s children in Medi-Cal, it’s essential that the state keeps its promises to children that they can get access to the care that they need. This is our future,” said state Sen. Richard Pan, D- Sacramento, a pediatrician who has been pushing the agency to provide better data on children’s care.

State officials say they are working to improve access to care for children but do not see widespread problems or a need to raise reimbursement rates.

“At this time, we feel the rates are sufficient,” said Anastasia Dodson, associate director of policy at the California Department of Health Care Services, which oversees Medi-Cal.

Over the past two years, Medi-Cal absorbed about 750,000 children when California eliminated its Healthy Families child health insurance program, which was aimed at working families with higher incomes than the Medi-Cal population.  An additional 232,000 children joined with the expansion of Medi-Cal under the Affordable Care Act, according to a spokesman for the health care services department.

Nearly all of these children are enrolled in managed care plans, which pay a fixed monthly rate per patient in an effort to save money and streamline care.  Most families pay small monthly premiums for each child depending on income.

The transition from Healthy Families, which generally paid higher rates to doctors,  saved  about $39 million in the 2013-2014 budget year, said Dodson, less than the agency’s initial estimate of $52 million. (Overall, the Medi-Cal budget is projected to be $95.4 billion in 2015-2016.)

The transition went smoothly for many families, but had its share of serious challenges.

Some children lost access to critical services, such as autism behavioral therapies, that had been previously covered by Healthy Families. The autism services were eventually restored, but advocates faulted the Department of Health Care Services for being slow to react, and families are still dealing with the fallout of trying to regain services for their children.

Glaiza Santiago of San Jose lost autism therapy for her 6-year-old son, Ernesto, for about a year after her children were transferred from Healthy Families to Medi-Cal. Only after filing complaints with her managed care plan, Santa Clara Family Health Plan, and the Department of Health Care Services was she able to get Ernesto reevaluated so that his therapy could resume.

“It’s just been a battle to get him therapy and the other things that he needs,” said Santiago, who has two other young children and is studying to become a medical assistant. “I felt so helpless…I never realized it would be that hard. I never had problems before.”

Diana Vega, an elementary school teacher in San Pablo, has mixed feelings about her three children’s experience with Medi-Cal managed care. She appreciates that her premiums to participate in the program have declined by about 25 percent since switching from Healthy Families; her kids also were able to keep their pediatrician.

Like Santiago, she had trouble restoring therapy services for her son, diagnosed with autism and Prader-Willi syndrome, a genetic condition that weakens muscles. But she also was taken aback by how much more difficult it was to get eyeglasses and dental care.

After waiting nearly eight months for an appointment with a dentist who would accept her children’s Denti-Cal insurance, Vega said, the dentist said the insurance would not pay for him to fill a small cavity in her daughter’s mouth because it wasn’t yet “visible to the eye.” So Vega purchased a separate dental insurance policy for her children and abandoned Denti-Cal.

Medi-Cal’s dental services have drawn particular criticism, including a state audit released in December that found that dental services had been provided to less than half of the program’s children, mostly because so few dentists were willing to accept the low reimbursement rates.

Dodson of the health care services department said that families can call a telephone service center (800-322-6384) when they are having problems finding a dentist or a timely appointment with any provider, and the state is working to recruit new dentists willing to accept new Denti-Cal patients.

Dodson said her agency regularly monitors the networks of Medi-Cal managed care plans to ensure there are enough doctors to care for patients and that she has not heard of widespread problems for children who need specialty care.  Efforts are underway statewide to increase the number of doctors willing to accept Medi-Cal patients, particularly in Riverside and San Bernardino counties, where the Inland Empire Health Plan is offering physicians bonuses of up to $100,000 to treat its members.

The agency also is working with a new committee of experts, the Medi-Cal Children’s Health Advisory Panel, to develop better pediatric data that will help identify any gaps in care, she said.

At the panel’s first meeting in January, Sen. Pan, who pushed legislation to create the panel – against the Department of Health Care Services’ wishes – cast the stakes for the committee’s work in stark terms:

“When you’re covering half of California’s children, it’s hardly ‘those kids’ anymore,” he said. “It’s all our kids.'”

With Half of California’s Kids On Medicaid, Advocates Worry About Service