Next year, the military will officially lift restrictions on women in combat, the end of a process that may open up as many as 245,000 jobs that have been off limits to women. But women who deploy overseas may continue to face obstacles in another area that can have a critical impact on their military experience: contraception.

It’s not a minor issue. Rates of unintended pregnancy among women in the military are 50 percent higher than those of women in the general population. And because of strict federal rules, their insurance does not generally cover abortion.

Tricare, the health care plan for more than 9 million active and retired members of the military, covers most contraceptive methods approved by the Food and Drug Administration. Active-duty service members pay nothing out of pocket. Spouses and dependents of service members may face copayments in some instances. 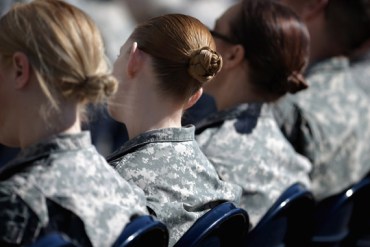 But all methods aren’t necessarily available at every military hospital and clinic, and overseas, for example, women may have difficulty getting refills of their specific type of birth control pill.

Nancy Duff Campbell, co-president of the National Women’s Law Center, says, “It is unfortunate that here we have the military, that has one of the best health care systems in the country, and where we still have a gap is in contraception.”

Fifteen percent of active duty service members are women, and 97 percent of them are of childbearing age.

In a 2013 study, based on more than 28,000 responses to the 2008 Department of Defense health-related behaviors survey, researchers found that after adjusting for the larger concentration of young women in the military, the rate of unintended pregnancy among military women was 7.8 percent, compared with 5.2 percent among women in the general population.

“It’s critically important to address unintended pregnancy in the military, because it can be particularly damaging to women’s careers, and it’s hard to access abortion care,” says Dr. Daniel Grossman, a study co-author who is vice president for research at Ibis Reproductive Health, a research and advocacy group.

Abortion is available at a military facility or covered by military health care only if a woman’s life is in danger or if the pregnancy is a result of incest or rape. Women who want an abortion in other circumstances must use a non-military health care provider and pay for the procedure out of pocket, according to Department of Defense health officials.

Coverage for emergency contraception, meanwhile, has recently been expanded to all active duty service women and female beneficiaries without cost sharing.

It can be challenging to use contraceptives while deployed overseas for many reasons. There is the problem of trying to schedule a daily birth control pill when traveling across time zones, and desert conditions may make a contraceptive patch fall off. Although women are allowed a 180-day supply of contraceptives before deploying, obtaining refills of the same pill is sometimes difficult, some women reported in a 2012 study published in Contraception about access to contraception during deployment that was based on survey of 281 servicewomen.

Women also reported that they were told that contraceptives were unnecessary because having sex during deployment was forbidden or that they couldn’t receive an intrauterine device because they hadn’t yet given birth. Neither of those claims is true.

The majority of women surveyed also noted that they weren’t counseled about using contraception for either pregnancy prevention or menstrual suppression before deploying.

Pre-deployment counseling that specifically addresses women’s contraceptive needs could help counter confusion and ensure women have access to birth control methods that meet their needs. According to military health system officials, contraceptive and reproductive counseling is a covered benefit under Tricare and is an expected component of good clinical practice.

The House and Senate versions of the Pentagon’s spending bill for the fiscal year that begins in October contain measures that would affect contraception coverage in the military. The Senate version of the bill would guarantee family planning education and counseling, while the House version would make available a broad range of FDA-approved contraceptives at military treatment facilities and ensure that women servicemembers have enough contraceptives to last for the duration of their deployment. A congressional conference committee is working to write a compromise between those two bills.

Defense Department officials said they had no comment on the pending legislation.

Women In Combat Zones Can Face Difficulty Getting Some Contraceptives