On Tuesday H.R. 2, the Republican-backed bill to repeal the 2010 health care overhaul law, came to the House Floor.  The bill is not expected to come to a vote in the Senate, so this week’s House debate is likely to be remembered as purely symbolic.  With members speaking more to the C-SPAN cameras than to each other, the words they choose take on extra significance.

View video excerpts of the debate.

The “word clouds” below show the most-frequently used words chosen by Republican and Democratic members, respectively, during Tuesday’s floor debate.  Common words, the phrase “health care,” and legislative niceties such as “Mr. Speaker, I yield my time” were excluded to clarify the partisan differences.

The combined remarks of Republican members: 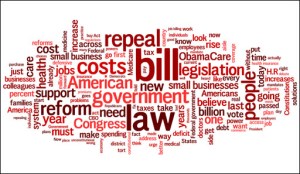 The combined remarks of Democratic members: 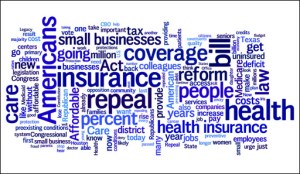