There’s a ruckus in the waiting room — a patient is shouting at a weary receptionist. Nurse practitioner Douglas Reed is there in minutes, placing a hand on the man’s shoulder and speaking calmly until the patient sits down in a chair.

“He’s just tired,” Reed said, returning to his office at the clinic for homeless and low-income people run by Pathways to Housing and Unity Health Care, tucked between row houses near the New York Avenue Metro station in Washington. 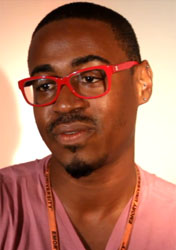 As the main primary care clinician, Reed is accustomed to daily challenges. His background has prepared him for this work — and not just the advanced nursing degree from Howard.

“We hired Doug also for his lived experience,” said Christine Elwell, Director of Outreach at Pathways.

Reed, 30, grew up the oldest of seven children in what is now called the Atlas District, a neighborhood in northeast D.C. He and his siblings were raised by his grandmother and aunt because his mother struggled with drug addiction and his father was often homeless, or as Reed calls him, “a nomad.”

When he would go to other, wealthier parts of the city, Reed remembers noting the absence of crime, drugs and prostitution that plagued the streets near his home.

But Reed also remembers a happy childhood, not overshadowed by his parents’ struggles, or the family’s reliance on government aid for food and health care. Reed said he feels lucky when comparing his own path to that of the patients he sees at the clinic.

“They’ve been through so much, and all I had to do was, what, study?” he said.

His father’s situation taught him how easy it is for someone to lose control of his life and end up on the street, like many of his clients who suffer from severe mental illness.

This perspective, he said, makes it easier for him to empathize with his patients.

He tears up as he tells the story of the patient who wrote a “prescription” for him when Reed was feeling sick at the office, scrawled with the words: “A teaspoon of Tussin.” The note is now taped to his refrigerator as a reminder of what drew him into this work.

“He cared that much,” Reed said. “I think my patients value my compassion, but we’re all very interdependent on each other.”

Nurse Practitioner’s Life Story Prepares Him To Work With Homeless