A new Medicare overhaul plan touted as a serious bipartisan approach was unveiled today, but it leaves out key details about how it would avoid raising seniors’ premiums. 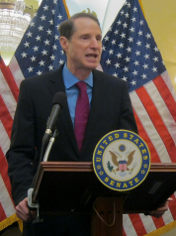 Democratic Sen. Ron Wyden is teaming up with Republican Rep. Paul Ryan on a Medicare overhaul plan that would give beneficiaries a fixed amount to use toward buying private coverage or to pay for a traditional fee-for-service plan. Under the proposal, if Medicare spending rises beyond a certain level, and Congress does not intercede, seniors would pay more.

The effort is the latest attempt to curb spending in the giant entitlement program, which is growing faster than general inflation. The bipartisan plan could also play a role in the current campaign and might hurt Democrats’ ability to campaign against Republicans on Medicare.

The key to the plan’s success is getting Congress to step in and make changes to Medicare if spending exceeded Gross Domestic Product plus 1 percent after 2020, the two lawmakers said this morning at the event sponsored by the Bipartisan Policy Center. That could mean anything from attacking fraud and abuse in the system to cutting payments to medical providers to giving less help to wealthier seniors, they said.

The two said they were sure Congress would act to avoid increased premium costs across the board. “There is no greater incentive for members of Congress to step in and fix it before [seniors are hit] with a premium hike,” said Wyden. “The alternative is to put the government on auto pilot and stick it to seniors. This puts the burden where it ought to be, on Congress.”

Wyden, from Oregon, and Ryan, from Wisconsin, didn’t address the prospect of failure of Congress to act, even though Congress has not met with success in recent super committee deficit reduction negotiations and is now again facing the prospect of a federal government shutdown.

Congress has ignored past triggers.  The 2003 Medicare Modernization Act that created the prescription drug benefit, for example, included a trigger mechanism. If Medicare’s trustees projected in two successive years that at some point in the following seven years general revenues must be tapped to pay at least 45 percent of total Medicare costs, the president would have to submit “corrective” legislation to Congress in the next budget. Although the trigger was hit more than once, Congress ignored it.

Wyden said that the new plan should appeal to progressives and conservatives. But some Democrats disagreed. Rep. Pete Stark, D-Calif., a liberal, said the proposal “ends Medicare as we know it, plain and simple. If these two get their way, senior citizens’ health coverage will depend on what big insurance offers and what seniors — most of them on modest, fixed incomes — can afford. That combination will jeopardize health and economic security for seniors.”

Wyden and Ryan today joked about their partisan differences, although there were hints of tensions to come when addressing any changes to Medicare. Wyden wants the health care law to remain, while Ryan is looking for repeal. When Wyden said that traditional Medicare “acts like a public option,” Ryan interjected, “Try not to use those words.”

Wyden said he was “not oblivious to the politics” of the current campaign season and that the two wouldn’t create a detailed legislative plan until after the fall’s presidential election to “lower the decibel of the [Medicare] discussion.”

Their “premium support” proposal would begin in 2022. Private insurers would compete against traditional Medicare on an exchange, and a yearly bidding process would determine how much money Medicare would spend on each beneficiary.

The cost of the second-least expensive plan, or what fee-for-service Medicare costs — whichever is cheaper — would be the amount provided by the government to beneficiaries, with those payments being adjusted for risk and geography. Seniors who chose more expensive plans would pay more out-of-pocket for coverage, and those who picked plans that cost less than the benchmark amount would get a rebate.  Private plans would be required to provide at least the same level of benefits as traditional Medicare. The proposal, which isn’t expected to gain any traction on Capitol Hill in the midst of a heavy campaign season, would cap how much seniors would pay out of pocket for their care –  traditional Medicare doesn’t have that now.

Ryan unveiled a Medicare plan earlier this year that would have eliminated fee-for-service as an option as of 2022  and would have required seniors to pay more for their coverage.   A Congressional Budget Office analysis projected that under Ryan’s Medicare plan, by 2030 a typical 65-year old would be required to pay 68 percent of the total cost of his or her Medicare-covered services. That compares with the 25 percent they would pay under current law. Democrats pounced on the Ryan proposal, saying that Republicans wanted to fundamentally change the nature of the entitlement program that provides coverage to 48 million elderly and disabled Americans.

While Wyden is known for reaching across the aisle to craft a compromise – he co-sponsored health overhaul legislation with former Sen. Bob Bennett, R-Utah, in 2007 and 2009 – some Democrats are scratching their heads over why Wyden would team up now with Ryan over the politically sensitive topic of Medicare.

“Why in the world he agreed to help Ryan get out of the rock he was under is beyond me,” said a former senior Senate Democratic aide who asked not to be named due to the sensitivity of the issue.  “This is a bad move on a couple different levels, and has the potential to take away a key argument for Democrats that are trying to retake the House.”