MINNEAPOLIS, Minn. — Robert Bauer is young, lean and healthy – just the kind of person the government wants to buy into its new online health insurance marketplaces.

Bauer doesn’t see the need. The 24 year old, a 2011 graduate of the University of Minnesota, works in organic farm fields three days a week, and prides himself on eating well. He’s uninsured – health covereage just hasn’t been part of his lifestyle. 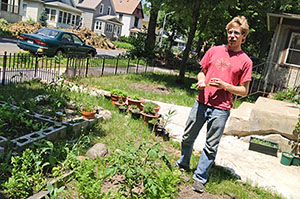 Robert Bauer, 24, shows off the small garden he tends in front of his house in Minneapolis (Photo by Elizabeth Stawicki/MPR)

“I just don’t think it’s worth the money for me to get health insurance at this point,” he said.

He hopes that if he got seriously ill or had an accident his family would have the resources to help or “maybe I’d just lose my life,and that would be OK, just so other people wouldn’t have to live the rest of their lives in poverty or bankruptcy.”

While Bauer generally doesn’t fear a health crisis, the people building insurance exchanges worry about Bauer and the millions of other healthy Americans whom they fear may simply opt out. The marketplaces are a key part of federal Affordable Care Act, also known as Obamacare. Younger, low-risk people are needed to offset the costs of covering older, sicker Americans.

“It’s important for everybody to participate all of the time and to pay an average amount in premiums so that when something happens to one of us — we have a baby, we get cancer… that will require thousands of dollars of care, the money is there in the pool,” said Karen Pollitz of the nonpartisan Kaiser Family Foundation and a former Obama administration official. (Kaiser Health News is an editorially independent program of the foundation.)

The law requires Americans obtain health insurance or pay a penalty beginning in 2014. But some young people might just pay the penalty, which in the first year isn’t much, the greater of $95 or 1 percent of income. The fee rises to $695 or 2.5 percent in 2016. While the ACA allows children to stay on their parents’ policy until age 26, that doesn’t help young people such as Bauer, because his mother is uninsured and his father is on disability. And, Pollitz notes, younger people are “systematically uninsured.”

“We boot them off,” Pollitz said. “We kick them out of Medicaid, (or) their parents’ health insurance coverage just when they’re starting off, just when they’re not earning much and the odds are pretty low that they’re going to get that first great new job with new benefits.”

Young people aren’t against being insured. A recent KFF poll found that about three quarters of 18-30 year olds believe having insurance is something they need and is important to have. The top reason younger people didn’t have it: too expensive. But the law does provide subsidies for people earning up to 400 percent of the federal poverty line, $46,000 for a single person or $94,000 for a family of four. And, officials and advocacy groups are searching for ways to lure younger people in.

“What really appeals to that younger age group is both affordability — they feel they just can’t afford it — and also communicating the value of insurance and how valuable it is to have that insurance and why you need,” according to April Todd-Malmlov, the executive director of MNsure, Minnesota’s online insurance marketplace. Minnesota is one of the 16 states that’s building its own exchange.

Todd-Malmlov said Minnesota will target young adults in two ways — in the social media they use, such as Twitter and Facebook, and the messages themselves.

Massachusetts found that out the value of targeted messages. The Bay State’s 2007 law requires residents to obtain health care coverage or pay a fine, just like the federal law.

Looking to reach a wider audience, the state partnered with the Boston Red Sox and its New England Sports Network to encourage residents who lacked insurance to sign up through its online insurance marketplace, the Connector, Massachusetts’ version of MNsure, which will launch Oct 1.

Fans at Fenway Park were a captive audience for ads touting the Connector on the Jumbotron or articles tucked inside game day programs. The public relations pitch stumbled at first as the public reacted poorly to TV ads featuring baseball players.

Uninsured people “didn’t want anyone who had insurance and was making a good salary to sort of lecture them. It came off as ‘you better do this,'” said Tara Murphy of the public relations firm Weber Shandwick, which devised the Massachusetts campaign.

The campaign switched gears. The Red Sox still provided the platform but the messages came instead from young people who’d suffered serious illnesses or crashes and others who were able to find affordable coverage on the state’s new marketplace. TV ads featured a young woman sitting in a green stadium seat at Fenway talking about her life following a breast cancer diagnosis.

Minnesota officials have been talking with its pro teams, including the Twins, Timberwolves, Vikings and the Lynx to encourage residents to sign up for coverage, borrowing a page from the Massachusetts playbook.

And, just yesterday, MNsure announced that Paul Bunyan and Babe the Blue Ox will be the faces of the exchange.

The state is contracting with BBDO Proximity Minneapolis for the website’s roughly $9 million marketing campaign. At the campaign’s launch Sunday, BBDO creative director Brian Kroening said he wanted the advertising to be easy to understand, local, and upbeat.

“Because this is in fact great news for those that are uninsured. We liked Paul and Babe because everybody seems to recognize them. They were easy to work with. We were looking for what was unique to Minnesota,” Kroening said.

Billboards with Bunyan and Babe’s images are going up, along with MNsure advertising on buses and in skyways and newspapers. The campaign’s motto will be “The Land of 10,000 Reasons to get Health Insurance.”

Meanwhile, Robert Bauer may get health coverage after all. Starting next week, he’ll be attending graduate school at Virginia Tech to study plant and soil science where, he says, insurance will cost him $200 a year in out of pocket costs. That’s only about $100 more than the penalty he would have to pay if he chose not to get insurance.

MPR reporter Rupa Shenoy contributed to this story, which is part of a collaboration that includes Kaiser Health News, NPR, and MPR News.