Lizzie Bunnen’s medical insurance ran out this fall. She had every intention of buying new, subsidized coverage under the health law in October. 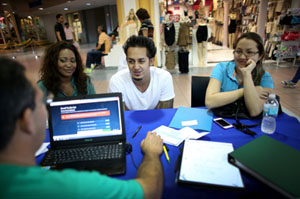 Ashante Thurston, John Riascos and Julieth Riascos speak with Mario Ricart an insurance agent with Sunshine Life and Health Advisors about purchasing insurance under the health law at a kiosk setup at the Mall of Americas on December 11 in Miami. (Photo by Joe Raedle/Getty Images)

“Then obviously I heard all the coverage about how terrible the website was,” said Bunnen, 26, a George Washington University grad student who lives in Virginia. “And I said, OK I’ll wait. And I kept waiting. And November came around and the website was still terrible. And I was going to do it over Thanksgiving.”

The success of the Affordable Care Act’s online marketplaces may depend on people like Lizzie Bunnen.

If healthy adults her age don’t sign up, the risk is that predominantly older and sicker members will drive up costs and threaten the portals’ future. With the Dec. 23 deadline approaching for January coverage, and at the end of March for all 2014 enrollment, the clock is ticking on what many believe is one of the health law’s biggest challenges.

As a result, ACA backers have stepped up efforts to persuade Bunnen and others aged 18 to their mid-30s to give Obamacare a second chance on newly improved websites such as healthcare.gov.

“Remind your friends and your peers — imagine what happens if you get sick, what happens with the massive bills” if there’s no health insurance, President Obama told a group of young people at the White House this month.

The president called on radio hosts and bartenders to publicize Obamacare. First Lady Michelle Obama wants families to talk to loved ones “about what health care reform can mean to them” over the holidays.

Young Invincibles, a healthcare consumer group, would like young adults to ask for Obamacare for a holiday gift.

Still, a poll released Dec. 4 by Harvard University’s Institute of Politics suggested the recruitment challenge is substantial. More than half of the uninsured young adults who responded disapproved of the Affordable Care Act.

Only 20 percent said they would “definitely” or “probably” sign up.

“I personally haven’t been on Covered California,” that state’s website for enrolling in the new coverage, said Jasun Boles, 32, a California construction worker. “As I’m listening to the news they’re saying, whoa, the online thing isn’t working. If you enter your personal information, it might be stolen. I’m thinking I’m just going to wait.”

Few numbers have been published on enrollees’ ages so far. California has said 21 percent of those who signed up through early December are between the ages of 18 and 34 while Kentucky reports that about 20 percent of those buying plans through late November are in the same category.

“It’s still a little bit too early to tell” how the balance will turn out, said Peter Cunningham, a senior fellow at the nonprofit Center for Studying Health System Change. “The California experience is probably better than what a lot of people expected and maybe as good as we can expect” in the first year.

If total signups meet expectations across the country, the White House figures nearly 40 percent of enrollees will be in that category. But the Department of Health and Human Services hasn’t published age breakdowns for enrollees in healthcare.gov, the troubled online marketplace it is running for 36 states.

Even though older subscribers pay substantially more in premiums and the health law contains “reinsurance” and other safety valves for plans that lose money in the early years, some believe disproportionate enrollment of older and sicker people could drive up premiums and threaten the policies’ long-term stability.

While December enrollment will probably rise with a better functioning site, “at this juncture it seems unlikely that the administration will meet its goals for young adult enrollment,” said Conor Ryan, a health data analyst with the American Action Forum, a right-leaning think tank.

New York singer and actress Gabrielle Sterbenz waited until finishing a tour of Britain and Ireland in October to enroll recently on New York’s insurance portal to replace what she called “minimal” coverage now.

After subsidies she’s paying $60 a month for a medium-level silver plan, she said.

“The New York site is great,” said Sterbenz, 36. “I’m getting full coverage. I found a plan that my voice doctor is on and my regular primary care [doctor] and my ob-gyn — and I’m paying less,” thanks to the health law’s tax credits. “I know actors and musicians who have been looking forward to Obamacare kicking in.”

New York’s online exchange has been praised along with California’s and Kentucky’s as working relatively well. As the federal portal and other troubled sites such as Maryland’s improve, the portion of younger, healthier applicants should grow, suggests Timothy Jost, a law professor and health policy specialist at Washington and Lee University.

“It seems to me that a person who really needs health insurance will spend a day trying to enroll,” Web problems or not, Jost said. “A healthy person will probably wait until he or she can enroll in 20 minutes.”

Travis Hoium, 31, a contract writer for The Motley Fool financial site was able to sign up on MNsure, Minnesota’s troubled portal. “The signup was pretty painless,” he said. “I wouldn’t say that it was anything harder than signing up for anything similar online.”

Ineligible for subsidies, he enrolled in a high-benefit gold plan for $165 a month, he said.

Even perfect software was unlikely to persuade Kerry Haack, 31, a homemaker in Lewisville, Idaho, to enroll in a plan created by the health law.

“The government’s role is not to tell people that they need to buy health insurance,” she said. “It’s a wrongheaded law, and I’m opposed to [Idaho] implementing it.”

While she lacks coverage now, her recently graduated husband expects to take a job offering a family health plan next year, which she’ll sign up for, she said.

Nor will California’s Jasun Boles probably sign up this month, he said.

Even if he gets hurt and racks up a $20,000 emergency room bill, he figures that’s affordable next to the $70,000 he already owes in student debt.

He realizes under the health law he’ll pay a penalty if he lacks coverage. (Next year it’s $95 or 1 percent of income.) But, he said, “it’s cheaper for me to pay that once rather than pay the full price of health care for the first year.”

Having missed her Thanksgiving-break chance to sign up, Lizzie Bunnen was going to get it done in early December. Then finals got in the way. Then travel.

She finally enrolled in a gold plan on healthcare.gov without “too much difficulty,” she said. But she didn’t immediately get a confirming email from either the portal or the insurer.

“So I’m concerned that my application never actually made it” to the insurance company, she said.

Young Invincibles’ Decision: To Get Coverage Or Not